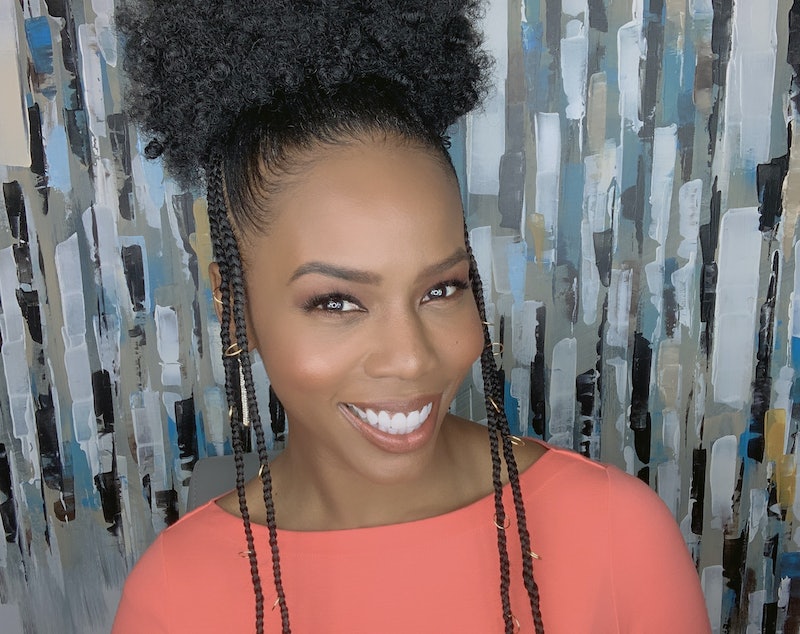 When celebrities (virtually) hang out with Bustle writers, we want to give them the chance to leave their mark. Literally. So we hand them a pen, a piece of paper, a few questions, and ask them to get creative. This time P-Valley star Brandee Evans is leaving her mark in the Bustle Booth.

On Starz’s P-Valley, Mercedes is the most popular dancer and beating heart of The Pynk, the fictional Mississippi strip club where the show is set. As a dancer who performed professionally alongside acts like Kelly Rowland, Katy Perry, and Snoop Dogg, Brandee Evans knew how to imbue Mercedes with the power and sensuality she’d need to make the character feel real. “My life prepared me for this role,” the actor tells Bustle. “I don't know anyone that hustles harder than me.”

She certainly hustled for her audition, during which Evans recalls playing Beyonce’s “6 Inch” on loop and asking the casting director to push the tables back for her routine. Then she pulled off a front handspring in 6-inch stilettos. Needless to say, she booked it.

Evans’ own background has plenty of overlap with Mercedes in ways that extend beyond onstage finesse. Like her character, Evans grew up in the South and is the daughter of a pastor. They both got their start coaching dance teams before they started dancing for a living. But where Mercedes cuts her teeth at a strip club in the Mississippi Delta, Evans was an NBA dancer before taking off on tour to dance with musicians.

Evans didn’t have to strain for common ground with her character so much as she had to tap into her own past — painful parts included — to fully realize her performance. In making the shift from teaching high school English to working in the entertainment industry full time, Evans endured the loss of her daughter, the end of her marriage, and a period of homelessness. “There were moments where I felt on top of the world, then all of a sudden, things would come to a halt. You just never know where your next job is going to come from in this industry,” she says. “I was able to feel [that hustle] in Mercedes.”

Though Evans knew she had the dance experience for the role, pole dancing in bedazzled bras required her to learn an entirely new skill set. In addition to her own training and preparation, she traveled across the country, meeting dancers and going to clubs to witness their awe-inspiring feats of athleticism on the pole firsthand. Immersing herself in their world not only shifted her perspective on stripping as a profession, but gave her a new level of confidence in her body.