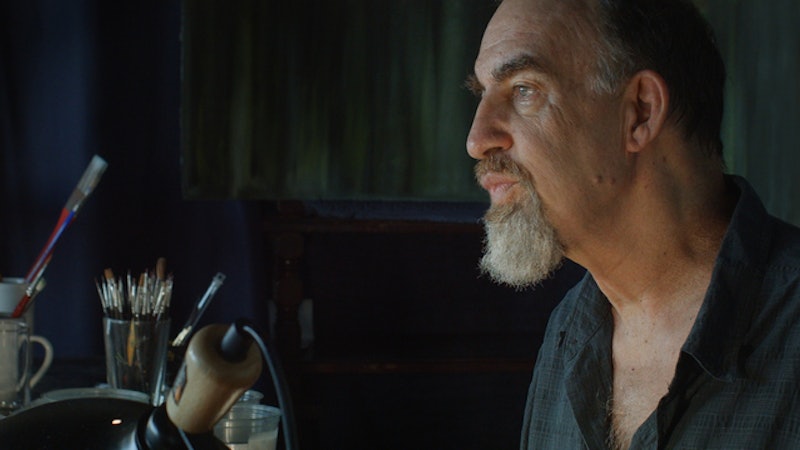 If you tuned in to the first season of HBO’s Painting With John expecting to paint with John Lurie the way we once painted alongside Bob Ross, you were likely surprised by what you found instead. The series — written, directed, scored, and starred in by Lurie — is more like an episodic video essay, a travelogue of the Caribbean home where Lurie makes his art and thinks about his past. Viewers don’t learn to paint at all, but watching Lurie's watercolors puddle and migrate along the dimples of the paper will leave you feeling meditative and relaxed, like actually painting might. Watching it could even cure you of the desire to paint.

Fortunately for fans of the pensive, offbeat program, John shall paint again. On Aug. 17, HBO announced that Painting With John was officially renewed for a second season. While HBO has not yet revealed a specific release date, the good news should be enough to tide you over until more information is available. If it’s not, well, another Lurie program might do the trick for those craving more off-kilter curative content. Enter Fishing With John.

In this 1991 series, Lurie goes fishing, but, like on Painting, he doesn’t really teach his audience much about it. The difference is that while Lurie knows how to paint, he didn’t know much at all about angling when he decided to round up some entertainment world friends and make a show about it. He faces off with sharks in Montauk with Jim Jarmusch, goes ice-fishing with Willem Dafoe in Maine, and sees Thailand with Dennis Hopper in a two-part season ender, all of which is available on the Criterion Collection website.

The failure to teach the audience anything feels more intentional on Fishing than on Painting; if anything, that joke is the whole point of the show. “These are real men doing real things,” a narrator booms as Lurie and Dafoe attempt to build themselves a shelter with little sense of expertise. It’s a parody of a show about learning to fish.

But Lurie’s comic sensibility and naturalistic storytelling are just as present as they are on his painting show, where the fact that painting will not be taught feels more accidental. Lurie wanted the new show to be instructive, he admits in the second episode, but he realizes now that he’s already started making it that he paints from instinct rather than study. So instead he tells you stories about his life to fill the time, same as he does on Fishing With John. Think of it as a predecessor to Painting With John, less earnest and confessional but just as loose and reflective.

More like this
Here’s What Happens To Bill & Frank In 'The Last Of Us' Video Game
By Brad Witter
The 'Gossip Girl' Reboot Creator Is “Looking For A New Home” To Air A Potential Season 3
By Brad Witter
The 8 Best Aidan Shaw Moments On 'Sex And The City'
By Grace Wehniainen
Everything To Know About 'The Real Housewives Ultimate Girls Trip' Season 4
By Jake Viswanath
Get Even More From Bustle — Sign Up For The Newsletter
From hair trends to relationship advice, our daily newsletter has everything you need to sound like a person who’s on TikTok, even if you aren’t.