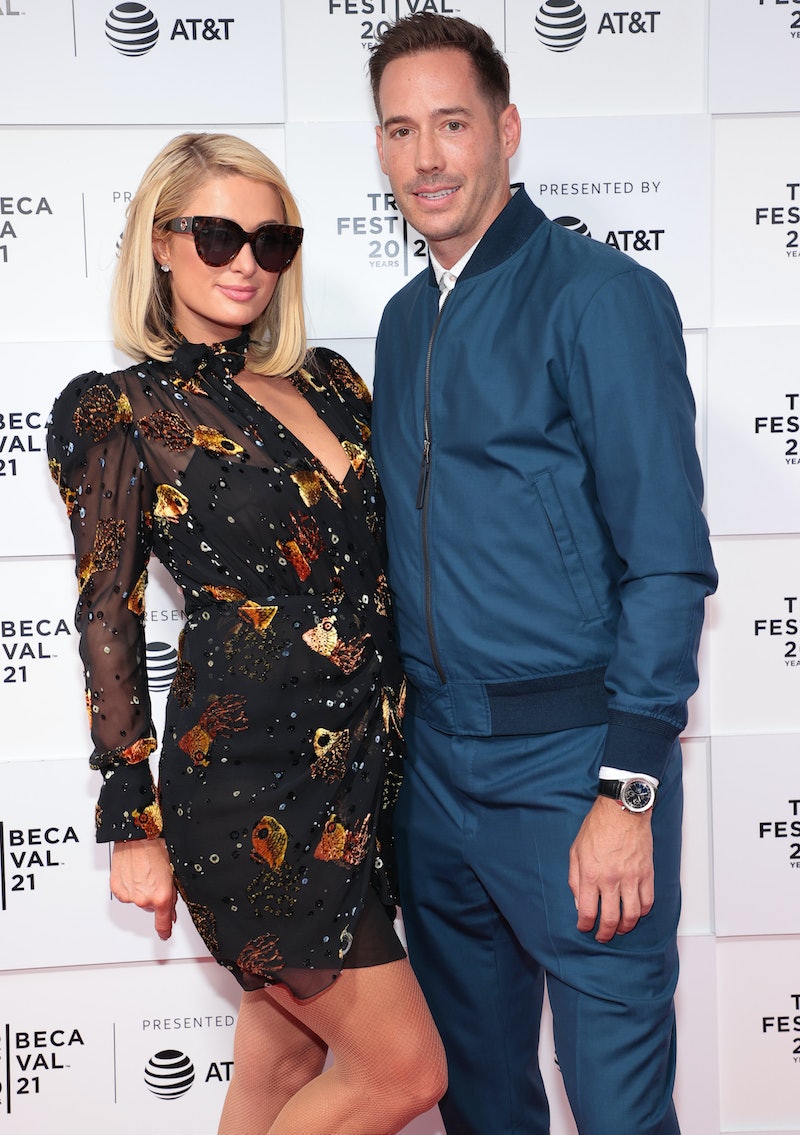 From her revealing documentary and her Cooking With Paris Netflix series to her February engagement news and vocal support of the #FreeBritney movement, it’s been a busy year for Paris Hilton — and for a brief moment, it seemed like it was about to get busier. On Tuesday, July 27, Page Six “exclusively learned” that Hilton and fiancé Carter Reum are expecting their first child together. And after receiving roughly 3,000 congratulatory texts, Hilton set the record straight on her This Is Paris podcast.

“I am not pregnant,” the heiress confirmed. “Not yet. I am waiting until after the wedding.” She also seemed confused as to what prompted the rumors in the first place. “I don’t know how this rumor started, but I’m assuming that it was the Paris Hilton push-up bra from my new lingerie line,” she said, adding that she wore the garment while out to dinner with her fiancé. “We went to Nobu in Malibu and I guess people got some shots and they put them out and now they have a very reliable source that says, ‘Paris Hilton is pregnant.’ People always make up rumors.”

Paris wasn’t the only one who slammed Page Six’s report. According to Vanity Fair, Nicky Hilton shut down the rumors about her sister while on a cover shoot for Avenue magazine. “It’s not true,” she said. “They have the story wrong.” At that point, Paris hadn’t addressed the rumors herself, but there was nothing on social media that indicated she was pregnant. Her Instagram Story, for example, featured snippets of wedding planning, her cooking show, and a corner of her home that was full of dog toys, including a stuffed car with a “2 HAUTE” license plate.

Although she’s not expecting at the moment, Hilton has been very vocal about wanting to be a wife and mother someday. “I never had let anyone fully in until now, and I am just so excited for that next step and to get married and have babies and just finally be as happy as I always wished,” she told Entertainment Tonight in September. “I’m always gonna be a boss babe but I’m also gonna be a grownup and I’ll be a mom and wife.”

Hilton and Reum first shared their engagement news in February. “As we walked along to dinner along the beach, Carter led us to a cabana adorned with flowers and dropped to one knee,” she wrote at the time. “I said yes, yes to forever. There’s no one I’d rather spend forever with.” One month prior, she revealed that she had been undergoing IVF treatments. “We have been doing the IVF, so I can pick twins if I like,” she said on “The Trend Reporter with Mara” podcast. “Kim [Kardashian] is actually the one who told me about that. I didn’t even know anything about it.”

Reum is a venture capitalist and partner at M13, whose portfolio includes Lyft, Snapchat, FabFitFun, and a host of familiar companies. Upon their engagement, he praised his wife-to-be to People — and revealed that parenthood was always in the cards for the couple. “She shines with her kindness, work ethic, authenticity, and her voice in making the world a better place,” Reum said, “and she will do the same as a future mother and wife.”

Elsewhere in the July 27 episode of her podcast, Hilton reassured listeners that while she’s not currently pregnant, she “will be after the wedding.” “I can’t wait to have children in 2022,” she continued, “but like I said, I am just preparing for the wedding right now. She also urged people not to believe everything they read on the internet. “I’ve learned that over the years of being in this business and just having so many rumors made up about me all the time,” she said. “But yeah, this rumor is definitely not true.”

This article was originally published on July 27, 2021