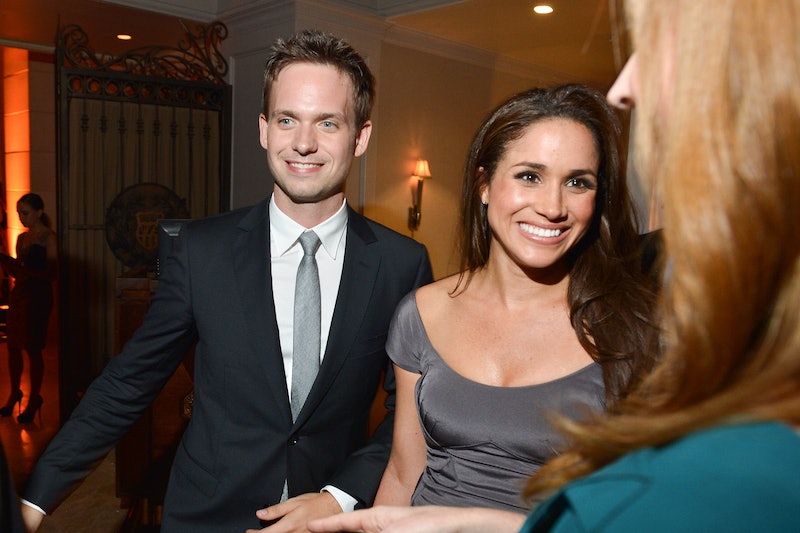 They may have tied the knot onscreen, but former Suits star Patrick J. Adams recently admitted he hasn't spoken to Meghan Markle, Duchess of Sussex, in quite some time, despite the fact that they've remained on good terms throughout the years. But fear not — their lack of communication doesn't mean they're on the outs. On the contrary, Adams has nothing but the utmost respect for his former colleague. He's just been somewhat thrown off by her royal-adjacent status.

“Quite frankly, I think I’m intimidated,” Adams revealed to the Radio Times during a recent interview, as per JustJared. “I have no doubt I could pick up the phone and call her at any moment, but I don’t know what I would say.” Given that, since her 2018 wedding to Prince Harry, which Adams attended with his wife, Troian Bellisario, Meghan has become the Duchess of Sussex, left the royal family, given birth to a baby boy, and moved back to California amidst a global pandemic, it's hard to blame Adams for feeling hesitant to reach out. Although, there is one subject matter that has brought them back together on some level: the birth of their children who are just one year apart in age. Adams' daughter is 2 years old while Meghan's son, Archie, turned one in May 2020.

“After our children were born, there were some texts sent and gifts sent, but I guess I’m a little scared,” he elaborated. “I think it’s pure fear. I guess I’m scared about the idea of breaking through whatever walls exist to have that conversation.”

That's not to say that Adams wouldn't jump at the chance to take their little ones on a play date together should the opportunity present itself, especially now that Meghan and Archie are living in the United States. "I leave that in Meghan’s court, she's an extremely busy woman," he told Entertainment Tonight when asked about them ever getting together. "I'm super happy to have her back on this side of the water, and I would love to see her again soon. She's incredibly busy, so hopefully time will allow, but I'm proud of everything they're doing. I think it's pretty great."

More like this
Lilibet Had The Most Adorable Reaction To Prince Harry’s Dancing
By Sam Ramsden
Meghan Markle Might Be Returning To The UK For A Very Special Reason
By Sam Ramsden
Tyler Perry Makes Rare Comment About Meghan Markle & Prince Harry's Love Life
By Radhika Menon
Everything To Know About Taylor Swift’s 10th Studio Album, 'Midnights'
By Grace Wehniainen and Jake Viswanath
Get Even More From Bustle — Sign Up For The Newsletter