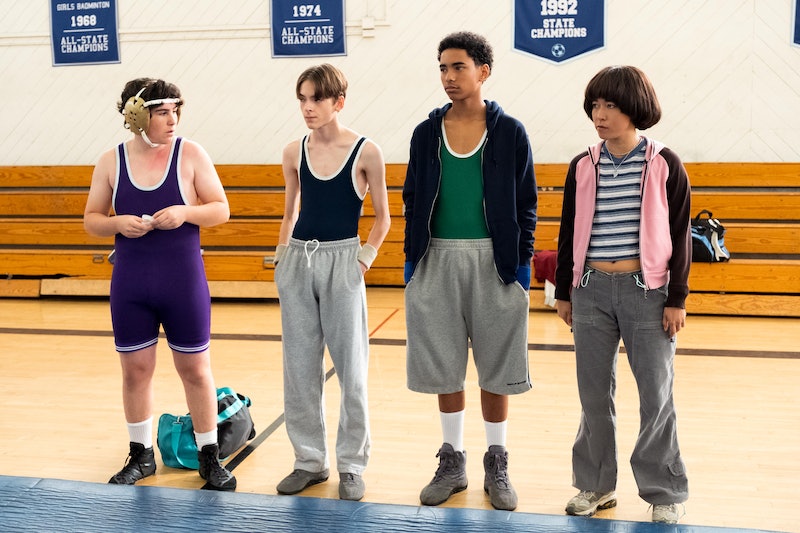 Spoilers ahead for PEN15 Season 2. Maya Ishii-Peters (Maya Erskine) may be a little boy crazy, and Anna Kone (Anna Konkle) does not approve. After Brandt feels them both up at the school dance, Maya's crush on him reaches frenzied heights in Season 2. Her desire to be closer to him leads to Maya and Anna joining the wrestling team, where Brandt is the star.

Maya claims that she wants to join because she's done with girls, who have been slut-shaming them both since the school dance. (Brandt, of course, is praised as a player.) Anna knows that Maya is really just trying to stalk Brandt, so she's not keen on fueling her best friend's obsession. It's only when older boy Andy (Brandon Soo Hoo) mentions that WWE Diva Trish Stratus is hot and has his "mad respect" that Anna ends up seeing the allure of the sport. After all, being viewed as beautiful and powerful is an intoxicating prospect for a teen girl, especially one who feels awkward and powerless in pretty much every situation she's in.

So Maya and Anna throw themselves into wrestling, and for one episode, it becomes an all consuming pastime for them, complete with a hilariously frenetic training sequence. But like most journeys that Anna and Maya — and most middle schoolers — embark on, their new venture doesn't go as well as they would have hoped. Brandt avoids Maya like the plague, and in their first match, Sam (Taj Cross) reveals that the boys have been calling them both "BSBs" — Big Smelly Bushes. Dejected to find out that boys gossip just as harshly as girls do, the two quit the team, and wrestling never comes up again.

It's an amusing one-off plot that also brings up the idea that athletics, and particularly a very rough-and-tumble sport like wrestling, is a form of emotional catharsis — one that has historically been denied to girls. Though the number of girls wrestling on boys' teams has grown into the thousands since 1994 according to the National Wrestling Coaches Association, only 12 states actually allow girls to wrestle in championships, and many people still have outdated ideas about what sports girls are allowed to participate in. This ripples into the professional leagues: women's wrestling was only added to the Olympics in 2004, and the gender pay gap still persists in every league. Even Trish Stratus herself fought hard to legitimize the idea that women could be just as entertainingly brutal as men, in a time when no one took professional women wrestlers seriously.

Why shouldn't Maya work off her horniness and Anna her anger in a physical way when it's considered socially acceptable for boys to do the same?

But unlike other sports movies and TV shows like GLOW, Bend It Like Beckham, and A League of Their Own, PEN15's focus in this episode isn't on the nuts and bolts of how women try to carve out spaces for themselves in male-dominated sports. Rather, the episode looks inward into the psyches of its characters, suggesting that Maya and Anna's foray into wrestling is part of their search for an outlet for a very specific yet universal brand of teenage-girl rage. Though Maya and Anna initially join the team for superficial reasons, they end up finding a brief freedom in being able to literally wrestle with their problems — even when their male teammates mostly refuse to pair up with them. And why shouldn't Maya work off her horniness and Anna her anger in a physical way when it's considered socially acceptable for boys to do the same?

While Maya joins the team to get closer to a crush, for Anna, the reasons for why she hits the mat are more complex. Though it appears she just wants to feel as attractive as Trish looks in Andy's eyes, it later becomes obvious that she too has plenty of bottled up anger. The mat is where "you let all your rage out," the coach informs them. "Not at your mom, not at your date." As Anna's parents' marriage breaks down further, it's Anna who shoulders their frustrations alongside her own. By the second episode they've split up the house to avoid each other, and they squabble about what appear to Anna to be the most inconsequential things.

After watching Trish dominate on TV, Anna fantasizes about being someone else — Anna the Anna-hilator — in a far away ring. Her crush Alex cheers her on in the background, telling her she's both hot and formidable. She then body slams her opponent: the ugly grey pillow her parents argued over, a physical manifestation of their broken relationship. Her dad's words echo in her mind: "Life has a way of pummeling you. I hope you learn how to pummel back."

PEN15's approach to serious topics is often simultaneously silly and heartbreaking, but it always contains a sliver of truth. "Wrestle" ultimately tells us that girls have just as much anger and just as much drive as boys, and if they want to express that by grappling a person to the ground instead of talking it out? Well, then that's probably okay, too.