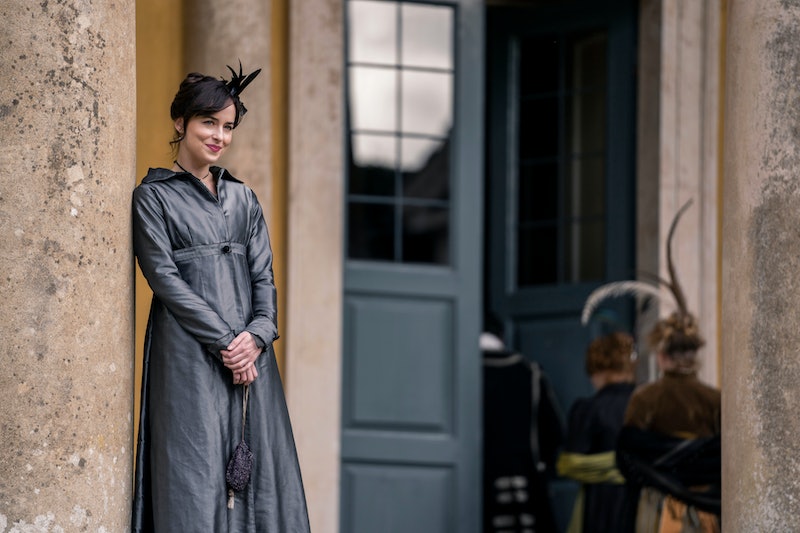 From the first trailer for Netflix’s new adaptation of Persuasion, it was clear that the film would diverge substantially from the source material. Where Jane Austen’s novel is sober, melancholy, and ruminative, the trailer featured lead actor Dakota Johnson winking at the camera, Fleabag-style, and uttering the glaringly anachronistic line, “Now we’re worse than exes. We’re friends.” Austen fans were not happy, but waited to see what the full feature had in store.

Now that the film’s been released, critics have not been kind: As of this writing, the Carrie Cracknell-directed film has a dismal 33% score on Rotten Tomatoes. L.A. Times critic Justin Chang wrote that the movie “appears to have lifted sentences from [Persuasion] and fed them through some kind of Instagram-filtering, catchphrase-generating, text-summarizing idiot bot.” Devotees of Austen’s novel — and of its self-possessed heroine, Anne Elliot — are no doubt agonized by the film’s dire reception, while viewers of the movie who haven’t read the book are likely wondering what on earth the furor is about.

Below, an overview of the key differences between the novel and the film.

What’s the original Persuasion about?

Persuasion is Jane Austen’s final completed novel, published six months after the author died in 1817. It’s considered her most mature, serious novel — though hardly without her signature satirical humor — and it focuses on Anne Elliot, a 27-year-old woman who still regrets an engagement she broke off at the age 19. Though she was deeply in love with Frederick Wentworth, a young (and not-very-rich) naval officer, her family rejected the match on the grounds that he didn’t have promising prospects. Though 27 seems young in 2022, it was old for an unmarried woman in 1817, and when the novel begins, Anne is considered a spinster.

Due to her father’s overspending, the Elliot family — which consists of Anne, her father, and her sister Elizabeth — must rent out their estate and move to a smaller home in the city of Bath. As luck would have it, the new tenants renting their home know Wentworth. Anne goes to stay with her married sister Mary, who lives near the family estate, and is therefore reunited with her ex-fiancé, which causes her great distress and emotional turmoil. Over the course of the novel, Austen explores both this fraught relationship, Anne’s struggles as an older, under-appreciated single daughter, and the subtle class tensions between Wentworth, the Elliot family, and a wealthy male cousin who is set to inherit the Elliots’ estate.

By and large, Netflix’s Persuasion, which was adapted by Alice Victoria Winslow and Ron Bass, sticks to the plot of Austen’s novel. (For one significant plot change, see below.) Wentworth does come back into Anne’s life through the Elliots’ tenants, a couple called the Crofts, and Anne does temporarily stay with her sister Mary (Mia McKenna-Bruce) and her in-laws, one of whom becomes infatuated with Wentworth (Cosmo Jarvis). As in the novel, that in-law, a young woman named Louisa (Nia Towle), later injures herself at the seaside town of Lyme Regis, which sets the film and the novel’s final act into motion — one that eventually sends Anne and Wentworth back into each other’s arms, though not before a good deal of angst.

It’s hard to appreciate the film’s basic fidelity to the novel’s plot, however, when Cracknell, Winslow, Bass, and Johnson so fundamentally misapprehend the novel’s tone and misinterpret its beloved central character. The problem with Persuasion isn’t that the movie gets the plot wrong, it’s that it doesn’t convey how it feels to read the book. All film adaptations have to change plot details, or cut storylines, in order to fit hundreds of pages of text into a couple of hours of runtime. But the most successful adaptations — like Clueless, Amy Heckerling’s riotous modern adaptation of Emma — capture the essence of their source material.

On that score, this Persuasion fails. Instead of keeping her emotions under the surface, Johnson’s Anne lets everything out. She flops on her bed, drinks to forget, and shouts Wentworth’s name at him from an open window. She smirks at the camera when her sister Mary annoys her, instead of just enduring her company, like a dutiful — and single — older sister must. Other characters also lack subtlety. In the novel, Wentworth is a charming, accomplished man who has been around by the time he returns to Anne — and, we discover, has arranged to visit the Crofts specifically to meet her. In the film, Wentworth doesn’t say much, and his personality has been replaced with a dilemma about whether or not to retire from the navy in order to start a family. In general, the film bypasses Austen’s superlative grasp of subtext, and instead has characters explicitly explain their feelings, opinions, and schemes to each other.

Okay, that sounds bad. But what about the plot?

Aside from mischaracterization and general tone problems, this filmed version of Persuasion makes one major change from the novel. As mentioned above, in the book, the Elliot family’s cousin William Elliot will inherit the family’s estate. The only way the house will stay in their family, therefore, is for him to marry one of the Elliot daughters. (Austen used a similar plot device in Pride and Prejudice, in which the Bennet sisters’ cousin, the unappealing Mr. Collins, will inherit their home.) Anne encounters William in Lyme Regis, where he flirts with her, implicitly suggesting that the two might marry. Although the idea is tempting to Anne, she still loves Wentworth, and finds something about William off-putting.

It turns out that Anne’s instinctive judgment of character is right: When she and her family move to Bath in the final portion of the novel, she reunites with a widowed school friend, Mrs. Smith. From her, she learns that William tricked the late Mr. Smith into debt, and as executor of his estate has been harsh and punitive. He has also been courting her sister Elizabeth’s companion, Mrs. Clay (a widow), to ensure that she does not marry their father, Mr. Elliot. Should that marriage take place, and Mrs. Clay have a son, William would lose his inheritance. At the end of the novel, Wentworth assists Mrs. Smith in rectifying William’s predatory behavior as her executor, and Mrs. Clay becomes William’s mistress.

The film dispenses with Mrs. Smith entirely, and by extension William’s more distasteful behavior. Instead, William (Henry Golding) is a sly figure who courts Anne and proposes to her while seeing Mrs. Clay (Lydia Rose Bewley) on the side. At the end of the film, William and Mrs. Clay are married. This series of changes makes very little sense. The film is, on the whole, uninterested in class, so its omission of Mrs. Smith is unsurprising, if disappointing. But William need not marry Mrs. Clay to keep her from marrying Mr. Elliot, as Austen’s novel shows. If he does choose to marry her, though, why bother courting Anne?

These changes, in addition to being confusing, smooth over the most upsetting edges of Austen’s novel — a choice that is consistent with the film’s changes to the book’s melancholy tone. Though most today think of Austen as the first true romance novelist, her books were replete with satire and social commentary, some of which was depressing. Though Mrs. Smith’s situation is improved by the end of Persuasion, Austen still carefully depicts the circumstances of a widowed woman at the mercy of a heartless man who controls her finances; similarly, she does not shy away from the reality that a charming, wealthy man could persuade a woman from a lower social class to be his mistress.

This adaptation, however, erases all these uncomfortable complications, and instead presents a slick, meme-able version of the novel. Viewers may find the film entertaining, but it won’t stick with them long after the credits have run.

More like this
Let’s Talk About Dakota Johnson’s Hair In 'Persuasion'
By Morgan Leigh Davies
Everything To Know About Netflix's Marilyn Monroe Movie 'Blonde' Starring Ana De Armas
By Grace Wehniainen
'The Sandman’s Ending Is A Departure From Neil Gaiman’s Comic Book Series
By Kadin Burnett
'Bridgerton’s Jonathan Bailey & Simone Ashley Just Teased A First Look Of “Kanthony” In Season 3
By Grace Wehniainen, Alyssa Lapid and Sam Ramsden
Get Even More From Bustle — Sign Up For The Newsletter