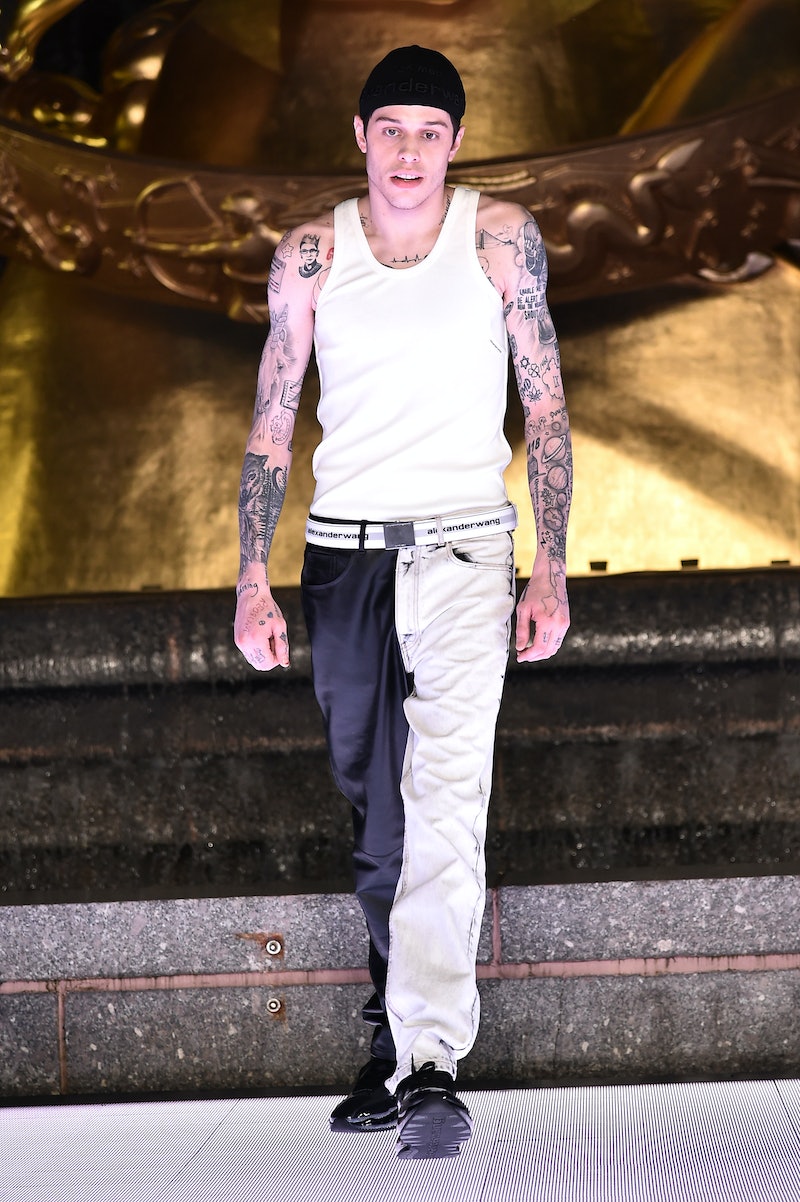 Some things in Hollywood seem permanent: Taylor Swift writing music, Nicole Kidman and Keith Urban's marriage, and Pete Davidson's tattoos. But now, his infamous ink may not last much longer. On Dec. 17, it was reported that Davidson might be removing all of his tattoos, and even though the comedian hasn't confirmed it himself, fans are already losing their minds at the thought.

According to a tweet by film critic Mike McGranaghan, Davidson was participating in a virtual Q&A about his critically acclaimed film, The King of Staten Island, when he revealed the shocking news. "Here's a scoop: Pete Davidson is in the process of getting all his tattoos removed!" he wrote. When a fan asked if Davidson was being serious or simply kidding, McGranaghan said that the comedian provided proof. "No, it's real. He even showed his hand, which is already done. He said it takes 3-4 hours in the makeup chair to cover them, so he figured 'it would be easier to get them burned off.'"

The Saturday Night Live star reportedly has over 100 tattoos, including one of Hillary Clinton and another of recently deceased Supreme Court Justice Ruth Bader Ginsberg. Additionally, he paid tribute to his late father, a firefighter who died on 9/11, with the number "11" behind his left ear. When he was dating Ariana Grande in 2018, he also got matching ink with the singer that said "Mille Tendresse" on the back of his neck. After their split, he had that one covered up with the word "cursed."

Now that Davidson might be saying goodbye to his tattoos, fans have taken to social media to express their shock, heartbreak, and outrage. One fan claimed to be losing sleep over the comedian's reported decision to remove his tattoos; another fan compared his decision to a divorce.

Although Davidson's fans have already started the grieving process, it's worth noting that the SNL star hasn't yet addressed the report himself. Bustle has reached out to his rep for comment and will update this post accordingly.

More like this
‘SNL’ Finally Spoofed Nicole Kidman’s Weirdly Beloved AMC Ad & Nailed It
By Stephanie Topacio Long
At 14, Jurnee Smollett Was Taking Meetings With Missy Elliot & Lauryn Hill
By Chloe Foussianes
Shonda Rhimes' Net Worth Makes Her One Of The Wealthiest People In TV History
By Hugh McIntyre
How Much Are The 'Schitt’s Creek' Stars Worth?
By Hugh McIntyre
Get Even More From Bustle — Sign Up For The Newsletter