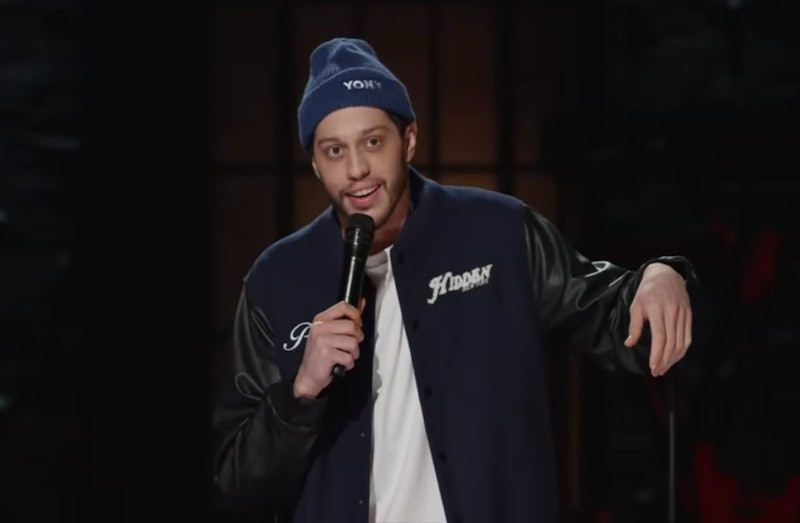 Netflix Is A Joke/YouTube/screenshot
By Brad Witter
May 7, 2022

During his first stand-up comedy special in over two years, Pete Davidson roasted Kanye West, and on May 6, Netflix finally released the full clip. The Saturday Night Live star, who’s been dating West’s ex Kim Kardashian since last fall, began by addressing his “really weird year,” including what he referred to as “an AIDS scare,” during his April 29 Netflix Is a Joke festival set.

After insisting that he hasn’t been “sharing needles,” “doing heorin,” or “having tons of unprotected sex,” Davidson explained, “No. Kanye told me I had AIDS. And he’s a genius. So, I was like, ‘Oh, f*ck.’ I was like, ‘I better call my doctor. The guy who made College Dropout thinks I have AIDS.’”

In January, DJ Akademiks claimed on Twitch that he’d heard from eight people that West was “trying to spread” the AIDS rumor. Soon afterward, TMZ and Page Six reported the same information via unnamed sources, but an insider close to the rapper called the unfounded claims “nonsense” at the time. Even so, Davidson joked during his Netflix set that he visited a doctor’s office anyway, just to make sure “genius” West wasn’t right. “So a doc told me I don’t have AIDS,” he quipped, adding, “I just look like I have it. So it’s a completely different thing.”

Because the HIV/AIDS epidemic was at its height in the 1980s, Davidson observed that West’s alleged diss was “such an old-school thing” to say. He said that even pal John Mulaney called him with a similar thought. “He’s like, ‘AIDS? You should spread a rumor that he has polio,’” Davidson told the sold-out crowd at Hollywood’s Fonda Theater.

Having finally addressed West’s behavior, Davidson also asked attendees if anyone else secretly hopes that “Kanye pulls, like, a Mrs. Doubtfire,” referencing the 1993 movie in which Robin Williams’ character, a newly separated father, dresses as an elderly female housekeeper in order to spend time with his children. “I come home one day and they’re like, ‘This is the new housekeeper.’ And he’s like, ‘What’s up, fam?’” Davidson added, imitating the Grammy winner, who shares children North, 8, Saint, 6, Chicago, 4, and Psalm, 2, with Kardashian.

Admitting that the public feud has been a “really weird thing to go through,” the King of Staten Island star also shared that his friends don’t even know what advice to give him. After West repeatedly harassed him on social media and then appeared to kidnap, tie up, and bury him alive in his “Eazy” music video, loved ones could only offer their support. And while Davidson’s friend Jack Harlow was featured on West’s “Louie Bags” track this year, the comedian holds no hard feelings. If longtime pal Bill Burr were to ever attend one of West’s Sunday Service events, though, Davidson’s feeling might be hurt, he joked.

West, for his part, has not addressed Davidson’s comments — yet, anyway.