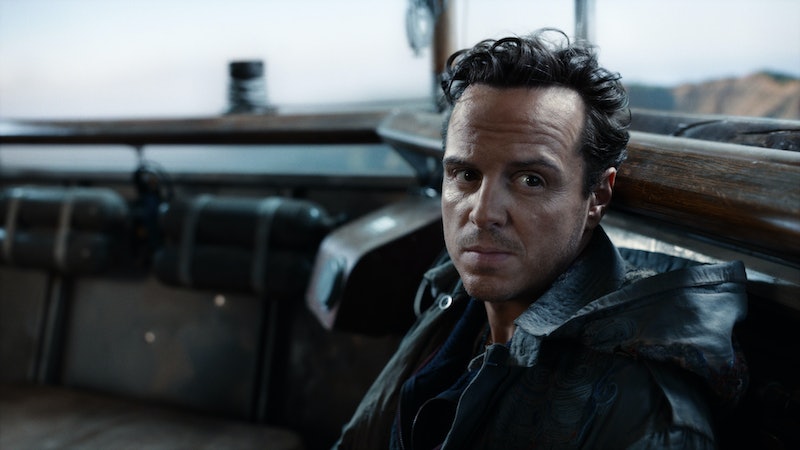 The BBC and HBO adaptation of Sir Philip Pullman's bestselling novels, His Dark Materials, is back for Series 2. The trailer for the new season, which will cover the second book in the fantasy trilogy, was unveiled at Comic-Con@Home. But a glimpse at what's in store for fans when the show returns wasn't the only exciting thing to come out of the event. At the series panel, Andrew Scott, who will play explorer Colonel John Parry, revealed some big casting news, too. Phoebe Waller-Bridge will voice the dæmon of Andrew Scott’s character Colonel John Parry in His Dark Materials Series 2.

In Fleabag, Waller-Bridge and Scott’s will-they-won’t-they romance had audiences on the edge of their seats and gave rise to Scott’s “Hot Priest” moniker. When revealing the reunion, Scott kept viewers on tenterhooks by saying that his dæmon would be played by “someone who is very close to me in my real life” before revealing that it would be “a young performer and writer called Phoebe Waller-Bridge.”

In Pullmans’ His Dark Materials universe, dæmons are a physical manifestation of a person's "inner-self" that takes the form of an animal. Despite the Colonel’s dæmon Sayan Kötör being an osprey in the books, fans are already picking apart the rumour mill in the hope that, for the sake of irony, Waller-Bridge will play a fox. Scott, of course, played the fox-averse “Hot Priest” in season two of Waller-Bridge’s critically acclaimed comedy, Fleabag.

Scott added: “I’m really thrilled about that because it’s all about companionship and friendship and loyalty and that’s what I feel about Phoebe in my real life so it’s wonderful that it’s happening.”

The series stars Dafne Keen as the trilogy’s protagonist Lyra Belacqua, a headstrong young adventurer. The first season ended with Lyra’s father Lord Asriel (James McAvoy) betraying Lyra to open a bridge to a new world, where she followed him into the unknown. Series 2 will pick up in the mysterious abandoned city of Cittàgazze, where Lyra meets Will (Amir Wilson). The trailer reveals Scott as Colonel John Parry, Will’s father, for the first time, and gives fans a first look at Lyra and Will meeting up for in the strange new world.

Series two of His Dark Materials is touted for a November 2020 release date.

More like this
‘The Simpsons’ Will *Finally* Address How They “Predict The Future”
By Sam Ramsden
The Bestselling Novel 'The Doll Factory' Will Be Adapted Into Thrilling TV Series
By Catharina Cheung
'House Of The Dragon' Shares Some Iconic Filming Locations With 'Game Of Thrones'
By Darshita Goyal
Kenneth Branagh Looks & Sounds *Exactly* Like Boris Johnson In 'This England'
By L'Oréal Blackett, Rachel Mantock and Sam Ramsden
Get The Very Best Of Bustle/UK