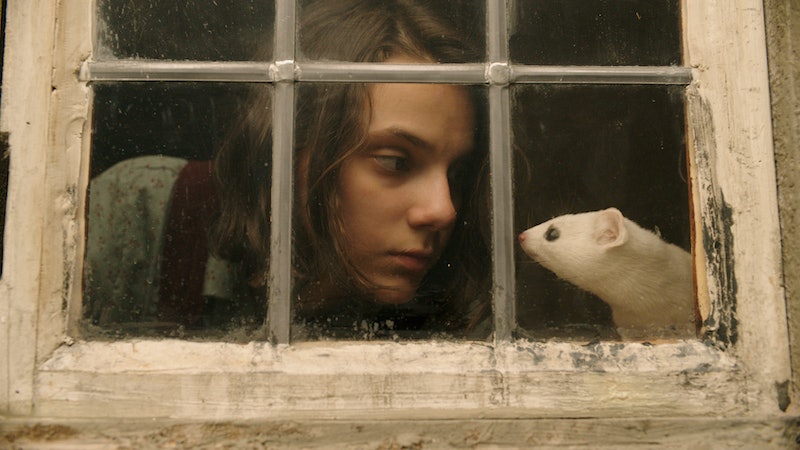 Move over, patronuses. (Patronusi?) Daemons are the hot new animal companions in town, thanks to HBO's adaptation of author Philip Pullman's bestselling fantasy series. But how do daemons work in His Dark Materials, exactly? If you haven't read The Golden Compass (or its sequels, The Subtle Knife and The Amber Spyglass), you may be unfamiliar with the concept — and while the premiere episode of the HBO series, "Lyra's Jordan" introduced some of the fundamentals, the relationship between human and daemon is complex and requires a deeper analysis to fully grasp.

The very existence of the daemons has been the biggest stumbling block to bringing Pullman's series to screen since its publication in the '90s. For a while, technology wasn't advanced enough to render so many shape-shifting, talking animals in a convincing enough manner. Even the daemons in the 2007 feature film adaptation of The Golden Compass — which took home an Academy Award for Best Visual Effects — look dated now, and don't hold up against modern audience's expectations of photorealistic digital animals, thanks to movies like The Jungle Book and The Lion King.

In His Dark Materials, fans can finally see Pullman's most fantastical creation brought to vivid life. The premiere alone introduced viewers to a variety of believably rendered daemons like Lyra's Pantalaimon, Lord Asriel's Stelmaria, and Mrs. Coulter's eerie golden monkey. Here's everything you need to know about these fantastic beasts and how they work.

Millions of fans who grew up pronouncing the word in their heads as "day-mon" were shocked when the 2007 film came out and they learned that it was actually pronounced just like the word "demon." The HBO series also uses this pronunciation, proving it wasn't a weird fluke of the movie's, but actually the way the word is supposed to be spoken.

2. They Were Inspired By Da Vinci

In a 2007 interview with Intelligent Life magazine, Pullman revealed that his original inspiration for the idea of daemons was the Leonardo Da Vinci painting The Lady With An Ermine, in which the artist seems to be suggesting some sort of "psychological link between the person and the creature."

3. A Daemon Is A Soul In Animal Form

It's unclear where exactly daemons come from — do they simply materialize out of thin air at the moment of birth? — but what is clear is that they are so much more than mere pets. These aren't animal companions that a person goes out and selects: a person's daemon is a part of their very being, as integral to their existence as breathing, as inseparable as their own beating heart, with them from the moment they come into the world until they leave it.

Since daemons are an outward manifestation of a person's innermost soul, they also take on the traits of their human: inquisitive, cautious, friendly, aloof. All daemons are capable of speech, but some choose to remain silent, refusing to divulge their human's innermost thoughts and intentions to the world; this can be due either to simple shyness or to calculated concealment, depending on the person.

4. Most People's Daemons Are The Opposite Gender

As a general rule, a daemon tends to manifest as the opposite gender of it human: Lyra's daemon Pantalaimon is male, Lord Asriel's daemon Stelmaria is female, etc. Of course, like every rule, there are exceptions — but people with same-sex daemons are few and far between (and, in Pullman's fantasy world, clearly a coded manifestation of homosexuality).

5. Daemons Change Shape… Until They Don't

The most magical thing about daemons is their ability to shape-shift, taking on the form of whatever animal they choose. Pantalaimon seems to prefer the form of a snow-white ermine, but he can also flit about as a bird or curl up as a cat. This constant transformation represents the malleable, ever-changing nature of a young person's personality as they continue to grow and learn and find themselves.

Eventually, a person's daemon will stop changing and "settle" on their one true form. Once this happens, it's a signal that the person has reached maturity, as seen in the coming-of-age rite that Tony Costa undertakes in the series premiere. After that point, a daemon will remain as that animal forever — until they and their human die.

6. There Are Different Classes Of Daemons

The shape that a daemon ultimately settles on can tell you a lot about a person. People in subservient roles — butlers, maids, clerks — tend to have daemons in the form of obedient animals like dogs. Sailors' daemons tend to be creatures of the sea; witches (which exist in this world) always have daemons in the form of birds. People with more eccentric or "powerful" personalities might have daemons that take more unusual forms: see Asriel's snow leopard and Mrs. Coulter's golden monkey.

7. It's "Taboo" To Touch Someone Else's Daemon

While a person can talk to somebody else's daemon and even have a friendly relationship with them, the one thing you can never ever do under any circumstances is touch a daemon that does not belong to you. The bond between a human and daemon is so intensely personal that putting your hands on someone else's companion is seen as the worst affront you could possibly make in this world. It's akin to ripping someone's soul out and groping it with dirty fingers; it's unnatural, unthinkable, and absolutely forbidden.

8. Daemons Can Touch Each Other

9. Daemons Must Stay Close To Their Humans

The other physical rule of daemons is that they must always be in close proximity to their human. This proximity is not cleanly defined and can vary slightly from person to person, but it tends to be no more than a few yards; after that point, a strain can be felt between human and daemon, which takes a painful physical toll on both beings — and can even weaken them if the limits are tested for prolonged periods of time.

If the connection is stretched too far, it can even snap, permanently severing a human from its daemon; that connection can never be reformed, even if the companions are reunited. Neither will ever be the same again, with the human rendered a soulless shell of their former self, and the daemon diminished into an insubstantial shadow.

The only exception to this are witches, who, thanks to their magic, are able to exist at great distances away from their daemons — an ability which is seen as deeply unnatural by regular humans.

10. Only Humans Have Daemons

Although humans aren't the only sentient race of beings in this parallel universe, they are the only ones who have daemons. The other species of intelligent, talking animals that populates this world — the panserbjørn, also known as "armored bears" — do not have such soulful companions… although some want their own daemon so badly they're willing to go to great lengths to obtain one.

11. Daemons Disappear When Their Humans Die

As Lyra and Roger discussed when they ventured into the crypts beneath Jordan College, daemons don't rot and turn into bones and dust like their human counterparts. Instead, daemons simply vanish, dissolving into atoms at the moment of their human's death. Conversely, if a daemon is ever killed, such an action would result in the instant death of their human as well.

His Dark Materials will undoubtedly explore the sacred bond between human and daemon even further as it continues to unspool its story and sends Lyra off on an adventure that will bring revelations both surprising and, occasionally, horrifying. At least she has Pan by her side to help her through.

More like this
The 'Gossip Girl' Reboot Creator Is “Looking For A New Home” To Air A Potential Season 3
By Brad Witter
'Succession' Season 4 Will Be An "Absolute Banger" According To Cousin Greg
By Bustle Staff
All The ’70s Easter Eggs You Missed In 'That ’90s Show'
By Grace Wehniainen
This 'Gossip Girl' Wardrobe Error Has Gone Viral On TikTok
By Alyssa Lapid
Get Even More From Bustle — Sign Up For The Newsletter
From hair trends to relationship advice, our daily newsletter has everything you need to sound like a person who’s on TikTok, even if you aren’t.