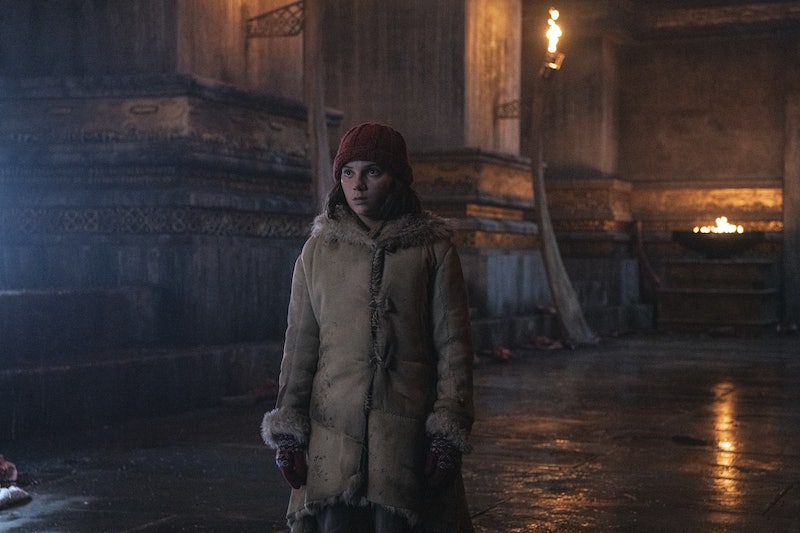 Lyra is all set to have a frozen face-off with her father and potentially her mother in the Season 1 finale of His Dark Materials. While the 2007 movie adaptation of Phillip Pullman's The Golden Compass ended kind of, sort of, there, His Dark Materials is set to return for Season 2. The film hadn't been given that same guarantee, but His Dark Materials executive producer Jane Tranter ensured the HBO series would continue Lyra's story for another season at the outset. So with Lord Asriel and Mrs. Coulter up to no good, Lyra will have a chance to save the day again after the Season 1 finale airs on Dec. 23.

With all the world-building His Dark Materials did with its first eight episodes, it would have been a shame for the show's future to be as up in the air as that mysterious material Dust. But Tranter had another, more practical reason to secure 16 episodes of the HBO and BBC production. The second book in Pullman's trilogy, The Subtle Knife, takes place immediately after the events of The Golden Compass (or, Northern Lights in the UK). As Tranter explained to Entertainment Weekly, production between seasons of TV is often one year. But she wanted to eliminate that time gap so star Dafne Keen wouldn't noticeably age for the events of The Subtle Knife in Season 2.

"Suddenly they're six inches taller and they're a different shape and their voices are different,” Tranter told EW of the pace children can grow between productions. So they finished filming 14-year-old Keen's scenes for Season 1 in December 2018 and she returned to work again by July 2019. "That was basically the biggest gap that we could possibly do and still have her come back and convincingly look like it was moments, hours later [in season 2]," Tranter said. "The BBC and HBO very kindly said, 'Let's make 16 episodes across the two books and go for it.'"

Not only does this timeline mean that Lyra will not look too old for Season 2, but it also means that the second installment is pretty far into production despite not having a set premiere date yet. In fact, Lee Scoresby actor Lin-Manuel Miranda had finished filming his Season 2 scenes a month before Season 1 even premiered.

The fact that the first two seasons were filming back-to-back had been discussed previously during the Television Critics Association summer press tour, but this led to some confusion. The website /Film reported there would only be two seasons total and that information was then picked up by other outlets. In response, head writer Jack Thorne wrote on Twitter that "Pullman's world is way too vast" for only two seasons. Instead, as Deadline reported, Tranter had joked at the TCA that she thought asking for three seasons right off the bat would have been too "greedy," so she settled for two.

As for a Season 3, timing with Keen won't be as much of an issue since there is a time jump in the third book, The Amber Spyglass, and Lyra is around 16 years old. But if renewed, Tranter is already thinking of how she will adapt the third book for TV. She told Deadline in November that since the book is "huge" and "sprawling," she would like to split it into two seasons. She even jumped on Miranda's joke on Twitter about licensing George Michael's song "Monkey" in honor of Ruth Wilson's Mrs. Coulter for a third season.

When they're done telling the original trilogy's story, it doesn't necessarily mark the end of the TV series since Pullman has continued to add to his world. There is the sequel Lyra's Oxford and the Lee-focused prequel Once Upon a Time in the North. Then, there's Pullman's current trilogy, The Book of Dust. The first book, La Bella Sauvage, was published in 2017 and is set when Lyra was a baby. The second book, The Secret Commonwealth, features a 20-year-old Lyra. And the third book hasn't been released yet. When it comes to her Wales-based production company Bad Wolf successfully incorporating all of these stories, Tranter told Deadline, "I'm not saying I could make it happen. I'm just a woman in a shed in Cardiff with a dream, but we've got to start somewhere."

But before the show goes too far into the future, there's Season 2 and The Subtle Knife. Season 1 of His Dark Materials almost immediately set up the events of the second book with the multiple worlds introduced — a major element that wasn't introduced until The Subtle Knife, EW reported. Thorne told The Ringer how this choice allowed the TV show to introduce Will Parry (Amir Wilson) earlier than in the books. Again, Will doesn't appear until the second book, but Thorne noted he was excited to spend more time with this character from the beginning of the TV show because of how important Will and Lyra are to the overall story.

So while TV viewers may not know what's in store for Lyra, her dæmon Pan, and Will, the HBO series is already hard at work on the next chapter of Pullman's series — something The Golden Compass movie never got the chance to do.