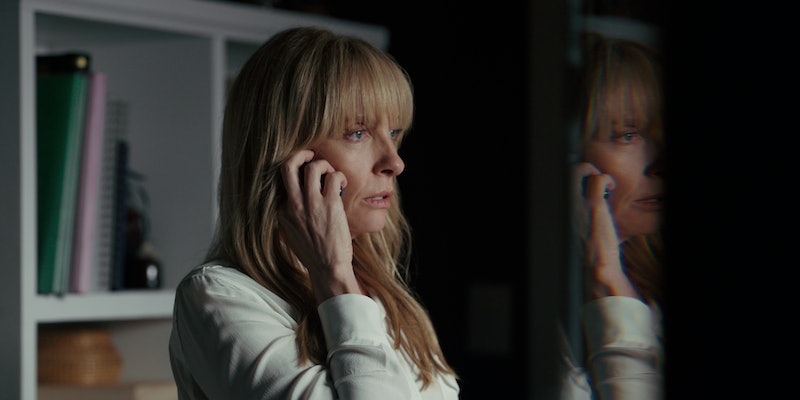 Thriller lovers, get excited: Karin Slaughter’s novel Pieces of Her has been adapted as a limited series starring Hereditary’s Toni Collette, and it’s streaming on Netflix now. Need a refresher before diving into the show? Below, an overview of how the Pieces of Her book ends. Major spoilers for Pieces of Her follow.

First published in 2018, Pieces of Her centers on Andrea “Andy” Oliver and her mother Laura Oliver, a prominent attorney and respected speech therapist. Andy’s world is upended when she discovers during a traumatic episode that her beloved mother may be hiding a deep and deadly secret.

When a young man, armed with a revolver and a Bowie knife, opens fire in a shopping mall where, Laura attempts to reason with him. After he stabs her, Laura takes the weapon from him and slices his neck wide open — all while the knife is run clean through her hand. Andy, in shock, sees everything.

In the aftermath of the brutal incident, Laura is suspected of intentionally killing the shooter, who just so happens to be a police officer’s son. As Andy’s father, Gordon, steps in to defend his ex-wife and daughter from police interrogation, Andy must reckon with what she’s seen her mother do. To make matters worse, Laura pushes her daughter away with orders to move out of their home immediately.

That night, still processing the day’s events, Andy walks in on a man torturing Laura in her own living room. Andy accidentally kills him with a frying pan, but not before contacting the police. With only minutes to spare before the cops arrive, Laura gives her daughter the man’s wallet, his car keys, a handgun, and a key of her own, which unlocks a storage building in a far-off town on the Alabama line. Andy will need to leave her phone behind, make her way to the storage facility, take what’s inside her mom’s unit, and then head for Idaho — all without contacting anyone she knows.

The storage unit contains a car, clothes, $240,000 in cash, and a collection of polaroids. While looking over these things, Andy begins to realize that something’s wrong. For one thing, Laura told her daughter that the storage unit number, 120, was Andy’s birthdate, but Andy was born in August. For another, she’s just found a collection of her baby pictures, including a pair that show signs of tampering — one version in which she’s sitting on her birth father’s parents’ laps, the other the exact same, but without Andy in it.

From this point onward, the novel begins alternating between two storylines: Andy’s deep dive into her mother’s past in the present day, and the drama surrounding a small cult known as the Army of the Changing World, which took place years ago. Under the stewardship of leader Nick Hart, the Army of the Changing world carries out a plot to assassinate a powerful business executive, Martin Queller, whose own children, Jane and Andrew, are cult members.

Jane Queller — Nick’s lover, pregnant with his child — has spent her entire life being physically and sexually abused by her father, which makes her more amenable to Nick’s orders. But when Nick forbids her from visiting Andrew, who is dying of AIDS, Jane finally decides to leave the Army of the Changing World. After making sure her brother will receive treatment, Jane turns herself in and enters witness protection in exchange for ratting out Nick and the rest of his army.

Back in the present, Andy’s pursuit of the truth takes her to Austin, Texas. There, she meets one of her mom’s old associates, Paula, who gives tells Andy that a woman named Clara living in Illinois might have more answers about her mother. Andy discovers that the stories about her birth father, who supposedly died in a car crash before Laura met Gordon, are all false. Her father is Nick, and her unassuming mother is actually Jane Queller: a former concert pianist who disappeared and started a new life after her father, Martin’s, death.

Shortly after Andy arrives at Clara’s house, it comes under attack. It’s Paula, who tricked Laura’s naïve daughter into leading her to her old compatriots. As it turns out, Paula has always been Nick’s most zealous devotee, and she has a plan to free him from prison. She injures Clara, kills another person, and kidnaps Andy, whom she agrees to ransom to Laura in exchange for some paperwork that could free Nick.

When Laura arrives, however, Paula threatens and beats her with a revolver. Andy manages to signal to her mother that Paula’s gun is out of bullets, at which point Laura punches a razor blade into the other woman’s throat.

One month after Paula’s death, Laura goes to see Nick while wearing a wire. She confesses to a crime of her own, revealing that she bought the gun used to kill Martin Queller. Nick, who doesn’t know that Laura already served two years in prison for her involvement in Martin’s death, believes himself to have the upper hand and confesses that he ordered the attacks on her home and Clara’s. With the evidence they need to keep Nick in prison for a long time, Laura and Andy head back home to resume their normal lives.

More like this
'The Summer I Turned Pretty' Book Ending Is An Emotional Rollercoaster
By K.W. Colyard
The 'Spiderhead' Movie Ending Is Nothing Like The Short Story It’s Based On
By Morgan Leigh Davies
'Stranger Things' Fans Are Begging For Steve To Live For The Funniest Reasons
By Grace Wehniainen
What’s New On Netflix: 'Stranger Things' & 'Mean Girls'
By Arya Roshanian
Get Even More From Bustle — Sign Up For The Newsletter