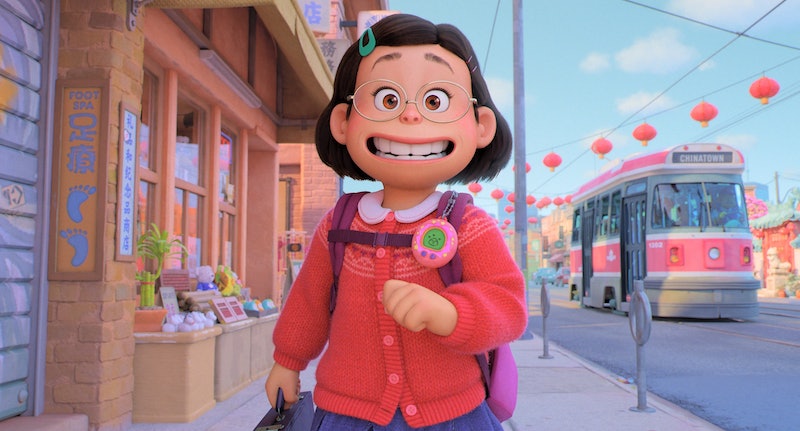 Pixar’s newest movie Turning Red landed on Disney+ earlier this month in a direct-to-streaming release, and it’s a milestone film for the animation powerhouse: It’s the first Pixar film to be directed by a woman, Domee Shi, and the second film (after 2009’s Up) to feature an Asian lead character. Plus, the film currently holds a 95% on the review aggregator website Rotten Tomatoes, indicating universal acclaim. Despite the massive fanfare, the film is currently embroiled in an online controversy that feels depressingly familiar to champions of Asian and female representation onscreen.

Meilin “Mei” Lee (voiced by newcomer Rosalie Chiang) is a 13-year-old Chinese-Canadian girl growing up in Toronto whose puberty is hitting different. While we all dealt with mood swings, acne flare-ups, and general discomfort in our bodies at that age, Mei’s coming of age is taking on a different form, literally. She turns into a giant red panda any time she feels a strong emotion. A family gene, her parents initially believe her transformation is brought on by the confusion of her first period.

The focus on Asian culture and talk of periods have colored the reactions to and discourse around the film. In a now-deleted review, CinemaBlend Managing Editor Sean O’Connell lamented that he couldn’t identify with Mei’s story, and therefore the entire project was “limited in scope.” His language specifically focused on the cultural setting, making the bizarre conclusion that a story set in Toronto’s Asian community somehow made the film too “specific and narrow” to be enjoyed by the masses. O’Connell defended his thoughts in a now-deleted tweet, which called the film “exhausting” due to his inability to see himself within the story. O’Connell and CinemaBlend’s editor in chief have since apologized for the review.

Many on Twitter were quick to jump to the film’s defense — especially in the cultural critic corner of the social network — citing classic animated movies as examples of films that did not portray realistic stories but were not met with the same scrutiny. NPR’s Linda Holmes tweeted tongue-in-cheek, “I too prefer more universally relatable heroes such as cars with eyeballs,” and the New Yorker’s Emily Nussbaum expressed her rage in line with the film: “I thought that people were probably overreacting to that Seeing Red review, but then I read it and turned into a massive bristling red panda.”

The film’s cast even reacted to the review and the surrounding controversy, doubling down on the universal message in an interview with CBC. Chiang said, “This is a coming of age film … I think different people of different cultures are going to go through it differently, but at the end of the day, the core messiness and change is something everyone can relate to.” Never Have I Ever’s Maitreyi Ramakrishnan, who voices Mei’s friend Priya, also supported that sentiment, stating that people will be able to relate to the film “regardless of whether you are a young Chinese girl from Canada or not.” (CinemaBlend and O’Connell did not directly respond to the cast’s reaction.)

In more recent days, Turning Red has been trending for an entirely different reason. Some parents have taken to social media to complain about the film’s menstruation storyline, which they’ve deemed too mature for PG audiences, even though the average person who menstruates gets their first period at age 12. Twitter users have called it “inappropriate,” and the conservative website The Federalist described the film as an “embarrassing allegory about menstruation” while also echoing O’Connell’s sentiment that the film’s topics make it limiting for wider audiences. Writer Peter Pischke takes specific care to diminish the film’s “tampon talk” as though getting your first period isn’t a real, sometimes frightening, and universal part of many coming-of-age stories.

Many on Twitter have weighed in with their happiness in seeing the storyline as well as their disbelief about the controversy. One user stated, “It’s actually insane how many people are bothered by the period talk in Turning Red because young kids will see the movie. A LOT of girls get their periods at like 8 years old. I was 10.”

Some also lauded the fact that Turning Red shows a wide array of menstrual products, demystifying pads, tampons, and other hygienic alternatives. “The way I sobbed when I saw the pads in #TurningRed. Women are so often reduced to smaller versions of themselves, either sexualized or non-existent. To see a film list out different kinds of hygiene products with such normalcy was moving,” a Twitter user said.

A Twitter user rejoices about the depiction of hygienic products in Turning Red.

More like this
The 'Hocus Pocus' Sequel Finally Has A Release Date & It Makes Total Sense
By Shannon Barbour and Radhika Menon
Everything To Know About Marvel’s 'Thor: Love And Thunder'
By Grace Wehniainen
'Obi-Wan Kenobi' Takes Place After This Key Star Wars Movie
By Arya Roshanian
Marvel's 'She-Hulk' Trailer Is Finally Here & The Hulk Lends A Big Helping Hand
By Grace Wehniainen
Get Even More From Bustle — Sign Up For The Newsletter