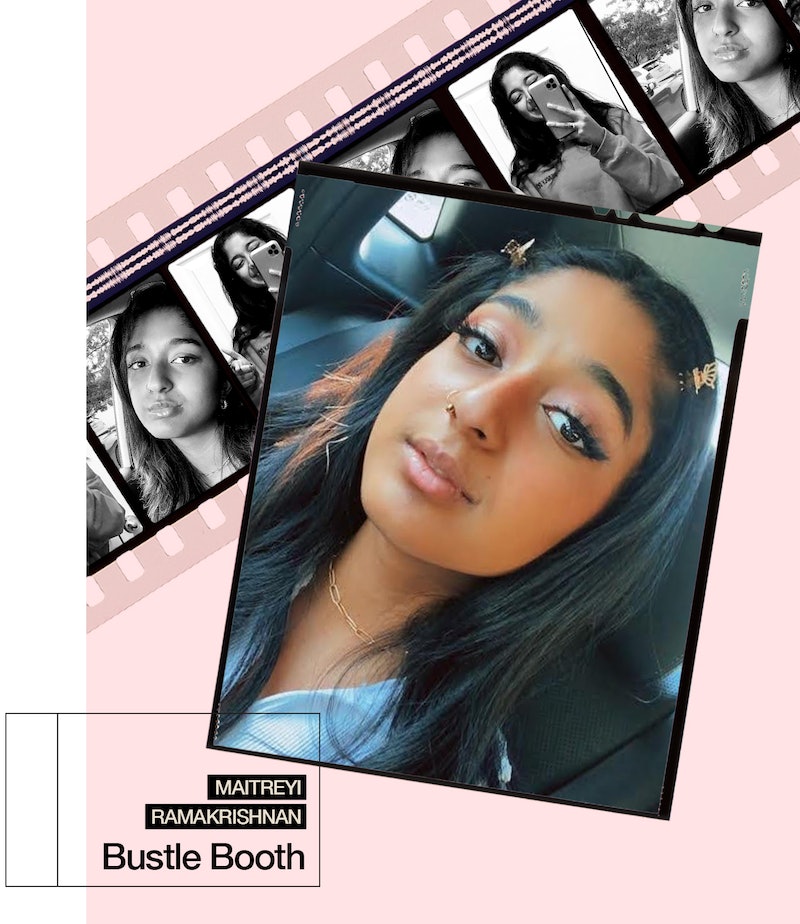 Maitreyi Ramakrishnan doesn’t consider herself a romantic. Sometimes she can be, if she’s in the right mindset and she happens to be crushing on someone. But normally? “Nah, I'm like a cynic. I'm all, #LoveIsDead2021,” the 19-year-old tells Bustle.

Ramakrishnan’s role on Never Have I Ever may convince you otherwise. She stars as Devi Vishwakumar, a lovesick South Asian teen torn between her bookish classmate Ben and high school heartthrob Paxton. She’s outspoken and ambitious, but desperate to be liked by boys. Season 2 delves deeper into what it means to love and be loved — both romantically and platonically — while Devi continues to process the grief she feels over her father’s sudden death.

Working on a show about a girl still figuring out her place in the world has been fitting for Ramakrishnan, who jokingly calls the crew her “university friends” even though they’re old enough to be her parents. The Ontario, Canada native landed the part of Devi at 17 after seeing a casting call on Twitter. She’d never acted before, but beat out 15,000 other applicants. Acting alongside seasoned performers made her anxious at first. “There was a lot of me that thought, ‘OK, you’re just a high school kid. You don’t have real experience yet,” she says. “[But] along the way I learned I'm here for a reason, and I don't want to keep doubting myself constantly. I don’t think I’m so experienced now just because I have one season under my belt, but I'm proud of myself.”

Ramakrishnan has since been named a TIME100 Next actor and appeared in Michelle Obama’s “Girl Talk” special in support of girls’ education. She sometimes has a hard time wrapping her head around her newfound fame, and the responsibility of being one of the few Asian women leading her own show. But just as Devi comes to a deeper understanding about her mental health in Never Have I Ever Season 2, Ramakrishnan is mindful about the pressure she puts on herself.

“I used to feel this huge responsibility to make sure everyone felt represented and that I was speaking to all audiences [with] Devi's character,” she says. Eventually, she realized that Devi couldn’t possibly reflect every single South Asian girl — otherwise she’d be a personality-less “blob.” Seeing Devi connect with her therapist, accept her shortcomings, and focus more on her own wellness in Season 2 helped Ramakrishnan to realize, “If I'm letting this fictional character take a break and have a chill pill, why can't I let myself?”

As her platform continues to grow, Ramakrishnan remains eager to work on the things that excite her. She’s interested in pursuing a degree in human rights and equity studies, a passion she shares often on her various social media accounts. She’s also adding to her rom-com credits by starring as Lizzie Bennet in the upcoming film The Netherfield Girls, a contemporary take on Pride and Prejudice.

“You know what's really funny? I don't watch a lot of rom-coms. But here I am, about to be the lead in two big rom-com projects,” she says. It might not be her genre of choice, but getting cast as Lizzie was another sign to Ramakrishnan that she chose the right career path. “They weren’t looking for any specific ethnicity [for Lizzie],” she adds. “I wasn't the best brown girl for the role. I was just the best girl, you know?”

Get to know more about Ramakrishnan — including the cartoon character she calls her celeb idol — in her Bustle Booth questionnaire below.

"What an idiot" — Hermione Granger in Harry Potter and the Philosopher's Stone.

“I Will Survive” by Gloria Gaynor.

The Never Have I Ever production crew.

Whatever they want to say.

More like this
Devi Is Going To Meet A “Smoldering Bad Boy” In ‘Never Have I Ever’ Season 4
By Jack Irvin and Gabrielle Bondi
On 'The Handmaid’s Tale,' Christine Ko Fights Back
By Gretchen Smail
Netflix Reveals First Look At Wednesday In The 'Addams Family' Spinoff Series
By Bustle Editors
Here’s Everything Coming To & Leaving Netflix In October
By Jake Viswanath
Get Even More From Bustle — Sign Up For The Newsletter