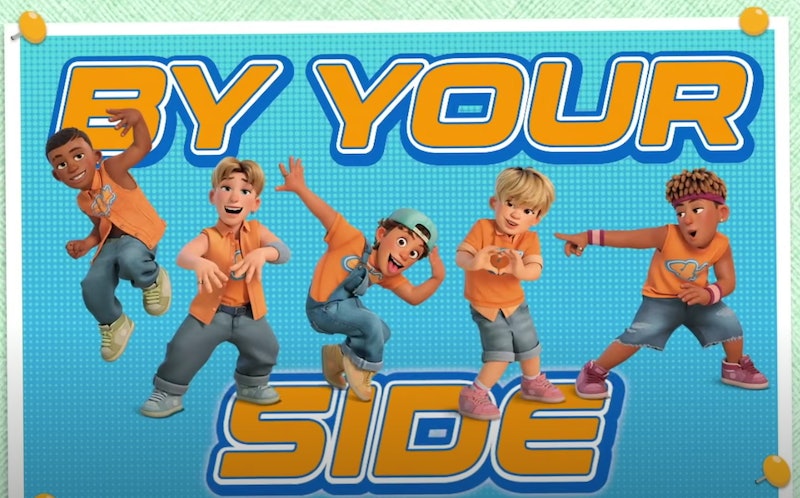 Billie Eilish and Finneas won a Grammy in 2021 for their James Bond theme, which is also in the running for Best Original Song at the forthcoming 2022 Academy Awards. With such prestigious buzz surrounding the soundtrack cut, it should come as no surprise to learn the dynamic sibling duo was tapped by Disney to craft original songs for the latest Pixar film, Turning Red.

Directed by Domee Shi, who co-wrote the film with Julia Cho, Turning Red follows 13-year-old Chinese-Canadian student Meilin “Mei” Lee on her journey to simply make it through middle school and impress her strict mother. However, such aspirations prove tough to accomplish as she endures a rare, hard-to-hide genetic condition: anytime Mei gets emotionally overwhelmed, she turns into a giant red panda.

After convincing her parents to let her live a normal life in spite of her uncontrollable transformations, Mei begins using the condition to her advantage. When her mother bars her from seeing her favorite boy band, 4*Town, in concert with friends, a panda-fied Mei raises money for tickets by hosting meet-and-greets and selling merch, and she attempts to sneak out.

The Pixar film features three songs by 4*Town, a five-member boy band voiced by real-life performers including Finneas, who wrote the tracks alongside Eilish. Here’s everything you need to know about 4*Town as well as Finneas and Eilish’s contributions to the Turning Red soundtrack.

In Turning Red, 4*Town is made up of fictional members Robaire, Jesse, Aaron Z., Aaron T., and Tae Young. When coming up with ideas for the boy band, Shi recently told Slate she was interested in giving each performer a specific personality, similar to how fans categorize the members of NSYNC, BTS, One Direction, or the Jonas Brothers. “Tae Young’s the cute one, and Aaron Z’s the sporty one. Robaire’s the one that’s going to have that solo career after the boy band dissolves,” the director said. “Jesse’s the one that’s way too old to be in the band, and he has two kids, and he probably drives them around and buys beer for them.”

Band leader Robaire is played by actor and musician Jordan Fisher, known for his work in 2020’s To All the Boys: P.S. I Still Love You and 2021’s Tick, Tick...Boom! He’s also released his own solo music, including the 2020 singles “Contact” and “Walking on the Ceiling,” and performed on Broadway in Hamilton and as the titular role in Dear Evan Hansen. In a recent interview with Yahoo!, Fisher spoke about Turning Red’s uplifting message. “It’s important to know that everyone’s fighting their own beasts,” he said. “You never know what people are going through.”

Lending his voice to the role of Aaron T. is budding singer Topher Ngo, for whom Turning Red marks his first film work to date. According to his website, Ngo’s previously performed as a singer and theater actor in Los Angeles. He also posts song covers on his YouTube channel, including a take on “My Future” by Eilish. “To see this type of representation on screen that I haven’t seen that much growing up... it really made me feel seen and heard,” Ngo told Yahoo!.

Portraying shy group member and choreographer Aaron Z. is Josh Levi, who rose to fame as recurring character Darius Merriweather on Friday Night Lights and gained musical traction in 2013 as a Season 3 finalist on the U.S. version of The X Factor. Speaking to The Wrap for a recent interview, Levi revealed he’s been friends with Finneas and Eilish for some time, and they hand-picked him for the Turning Red role. “It was really dope to reconnect and for something as special as Pixar,” the musician said. “And for them to have me in mind, it’s such a blessing and honor.”

Actor and musician Grayson Villanueva voices Tae Young, the youngest member of 4*Town who’s got a penchant for wildlife preservation. His previous onscreen appearances include a 2017 Modern Family episode as well as The CW’s 2019 Christmas Caroler Challenge. “It was definitely a process,” Villanueva told TheWrap of working on the music for Turning Red. “But by the time that we started to get to know how we all sound together, it started really feeling like magic.”

Filling out the group as oldest member Jesse is Finneas, who wrote and produced 4*Town’s original songs alongside his sister during lockdown. Finneas recently told The Hollywood Reporter, “And the director is really so talented — her name is Domee Shi. She’s incredible, and it was just a really cool process the whole time.”

Famed composer Ludwig Göransson, known for his work with Childish Gambino, Adele, HAIM, and on film soundtracks for Black Panther, Creed, and Tenet, crafted the score for Pixar’s Turning Red. “I wanted to score to represent those uncomfortable and confusing feelings that we all encounter in our journey to adulthood,” he recently told Variety. “It’s a crazy mix of musical genres, from New Jack Swing to ’90s boy-band, traditional Chinese sounds, and Western orchestra. I wanted the music to act like a mixtape for Mei.”

After Walt Disney Music president Tom MacDougall’s initial conversations with Shi about the film’s music, he reached out to Finneas and Eilish, whom he’d been listening to since 2016’s “Ocean Eyes.” What first impressed him was “the breadth of the territory that their songwriting and performing covered,” MacDougall told Variety.

Shi told Slate the sibling duo was “so on board with the idea” of writing songs for 4*Town, partially due to Eilish’s past as a young fan of boy bands and Justin Bieber. “We gave them three specific types of songs that we needed,” the director said of the creative process. “Because those scenes were already written where we needed the songs.” Ultimately, Finneas and Eilish crafted three songs for 4*Town to perform in the film: “Nobody Like U,” “1 True Love,” and “U Know What’s Up.”

“Writing the songs has literally been the most fun we’ve had writing,” Eilish recently told Disney for a Turning Red video about the fictional band. “Mei and her friends’ passion for 4*Town, it really resonated with me just because I was the same. It’s so accurate of how it feels when you’re that kind of fan.”

“Nobody Like U” is an upbeat track about friendship with romantic undertones, which could represent the band members’ relationships with their fans as well as Mei’s supportive friendships and budding crushes. “You’re never not on my mind / I’m never not by your side,” sings the fictional 4*Town members.

“1 True Love” is a dramatically lovelorn heartbreak ballad slightly reminiscent of Olivia Rodrigo’s “Drivers License” thanks to its lyrical reference to a tearful drive past an ex’s house. “I drove by your house 29 times today / And nobody else could make me feel this way,” read the song’s lyrics. “You are my one true love, my one true love / My heaven above, my one true love.”

“U Know What’s Up” acts as the band’s mega-hit song — think One Direction’s “What Makes You Beautiful” — that everyone can sing along to. “It’s that hit song, and we needed it to play during the montage when Mei and her friends are making money as a panda,” detailed Shi. “So we were like, ‘If you could include some lyrics about making money and hustling, that would be great.’ Then also, ‘If you could include a call and response section as well, so that we can play it at the concert?’”

Throughout the songwriting process, Shi provided detailed instructions for the superstar musicians, and she was more than satisfied with the results. “We were very specific with our ask, and they were amazing in that they covered our entire wishlist of things that we needed the songs to do, but still made them their own.”

More like this
Watch The Dramatic First Trailer For Netflix's Jennifer Lopez Documentary
By Alyssa Lapid
Lisa Marie Presley Reviewed Baz Luhrmann’s ‘Elvis’ Movie On Twitter
By Grace Wehniainen
Everything To Know About Marvel’s 'Thor: Love And Thunder'
By Grace Wehniainen
Kim Kardashian Reacts To Kanye West’s Diss Song “Eazy” On 'The Kardashians'
By Jake Viswanath
Get Even More From Bustle — Sign Up For The Newsletter