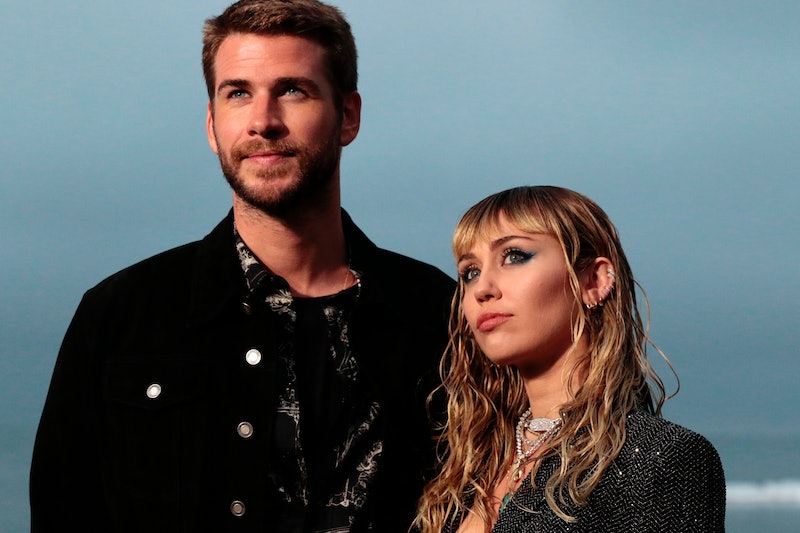 Black Friday may have to be renamed Plastic Friday for 2020 thanks to the release of the new Miley Cyrus album Plastic Hearts. Cyrus' latest effort went on sale on Nov. 27, and it didn't take long for fan reactions to the album to start pouring in. And there was one commonality to several of the album's songs that a lot of listeners seemed to agree was bubbling beneath the surface: Liam Hemsworth.

Cyrus has had a lot of high-profile relationships in her life, but none have been more significant — at least in the eyes of the media — than the one she shared with Hemsworth. The pop star and the Australian actor first began dating in 2009 and continued to see each other off and on throughout the next decade, culminating in their wedding in Dec. 2018. The marriage, however, was short-lived. The pair announced in Aug. 2019 that they had separated, with divorce proceedings kicking off that same month. By Jan. 2020, their divorce was finalized and the two were no longer married. Plastic Hearts is the first album Miley has made since the marriage and breakup (her last album, 2017's Younger Now, predates both), and fans are hearing a whole lot about her relationship with Liam in the new record's lyrics.

While tracks like "High," "Hate Me," and "Angels Like You" have received fan speculation regarding their connection to Liam, one song on the album especially has drawn the attention of inquiring minds: "WTF Do I Know?". In the track, Cyrus sings lyrics like "Maybe gettin' married just to cause a distraction." Gee, now who could that be about? Then there's the chorus, which seems to very obviously reference a breakup with you-know-who: "What the f—k do I know? I'm alone/'Cause I couldn't be somebody's hero/You want an apology? Not from me/Had to leave you in your own misery/So tell me, baby, am I wrong that I moved on?/And I, and I don't even miss you/Thought that it'd be you until I die/But I let go, what the f—k do I know?"

Fans on Twitter were quick to point out how the song's scathing lyrics were likely directed at Hemsworth. "Liam Hemsworth leaving the Thanksgiving table after he listens to WTF do I know," @mileycyrusvibez wrote alongside a Hannah Montana gif of Miley running from a room crying. While linking to the track on Spotify, Twitter user @naivemelodys wrote, "liam hemsworth hurting miley cyrus like this AND playing gale in the hunger games...pick a struggle." Also linking to the track was @angelsemtions, who tweeted, "WTF Do I Know?: LIAM HEMSWORTH COUNT YOUR MF DAYS, WE COMING FOR YOU." Other fans were less angry and instead opted to thank Hemsworth for inadvertently inspiring what they consider to be one of Cyrus' best albums.

Neither Miley Cyrus nor Liam Hemsworth has publicly commented on the apparent references to their relationship in Plastic Hearts, but with so many fans already voicing their opinion, it's doubtful that either could change the narrative at this point.