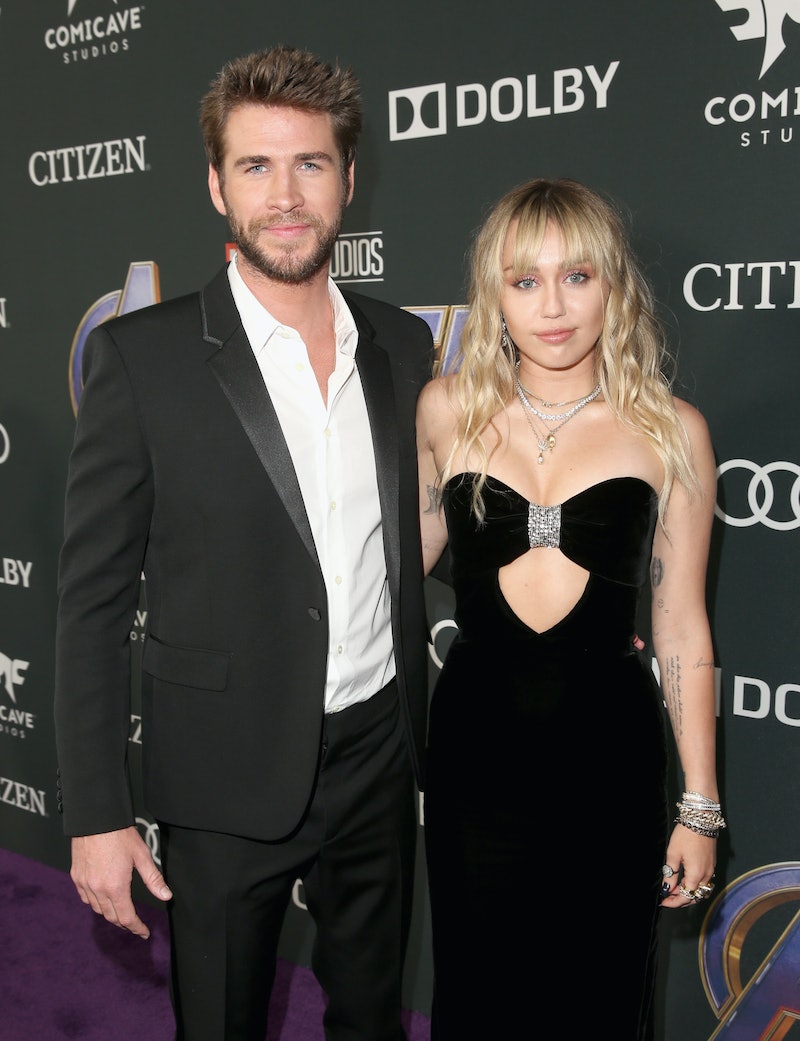 On Saturday, Aug. 10, People reported that Miley Cyrus and Liam Hemsworth have split after just eight months of marriage. Cyrus and Hemsworth released a statement to the outlet confirming their breakup and offering insight as to why they've chosen to separate. It seems that the separation is amicable, and, as Cyrus' rep told People, it's what's "best" for them both at this time. (Bustle has reached out to Cyrus and Hemsworth's representatives about their split, but did not hear back by the time of publication.)

Cyrus' rep issued a statement to People on the singer's behalf that reads, "Liam and Miley have agreed to separate at this time. Ever-evolving, changing as partners and individuals, they have decided this is what's best while they both focus on themselves and careers. They still remain dedicated parents to all of their animals they share while lovingly taking this time apart. Please respect their process and privacy."

Hemsworth and Cyrus tied the knot in December 2018, and they've dated off and on for 10 years since meeting on the set of the 2010 movie The Last Song. However, they've always been clear that their relationship doesn't fit any easy definitions, a sentiment that's echoed in their statement — it's not every day that celebrities make a point to discuss pet parenting and share that they're "lovingly" taking time apart in a separation statement.

In a July interview with Elle, Cyrus shared how her relationship with Hemsworth has always been unconventional. "I think it’s very confusing to people that I'm married," she told the publication. "But my relationship is unique. And I don't know that I would ever publicly allow people in there because it's so complex, and modern, and new that I don't think we're in a place where people would get it. I mean, do people really think that I'm at home in a f*cking apron cooking dinner?" She went on to say, "I definitely don’t fit into a stereotypical wife role. I don’t even like that word."

Her words also illustrate just how private she and Hemsworth are about their relationship. While they have shared photos from their time together and the occasional gushing tribute to one another, for the most part, they've kept the details of their relationship to themselves. That's likely to remain true now that they've split.

Currently, Cyrus is in Italy on a girls' trip with her sister Brandi Cyrus and The Hills star Kaitlynn Carter, who recently split from Brody Jenner. They've all been sharing photos and Instagram Stories from their trip, and fans were quick to notice that the "Mother's Daughter" singer doesn't appear to be wearing her wedding ring in the snaps. Despite this, Cyrus and Hemsworth have not spoken out about their breakup beyond the statement issued to People, and Hemsworth hasn't posted anything on social media since the announcement.

As sad as it is to see Cyrus and Hemsworth part, they're the only ones who truly know what's best for them, and for now, they've decided they need to spend some time apart as they focus on themselves.