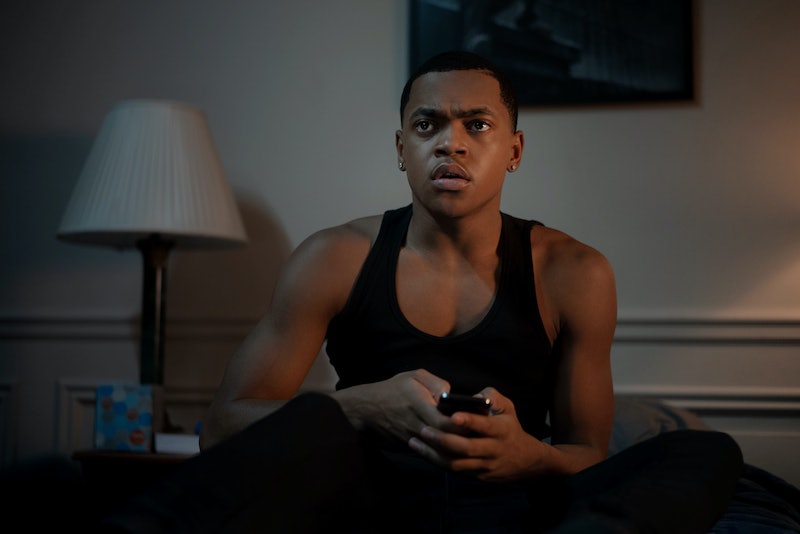 Tariq St. Patrick will go to any length to protect his family. He killed his father. He killed his best friend. And in Power Book II: Ghost’s Season 1 finale, he killed his professor Jabari — right alongside Cane Tejada, the very man who’d just plotted to murder him.

Series creator Courtney A. Kemp teases the decision is “not going to work out well” for Tariq and Cane in Ghost’s second season. “Committing a murder with your friend is one thing, but committing a murder with your enemy? Really bad idea,” she tells Bustle. “That’s obviously going to be very, very sticky for the two of them in trying to figure out who can trust each other and whether or not they’re going to get the other person roped up for it.”

Michael Rainey Jr., who plays Tariq, adds that the fallout from Jabari’s murder will affect his character in a “big, big way,” as he and Cane (Woody McClain) attempt to cover their tracks. He’ll also have to navigate an increasingly fraught relationship with the rest of the drug-dealing Tejada family, including matriarch Monet (Mary J. Blige) and his love interest Diana (LaToya Tonodeo). “His interactions with Cane, Diana, and Monet all carry much more danger this season for individual reasons,” Kemp says. “Certain other factors come into play that put pressure on those people to either betray or hurt Tariq or kind of pretend to be loyal or demand loyalty from him. So the Tejadas make his life really complicated.”

One of Tariq’s biggest challenges will be not having his mom Tasha (Naturi Naughton) — who’s now in witness protection — to call on for advice. “He doesn’t have anyone in his corner that he can turn to and ask like, ‘Yo, is this right from wrong?’” Rainey Jr. explains. “He has to make his own decisions, and he has to be ready to deal with the consequences if the decision he makes is right or wrong.”

While figuring out who he can confide in, Rainey Jr. says Tariq will “lean into making a decision” about his love rectangle with Diana, classmate Lauren Baldwin (Paige Hurd), and ex-girlfriend Effie Morales (Alix Lapri). Kemp further teases that as a “young man with a lot of options,” Tariq will “try out different scenarios, and find out which woman is the right woman” to fill Tasha’s place as his “primary connection.”

Without his mom by his side, Tariq will need to seek out allies beyond his romantic interests, too. That includes Ghost’s old Power associate Councilman Rashad Tate (Larenz Tate), who will play a significant role in Season 2. “Tariq is in the same world his father was in, so he has to reach out and use his father’s old resources,” Rainey Jr. explains.

Though Kemp notes that Rashad “never does anything for free,” she says that Tariq will reach out to him out of desperation. “Tariq needs him,” she says. “He knows where the bodies are buried.”

As the investigation into Jabari’s murder gains traction, Tariq will also have to align himself with shady attorneys Cooper Saxe (Shane Johnson) and Davis MacLean (Clifford “Method Man” Smith). Rainey Jr. says Tariq would prefer not to get involved with Saxe, but his Season 1 hookup with Jenny Sullivan (Paton Ashbrook) — aka the prosecutor on Jabari’s case — could work to his benefit. Teaming up with Davis will be just as precarious: “He’s a dirty guy, so being in cahoots with him could get a little messy.”

More like this
At 28, Rosie Perez Risked Her Career To Stop Playing Stereotypes
By Gabrielle Bondi
At 28, Debra Jo Rupp Was Living A Much Different '70s Show
By Grace Wehniainen
Zach Reveals The Chaotic 30 Minutes That Were Cut From ‘The Bachelor’ Premiere
By Grace Wehniainen
'That '90s Show' Star Callie Haverda Got Advice From Mila Kunis & Ashton Kutcher
By Brad Witter
Get Even More From Bustle — Sign Up For The Newsletter
From hair trends to relationship advice, our daily newsletter has everything you need to sound like a person who’s on TikTok, even if you aren’t.