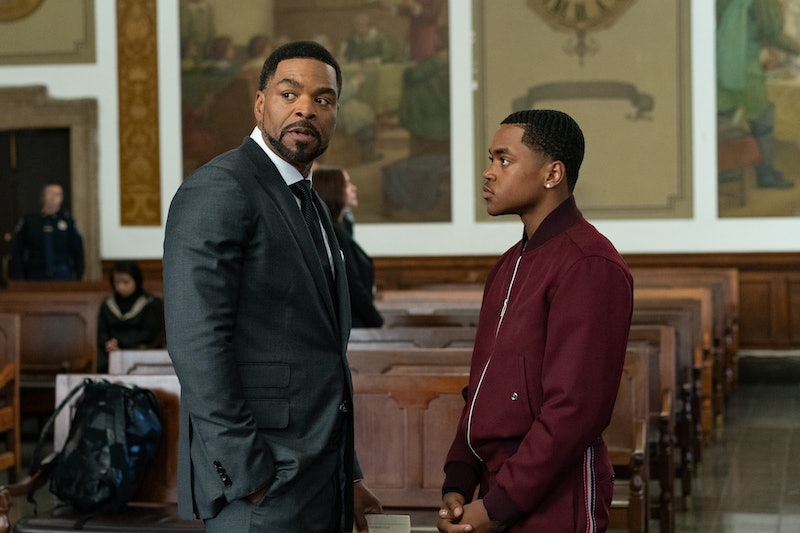 Omari Hardwick's Ghost may be dead, but plenty of familiar faces from Starz's Power live on in the Power Book II: Ghost cast. Following the aftermath of Tariq St. Patrick (Michael Rainey Jr.) murdering his father — and his mother Tasha (Naturi Naughton) taking the blame for him, both actors are joined in the spinoff by fellow alums, including Shane Johnson (Cooper Saxe). There are plenty of newcomers too, including powerhouse Grammy winners Mary J. Blige and Clifford "Method Man" Smith.

Referencing Method Man's 1994 track, "Bring the Pain," Power executive producer 50 Cent revealed on XXL's Hip-Hop Moments of Clarity podcast that he "was begging" and "had to work to get" the Wu-Tang Clan member to join Power Book II. "The difference with Mary [J. Blige] and Meth is that these are my stars," he said on the podcast before breaking into song. "People who are stars when I'm just in the neighborhood looking at the TV. Like I said, it's a different thing when you're on the bus saying, 'I came to bring the pain, it's hardcore from the brain...'"

If your favorite Power characters aren't in this spinoff, however, there are still three more (and counting) in the works. "We are patterning it after Marvel, where different characters come in and out of other people's shows,” creator Courtney Kemp told Entertainment Weekly after the Power series finale. "So there’s crossovers and some of your favorite characters will come back, even if they don’t get their own spinoff, they will show up in places. We’re trying to really do it for the fans, to give them most of what they want."

Get to know more about those who will be in Power Book II below.

The 19-year-old Orange Is the New Black alum is continuing the role he's played in since 2014. In Power Book II, Tariq is a freshman at Stansfield University, but with his mom in jail for a murder he committed, he's torn between college life and starting his own branch of the family business to pay for Tasha's legal representation.

Also a six-season Power vet, the Notorious actor returns as fierce and fashionable Tasha, who's now imprisoned for murdering Ghost — though she's innocent of the crime. Faced with proving her innocence while also protecting Tariq, she racks up legal fees that send her son down a path she'd worked to help him avoid.

The Grammy-winning and Oscar-nominated Power newcomer stars as street-smart and ruthless Monet, who heads up her illicit family business now that her husband is in jail for murder. Despite keeping her territory stable and profitable, she must adapt to maintain order when her once-smoothly running system begins to crumble.

Johnson, whose film credits date back to 1998's Saving Private Ryan, reprises his role as the last man standing in the Eastern District, now the U.S. Attorney. However, his new ambitions drag him back into the St. Patrick's world once again.

Charismatic, goofy, and loyal Brayden reunites with his former roommate Tariq at Stansfield, eager to restart their high school drug business. Paolo has made guest appearances Freeform's The Fosters and Hulu's Chance, and most recently starred alongside Octavia Spencer in the psychological thriller Ma.

After being fired from the U.S. Attorney’s office, Tameika takes on the role of Tasha's high-powered defense attorney whose quest for the truth is made more difficult by her client's attempts to hide it from her. The stage actor's standout film roles include 2008's Rachel Getting Married and 2016's Manchester by the Sea.

The alum of HBO's The Deuce and USA's Suits plays Zeke, whose NBA aspirations cause him to lose academic focus at Stansfield. Relying on Tariq to tutor him to stay off academic probation, he also introduces his pal to his Aunt Monet (Blige) and the Tejada family, which unbeknownst to him, puts his future in jeopardy.

Lauren is an overachieving Stansfield student played by Hurd, who's known for Everybody Hates Chris and The Oval. Her character eventually strikes up an unexpected romance with Tariq, who challenges her in the classroom. Their new relationship stands to throw her off her mission to get straight A's at Stansfield, however.

The Grammy-winning Wu-Tang Clan hitmaker stars as a sharp, ethically challenged defense attorney with a few secrets of his own. Davis' addiction to winning ends up being all he cares about within the St. Patrick's world of drugs and murder.

Best known as Zoe from This Is Us, Liburd plays Tariq's accomplished, empathetic professor and advisor at Stansfield. After getting her ex-boyfriend Jabari a job at the university, their tumultuous relationship "sends Carrie spiraling deeper into her sex and love addiction, revealing her penchant for vulnerable Black men and troubling her role as the minority student advisor," per Starz's character description.

The one-time rising literary star accepts a position at Stansfield as a professor in the exclusive Canonical Studies program after his most recent novel bombs, reuniting him with ex-girlfriend Carrie. Jabari, who's played by the alum of Fox's Star, attempts to act as a father figure to a disinterested Tariq.

Artist by day and up-and-coming drug lord by night, Dru has no desire to be part of the Tejada family business. After meeting Tariq and getting involved with a member of Zeke's basketball team, his strengthened quest for independence could yield deadly consequences for his loved ones. Power Book II is Lovell's first series regular role in a US series, though he previously starred in Canadian series including CBC's The Coroner and Netflix's Guilty Party.

Tonodeo has had roles in The Oath, The Fosters, and The Perfect Match, and now she's taking a turn as the intelligent princess of the Tejada family. Despite Monet grooming her to be "next in line" to the throne, Diana unexpectedly falls for Tariq, causing her to question her ambitions within the family business.

More like this
Hilary Duff's Husband Matthew Koma Has Her Name Tattooed On His Butt
By Jake Viswanath and Stephanie Downs
Linda Ronstadt’s “Long Long Time” Plays A Pivotal Role In The Last Of Us
By Brad Witter
This 'Emily In Paris' x Blackpink Crossover Is Beyond Iconic
By El Hunt
The 12 Most Controversial & Unexpected Grammy Moments Ever
By Jake Viswanath
Get Even More From Bustle — Sign Up For The Newsletter
From hair trends to relationship advice, our daily newsletter has everything you need to sound like a person who’s on TikTok, even if you aren’t.