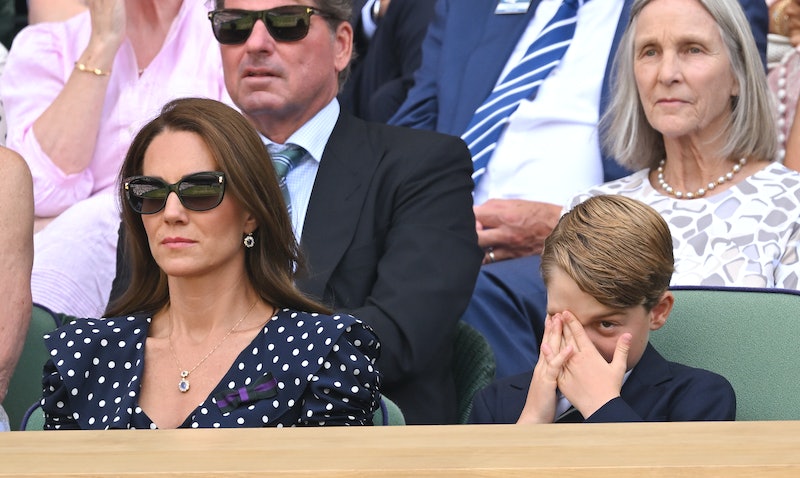 The Duke and Duchess of Cambridge attended the Men’s final match at Wimbledon on Sunday Jul. 10, bringing along their eldest son Prince George to the Royal Box for his first time at the tournament.

Judging from his enthusiastic attendance at the UEFA Euros, the young Prince is very much a fan of sporting events, and seemed to be equally delighted by Wimbledon. According to the Mirror, the Cambridges had taken George as a treat to their son.

But the cherry on the cake for the young Prince was evidently getting to meet Novak Djokovic after his win against Nick Kyrgios. When the royals congratulated Djokovic inside the All England Club, Prince George got the chance to shake the talented sportsman’s hand and was also briefly handed the pineapple-topped trophy to hold.

As a budding tennis player himself, the eight-year-old Prince must have been rather overwhelmed by meeting the seven-time champion. In a clip from the BBC’s coverage shared by Hello!, he could be seen moving away to a nearby sofa right after the encounter with Djokovic, looking visibly awestruck with his hands clasped over his face.

Prince George’s formal attire on the day — a full navy suit with a striped tie — with temperatures almost reaching 30 degrees Celsius may have been rather frowned upon by social media users concerned that the young royal would overheat, but nevertheless, he seems to have survived the three-plus-hour event unscathed, and had a smashing time to boot.

Let’s hope Prince George gets to attend more sporting events soon, and provide us with more cute reactions like this one.

More like this
Prince Harry & Meghan Markle Are Puppets Now
By Sam Ramsden
Gillian Anderson's New Netflix Drama Is *Nothing* Like 'Sex Education'
By Frances Stewart
Princess Diana’s Brother Shared A New Photo Connected To Her Childhood
By Darshita Goyal
Helena Bonham Carter Doesn't Think 'The Crown' “Should Carry On"
By Sam Ramsden
Get The Very Best Of Bustle/UK
Sign up for Bustle UK's twice-weekly newsletter, featuring the latest must-watch TV, moving personal stories, and expert advice on the hottest viral buys.