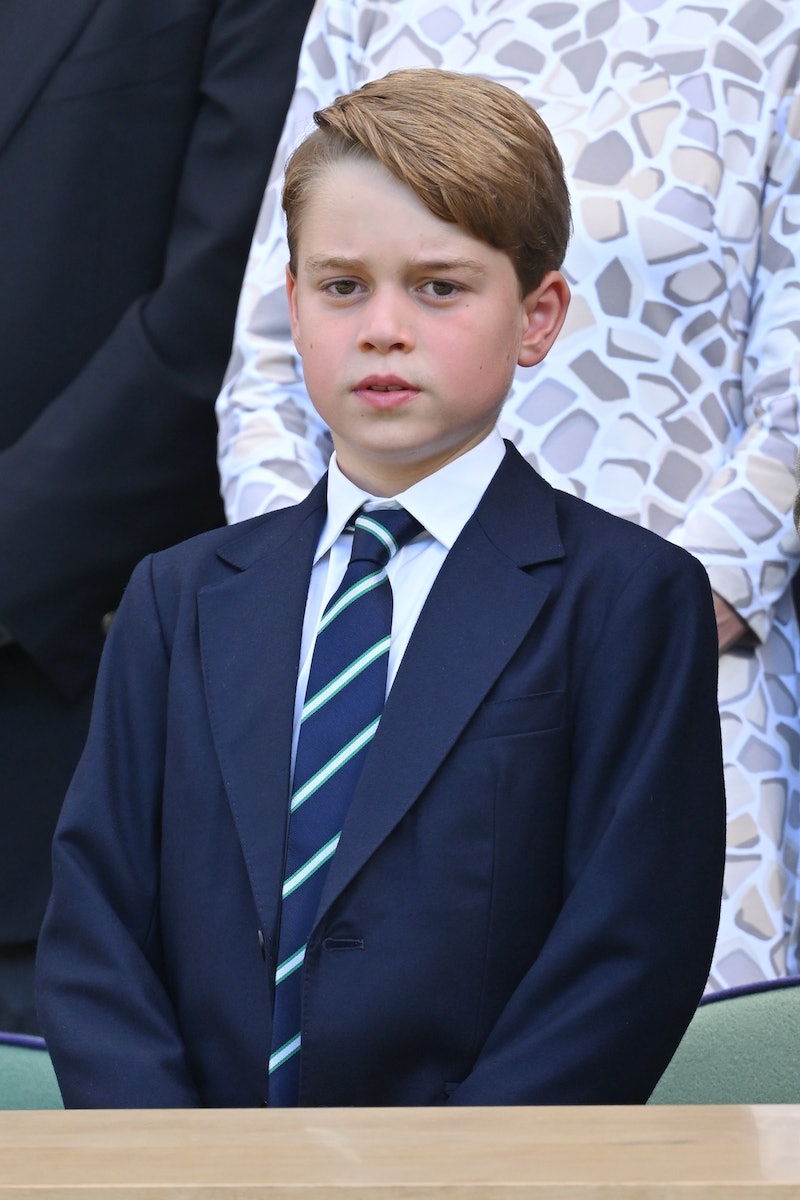 When it comes to royal fashion, it’s usually Kate, the Duchess of Cambridge, or even her daughter, Princess Charlotte, making headlines and sparking conversation. Her oldest son, Prince George, on the other hand? Not so much. However, during this year’s Wimbledon, Twitter lit up with people’s thoughts on the 8-year-old’s attire.

George made his debut appearance at the iconic tennis tournament on Sunday, July 10, joining his mom and dad in the royal box at the All England Lawn Tennis and Croquet Club to watch the men’s final between defending champion Novak Djokovic of Serbia and Australia’s Nick Kyrgios, who’s currently the world No. 40. It was “George’s treat,” according to Kate, and he was supporting Djokovic, Prince William said, per The Mirror. That all seemed normal enough, but what surprised many people was that George was clad in a full navy suit and a tie on a day with temperatures topping 80 degrees Fahrenheit (27 degrees Celsius).

Now, to be fair, there is very specific royal box protocol: “Dress is smart, suits/jacket and tie, etc.,” the Wimbledon website explains. “Ladies are asked not to wear hats, as they tend to obscure the vision of those seated behind them.” Still, many concerned viewers felt it was just too hot for a child to be sitting out in sun for hours in a suit regardless, and they didn’t hold back on Twitter.

It can’t be said enough how much the day’s high temperature bothered people. Even one fan who described George’s outfit as a “cute little suit” wondered if he was “overheating.” Another worried viewer suggested, “At least let him take the jacket off ffs.”

People had a lot of ideas about what George should be wearing instead, but they weren’t exactly royal box protocol-approved. Most wanted him in a T-shirt and suggested various age-appropriate themes, such as Minions or Spider-Man. Others thought he could “dress smart” and be more comfortable at the same time. “Couldn’t they have let him wear a polo shirt or something?” one person tweeted, in part.

Hot as it was, George did survive the three-plus-hour match. After Djokovic won and received the championship trophy from none other than Kate, the tennis star met briefly with the three Cambridges inside the All England Club, where they hopefully were able to enjoy some much-needed air-conditioning. George had a chance to speak with the now-seven-time Wimbledon champion — and Djokovic even let him hold the famed pineapple-topped trophy.

“The level of tennis, the way you played was amazing and for George to see,” Kate told Djokovic, per Express. “It was his first time here. He’s 8.” The duchess also shared that all three of the Cambridge kids play tennis, so maybe George will be raring to come back next year, no matter how warm the weather.

More like this
Meghan Markle’s Outfit Paid Tribute To The Queen In More Than One Way
By Shahed Ezaydi
The Prince William & Rose Hanbury Rumours, Explained
By Frances Stewart and Sam Ramsden
The Royals Must Follow Strict Fashion Etiquette For The Queen’s Funeral
By Darshita Goyal
8 Photos Of Prince George & Princess Charlotte At Queen Elizabeth II's Funeral
By Jake Viswanath
Get Even More From Bustle — Sign Up For The Newsletter