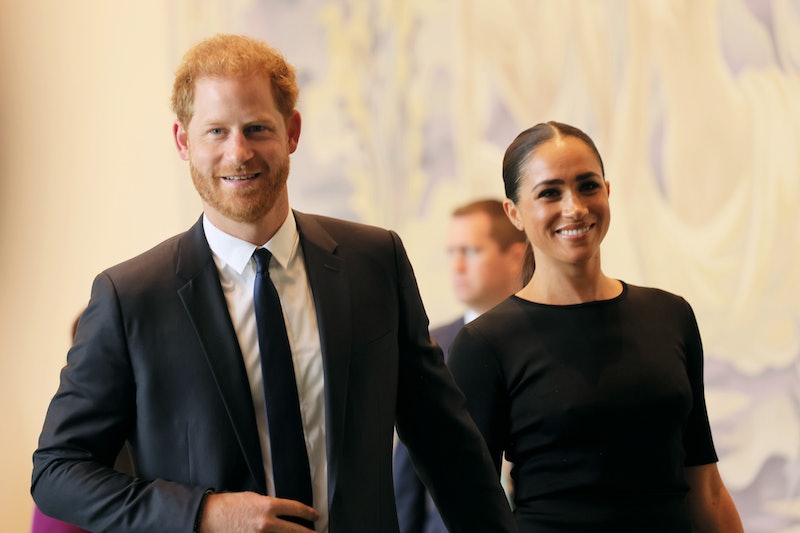 In early 2020, it came as a shock to royal spectators everywhere when Prince Harry and Meghan Markle announced plans to step away from royal duties. Since then, the Duke and Duchess of Sussex have begun a new life in California, and have only returned to the United Kingdom on a few occasions. Including the funeral of Prince Philip in 2021 and the Queen’s Platinum Jubilee in June 2022. Now, Harry and Meghan are set to return to the UK for a rare visit, and all in the name of charity.

As per Metro, the couple is scheduled to arrive in the UK on Sept. 5 to attend the One Young World Summit in Manchester. The organisation, of which Harry is a counsellor, aims to support and bring together young leaders from around the world. The following day, on Sept. 6, the Duke and Duchess will then travel to Germany for an appearance at the Invictus Games Dusseldorf 2023 One Year to Go event, before heading back to the UK to attend the WellChild Awards on Sept. 8.

“Prince Harry and Meghan, the Duke and Duchess of Sussex are delighted to visit with several charities close to their hearts in early September,” a spokesperson for the couple said of their forthcoming trip.

Any details of a potential reunion with senior members of the royal family have not been disclosed. In July 2022, however, it was reported that the Queen had invited Harry and Markle to her Balmoral estate in Scotland during her annual summer break.

Speaking to The Sun, a royal source claimed that Balmoral staff “have been told to expect the full list of royals including Harry, Meghan, and their children Archie and Lilibet.”

The source added, “they are preparing for the Sussexes,” although they would “be stunned” if the Duke and Duchess of Sussex actually turned up.

More like this
Prince Harry Will Be Able To Wear His Military Uniform After All
By Darshita Goyal and Sam Ramsden
Oprah Winfrey Revealed Her Hopes For Prince Harry & The Royal Family
By Maxine Harrison
Kate & Meghan’s Outfits Paid Tribute To The Queen In The Most Poignant Way
By Sophie McEvoy
10 Photos Of William, Harry, & Their Cousins Honoring The Queen Together
By Stephanie Topacio Long
Get The Very Best Of Bustle/UK