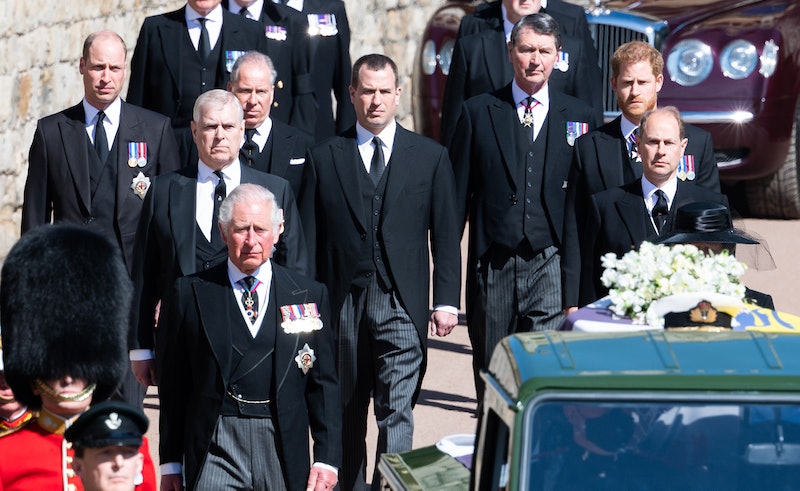 The royal family gathered on Saturday, April 17 to lay the Duke of Edinburgh to rest and honor his life. Photos from Prince Philip’s funeral captured the poignant occasion, which was a scaled-back affair, in part because of the ongoing COVID-19 pandemic and in part due to the late royal consort’s own wishes. Still, the 99-year-old’s loved ones were out in full force, with his wife, Queen Elizabeth II, and their children and grandchildren among the attendees. Of course, many eyes were on Princes William and Harry in light of their ongoing rift, but as the images show, the family was joined together in grief and mourning.

As the queen’s consort, Prince Philip was entitled to a state funeral, but he opted to have a ceremonial royal funeral. The event was planned with the Duke of Edinburgh’s “own personal wishes” taken into account, per the royal family’s official announcement, and it included a procession from Windsor Castle’s State Entrance to St. George’s Chapel. Images from that procession were particularly moving, as they showed his children, Prince Charles, Princess Anne, Prince Andrew, and Prince Edward, as well as other family members walking behind his coffin. The mourners remained stoic, but it was clear it was a difficult day for them all.

Prince Charles and Princess Anne led the royal family members in the procession, including Prince William and Prince Harry.

After the coffin was carried up St. George’s Chapel’s West Steps, there was a National Minute of Silence in the United Kingdom.

Prince Harry attended without his wife, Meghan, the Duchess of Sussex, as she is pregnant with their second child and was advised by her doctor not to travel.

The late duke’s coffin was carried by military members to honor his special relationship to the British Armed Forces.

The service was only attended by 30 mourners due to COVID-19 restrictions, per the BBC.

The image of the queen mourning her husband was heartbreaking, as many shared in tweets about Prince Philip’s funeral.

Members of the royal family were spaced throughout the chapel.

While the royal family gathered inside Windsor Castle’s grounds, members of the public gathered outside in their own tribute to the Duke of Edinburgh.

The service culminated in the Duke of Edinburgh’s coffin being lowered into the Royal Vault, followed by a blessing from the Archbishop of Canterbury and a performance of the national anthem by the choir. Over the coming days, the royals will remain in a state of mourning, joined by many people around the world.

More like this
Here’s Why Tyler Perry Helped Prince Harry & Meghan Markle When They Moved
By Marina Watts
Prince Harry Incorrectly Recites Christina Aguilera’s “Genie In A Bottle” Lyrics
By Jake Viswanath
Princess Diana’s Brother Shared A New Photo Connected To Her Childhood
By Darshita Goyal
Helena Bonham Carter Doesn't Think 'The Crown' “Should Carry On"
By Sam Ramsden
Get Even More From Bustle — Sign Up For The Newsletter
From hair trends to relationship advice, our daily newsletter has everything you need to sound like a person who’s on TikTok, even if you aren’t.