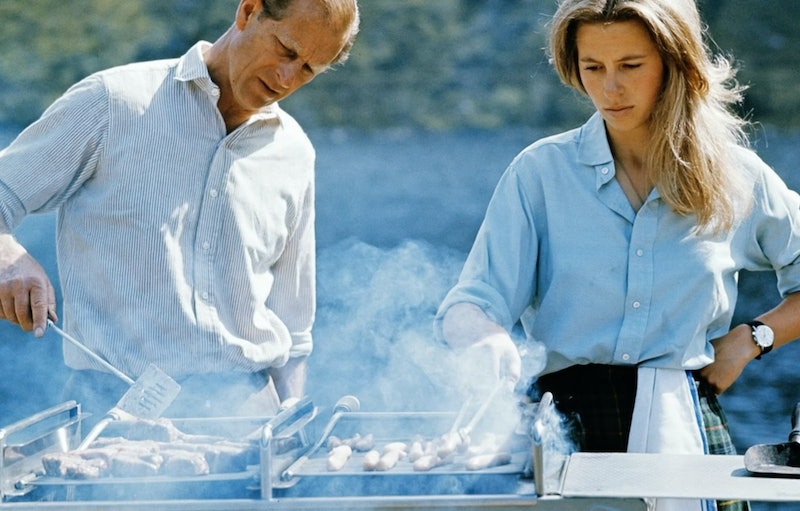 During the third season of The Crown, viewers were treated to the sight of Prince Philip and his daughter Princess Anne bonding over a barbecue. And it turns out this moment wasn’t far from the truth, as BBC One’s new documentary has revealed. Prince Philip: The Royal Family Remembers, which aired last night (Sept. 23), highlighted that barbecuing was a favourite pastime of the Duke of Edinburgh, showing many clips of the prince behind the grill.

As noted by Anne during The Royal Family Remembers, barbecues were a big part of her childhood — and she was often by her father’s side setting up the wood to burn or cooking the steaks and sausages. These meals were always a family affair, with no chef in sight.

William confirmed this, saying, “Every barbecue I’ve ever been on, the Duke of Edinburgh has been there cooking. There’s no chef, there’s no anyone else. He’d be the first person to say, when he got started off, he hadn’t got a clue what he was doing.”

He added: “But such is the way that he is that he tackles new challenge and, you know, grapples it and learns as he does it. And he’s mastered it.”

The prince also made it clear that “there’s never been a case of food poisoning in the family that’s attributed to the Duke of Edinburgh.”

What can be attributed to Philip, however, are the stains of mustard in every place the royal family have had a barbecue — whether outdoors or indoors. As William explained, when Philip’s grandchildren were younger he would take the lid of a mustard bottle and get them to clasp their hands around it.

Zara Phillips said her grandfather would say something she can’t quite remember before slamming their hands onto the tube so it would squirt everywhere. Peter Philips remarked that there are still stains on the ceilings of wherever they’ve had lunch indoors. “He used to get in a lot of trouble with my grandmother [for that],” William recalled.

Philip may have become a “brilliant barbecue cook” over the years, but he was ever the improviser. “It’s mainly experimental. I don’t think there are many recipes involved,” Timothy Laurence explained, and Prince Charles agreed. “He adored barbecuing, and he turned that into an interesting art form.” Charles went on to reminisce on his many attempts at mastering his father’s art, but he could “never get the fire to light or something ghastly” and would be met with a stern “Go away!” from Philip.

There were probably a dozen or so recipes that Philip took advice from, as a tour of his library and study revealed that he had a shelf dedicated to cooking and recipe books. “Cooking is something that I love talking to him about,” Sophie, Countess of Wessex said before revealing Philip’s love for a certain cooking duo. “He loves watching cookery programmes. Hairy Bikers, I think, is one of his favourites.”

I’m sure the Geordie duo are very happy to count the Duke of Edinburgh as one of their millions of fans.