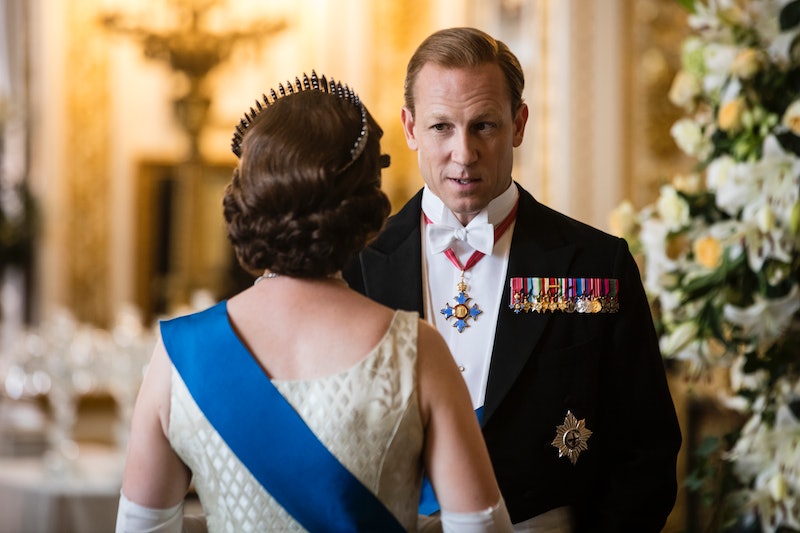 As The Crown moves into its fifth and sixth seasons, depicting the Queen’s reign during the ’90s and ’00s, there’s been plenty of talk surrounding casting. After depicting the late Prince Phillip the last two seasons of the acclaimed royal drama, Tobias Menzies will now be handing over to Jonathan Pryce and has wished the younger actor good luck in taking on the role.

As Bustle reported last year, Oscar-nominated actor Jonathan Pryce was confirmed to have been selected to portray Prince Philip back in November 2020, a role previously played by both Menzies and Matt Smith in the hit series.

Menzies, who depicted the famed royal during his younger years in seasons three and hour of The Crown, wished his successor luck, telling the Radio Times, that he’s sure Pryce will be “brilliant.”

“He’s a Knight of the Realm now – far be it from me to give him any advice. I’m sure he’ll be brilliant,” said Menzies, per Radio Times.

It’s not the first time the acclaimed actors have crossed paths. The two actor both starred in Game Of Thrones, with Menzies as Edmure Tully and Pryce as High Sparrow.

“I mean, I can only hope that – I hope he is going to get as much out of playing him as I did. I went on a real kind of journey if I’m honest,” said Menzies.

“I hadn’t really thought about [Prince Philip] very much at all before coming to this to the show and playing him, and yeah, I was – the twists and turns really surprised and confounded, and he’s a much more unexpected and surprising person [than I realised],” he added.

“I just hope [Pryce] sort of, yeah, goes on the journey with it. I wish him luck with the voice. I’m sure he’ll do something very interesting with him,” he added.

Earlier this year, Menzies reflected on his portrayal of the Duke of Edinburgh, who passed away aged 99 on April 9, 2021, and admitted to“ducking it” when it came to the late Duke’s racist comments.

“My job is to try and empathise with why he might say some of those remarks, rather than to critique them,” Menzies told the Guardian podcast earlier this year.

Meanwhile, Pryce is expected to go own journey when depicting the Duke of Edinburgh and it will certainly be interesting to see how the actor tackle’s Prince Phillips unique qualities, and yes, the royal’s distinctive voice.

The acclaimed actor will be joining Imelda Staunton and Lesley Manville in the fifth series, with Staunton taking over Olivia Coleman's role as Her Majesty in the next instalment and Manville taking over the role of Princess Margaret from Helena Bonham Carter.