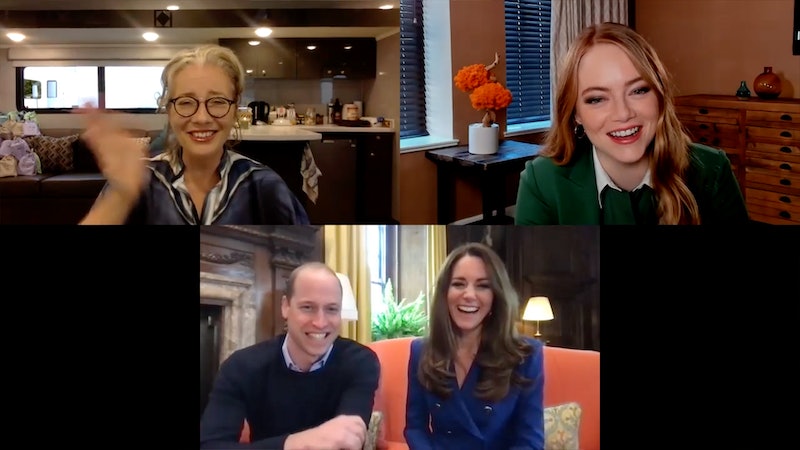 Whilst on their current tour of Scotland, the Duke and Duchess of Cambridge hosted a special drive-in screening of the upcoming Disney film, Cruella, as a thank you for NHS staff at the Palace of Holyroodhouse in Edinburgh on Wednesday (May 27), giving the key workers an opportunity to see the movie ahead of its UK release. The Cambridges got a chance to speak to the stars of the Cruella, Emma Stone and Emma Thompson, about their new movie prior to the event, and of course, Emma Thompson, in true Emma Thompson style, was an absolute babe.

“Nice to see you, Darling,” Thompson told Prince William without skipping a beat at the beginning of the call, which took place on May 24. Thompson plays Baroness von Hellman, the head of a fashion house, in the upcoming origin story for the 101 Dalmatians villain, Cruella, played by Stone.

The royal couple thanked the two Emmas for letting them share Cruella with NHS staff ahead of the film's premiere and went on to discuss the importance of the NHS, recognising the inimitable hard work of key workers over the pandemic. “Oh my goodness,” Thompson gushed, “what an extraordinary testament to the creation of the NHS, we’re so lucky to have that!”

The group – which ended up seeming like a Zoom call between old friends – continued to discuss Cruella’s costumes, and filming in London. “Wait until you see the clooooothes! You’re going to want all of Em’s clothes.” Thompson expressed with such excitement, before singing the costume designer Jenny Beavan’s praises.

“Of course, I was alive in the Seventies,” Thompson continued. “So I kept looking at all the frocks and thinking, ‘I think that's mine. I'm sure I've worn that,’” she said, adding: “You won't remember because you're all too young.”

The pair went on to describe how much fun they had whilst filming in London, with Stone recounting how she was “in front of Buckingham Palace at one point. I was riding a motorcycle around the mall.”

“We should have had you stopped, Emma. It's very dangerous,” Prince William joked.

In true Thompson fashion, even a little London traffic didn’t stop her from getting to set on time. Leaving Stone “bundled up in the car”, Thompson explained how she got the tube in full costume with her hair piled high and her eyelashes “looking like llamas”, but “no one took the slightest bit of notice”. Thompson added, “they all clearly thought I was a drag act on the way home!”

“Hugging, can we just talk about hugging?” Thompson also asked (what I would give for a hug from Emma Thompson), which prompted Prince William to tell the stars about his meeting with a 96-year-old, Betty, who propositioned William to kiss her on the cheek when he visited the care home where she lived. “Is this what happens when I'm not around?” the Duchess joked.

And with a kiss blown at the camera, Thompson bid adieu to her co-star and the Cambridges in the nicest Zoom goodbye I think I’ve ever seen. “Bye-bye Darlings,” she waved, “bye-bye.”

More like this
Yes, You Can Stream ‘To Leslie’ In The UK Now
By Sam Ramsden
Princess Diana’s Brother Shared A New Photo Connected To Her Childhood
By Darshita Goyal
Helena Bonham Carter Doesn't Think 'The Crown' “Should Carry On"
By Sam Ramsden
The Spice Girls Are Set To Reunite At King Charles III’s Coronation
By Sam Ramsden
Get The Very Best Of Bustle/UK
Sign up for Bustle UK's twice-weekly newsletter, featuring the latest must-watch TV, moving personal stories, and expert advice on the hottest viral buys.