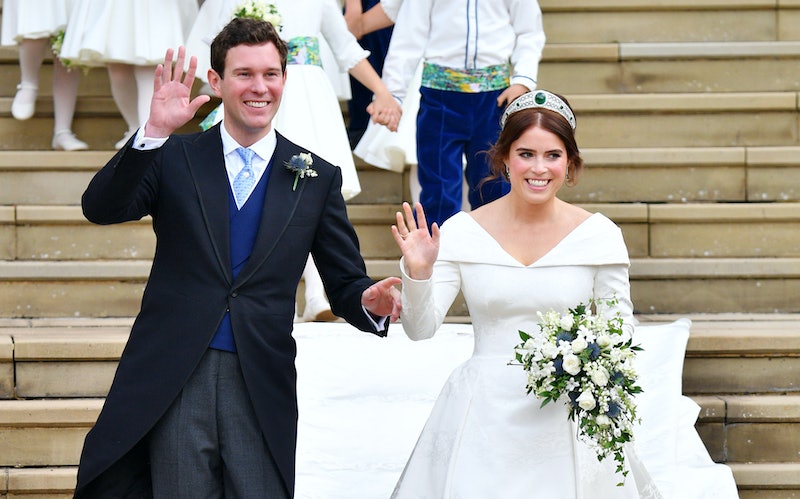 Congratulations are in order for Princess Eugenie, as she is expecting her first child with husband Jack Brooksbank, Buckingham Palace has announced.

The news came via Twitter on the morning on Sept. 27, when the official royal family account wrote: "Her Royal Highness Princess Eugenie and Mr Jack Brooksbank are very pleased to announce that they are expecting a baby in early 2021. The Duke of York and Sarah, Duchess of York, Mr and Mrs George Brooksbank, The Queen and The Duke of Edinburgh are delighted with the news."

Eugenie, who is tenth in line to the throne, also took to her own Instagram to post an adorable image of a pair of teddy bear slippers to personally announce the news to her followers. Alongside the sweet picture, in which you can see her padparadscha sapphire engagement ring, she posted a happy picture of herself and Jack with the caption: "Jack and I are so excited for early 2021...."

This morning's announcement comes a few days after Eugenie was spotted in London with her sister Beatrice, who married finacé Edoardo Mapelli Mozzi in an intimate ceremony at All Saints Chapel in Windsor Park earlier this year. The sisters went for an evening at the private member's club Annabel's on Sept. 22 and were later joined by Brooksbank.

Along with Beatrice's wedding, Eugenie's pregnancy is some happy news in what has otherwise been a controversial year for the York family, with Prince Andrew having to step down from his royal duties as a result of his links to the deceased financier and convicted sex offender Jeffrey Epstein. A woman named Virginia Roberts Giuffre has alleged that she was forced to have sex with Andrew three times in 2001 at Epstein's properties when she was only 17 years old, and other sexual assault allegations against the royal have emerged also. Prince Andrew has denied the allegations and has said he regrets his relationship with Epstein.

More like this
Meghan & Harry Respond To Jeremy Clarkson’s "Apology" Over *That* Column
By Sophie McEvoy
The Spice Girls Are Set To Reunite At King Charles III’s Coronation
By Sam Ramsden
Helena Bonham Carter Doesn't Think 'The Crown' “Should Carry On"
By Sam Ramsden
Kim Kardashian Buys Princess Diana’s Attallah Cross Necklace For $197,453
By Marina Watts
Get Even More From Bustle — Sign Up For The Newsletter
From hair trends to relationship advice, our daily newsletter has everything you need to sound like a person who’s on TikTok, even if you aren’t.