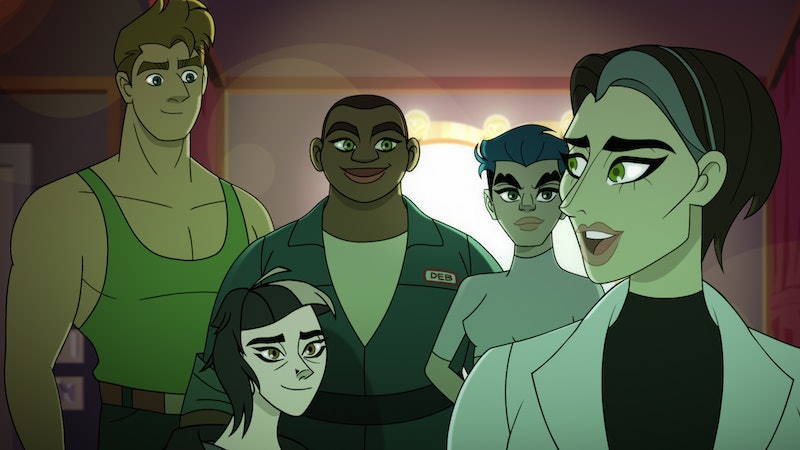 The producers behind Parks & Recreation, PEN15, and The Good Place have teamed up for a new adult animated series: Netflix’s Q-Force. Starring Will & Grace alum Sean Hayes, the show follows a top agent at the American Intelligence Agency (AIA) named Steve Maryweather, aka Agent Mary. When he comes out as gay, his homophobic boss is unable to fire him, so he sends him off to West Hollywood hoping he’ll fade into obscurity. Instead, Mary assembles a squad of fellow queer geniuses — expert mechanic Deb (Wanda Sykes), master of drag and disguise Twink (Matt Rogers), and hacker Stat (Patti Harrison) — to create the spy team Q-Force. After they solve a case, they’re begrudgingly acknowledged by the AIA, but their promotion to active agents comes with a major caveat: they have to work with Rick Buck (David Harbour), Mary’s old rival who’s straight.

“Q-Force is kind of like an underdog version of gay James Bond,” producer and showrunner Gabe Liedman told NBC News. “What if you are James Bond, but no one takes you seriously, because you’re different?”

The show features a predominantly queer voice cast, writers’ room, and animators’ room, and Liedman added that the characters are all based on his own circle of friends. “Agent Mary is, in a lot of ways, based on me, which is embarrassing to say,” he said. “Deb is based on one of my absolute best friends who’s a lesbian and who’s kind of the love and stability in my life; Stat is based on another friend of mine who actually wrote for the show, who’s a trans, goth, hilarious person. Twink is based on, like, a thousand people.”

Though Liedman describes the project as an “affirming, loving, and funny” letter to the LGBTQ+ community, the show was criticized in June when Netflix released the first trailer, which appeared to reinforce LGBTQ+ stereotypes. The backlash went viral, so whether or not Q-Force will be renewed for Season 2 depends on whether or not people decide to look beyond the initial controversy and watch it in full. Here’s what we know so far.

Netflix shows typically take about a year to produce, so if Q-Force is renewed, a new season would likely debut in fall 2022.

While some critics were “intrigued by the premise” of Q-Force when the trailer dropped, people on Twitter immediately criticized the show for leaning into problematic tropes. “Is it too much to ask to not be reduced to stereotypes?” one person tweeted, while another called the show “homophobic” and akin to a “slur.” In the trailer, Twink responds to a call with, “Oh, hey, girl! That’s my job-daddy,” in an effeminate voice, and in another scene he makes a butthole joke to Mary. The trailer ends with the AIA director saying you “can’t pander to the gays, they can smell it.”

In response, Rogers, who voices Twink, told Esquire that it wasn’t “a great teaser” nor was it “very indicative of what the show is.” Q-Force animator Alanna Train echoed the sentiment in a series of tweets, acknowledging that the trailer was “awful” and that “the clips they chose and how they edited them together remove all plot, character dynamics, and heart” from the story they created. “People are jumping the gun, calling it homophobic and offensive, when they have only seen his horribly edited 40 second trailer,” she added. “So many amazing and wonderful queer artists worked themselves to the bone on this, so put your assumptions aside and give it a try.”

Other artists who worked on the show have since spoken up, with one saying Q-Force gave them their “first job in animation,” and another praising the production team as a “kind, skilled, and delightful group of people.”

“Representation is this really important and really, really fraught thing, and there’s a lot of anxiety around getting it right, so, obviously, it breaks my heart to think that, for a lot of people, maybe we didn’t do it right,” Liedman told NBC News. “I know that you can have the best intentions, and it doesn’t really matter. It’ll strike people the way it strikes people, but I know that we were coming at this from a really loving place. We were not trying to reinforce stereotypes; we were trying to give people who see themselves in these characters a hug and a pat on the back.”

Indeed, Glen Weldon at NPR wrote that Q-Force is “kinder” than the trailer suggested, and while the characters “initially slot into very broad queer stereotypes,” those tropes are “thoughtfully, cannily exploited” and complicated throughout the season.

Michael Blackmon at Buzzfeed News found the series less compelling, writing that “though the show has some charm,” it’s “weighed down by uninteresting characters and dull ‘jokes,’ which are really just random utterances of pop culture trivia.” Blackman concluded that “Q-Force isn’t as egregious as one may have been led to believe, [but] it certainly isn’t great either” and merely “toes the line between blah and decent.”

Kyle Wilson at Polygon had a similar critique, calling Q-Force “little more than an inoffensive mediocrity,” while Juan Barquin at AV Club noted that the show often feels like a collection of dated and “drafted tweets of Gay Twitter Comedians.”

Still, Daniel Fienberg at The Hollywood Reporter noted that the voice acting and “dynamic animation” by studio Titmouse carries the oftentimes choppy writing — which could perhaps get better if the writers are able to work on a second season. “The first 10 episodes of Q-Force didn’t offend me, nor were they soulless appropriation of queer culture,” Fienberg wrote. “Instead, the show is a somewhat typically bumpy start for a comedy trying to find its voice, or at least trying to find out how to make that voice funny.”