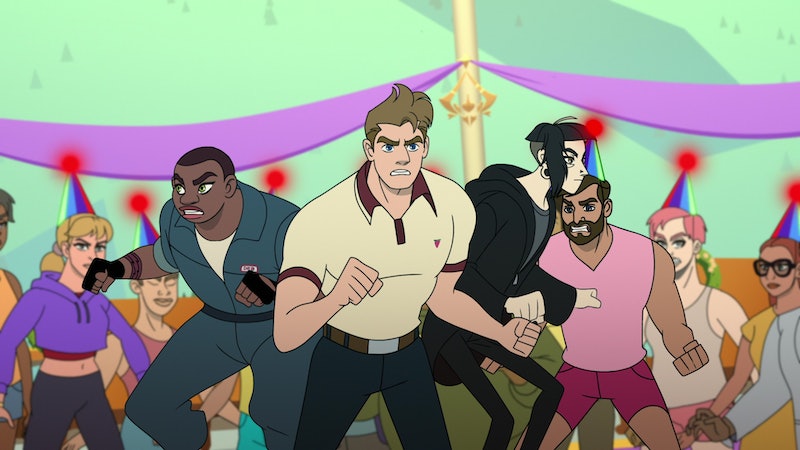 Netflix is bringing together some of your favorite actors for their new animated series Q-Force. Premiering on Sept. 2, the show follows ex-American Intelligence Agency (AIA) operative Steve Maryweather as he leads a misfit squad of LGBTQ+ superspys. After a successful mission, the Q-Force earns the approval of the AIA and are activated as secret agents under one condition: they have to add a straight man to their team. Queer icons, Netflix mainstays, and several newcomers round out its voice cast. Here are all of the stars you can expect to hear.

Hayes first cemented his television stardom on the early 2000s sitcom Will & Grace, making history as one of television’s then-few openly gay characters. He leads Q-Force as the try-hard Agent Mary.

Fans will certainly recognize Harbour from his role as the beloved Chief Hopper on Netflix’s Stranger Things. He also starred in Marvel’s Black Widow as Red Guardian, a disgraced super-soldier from the soviet era. In both projects, Harbour channels a soft — albeit sometimes misguided — fatherly energy, but in Q-Force he plays the dense and aggressively straight Rick Buck, an AIA agent now forced to work alongside his rival Steve Maryweather.

Few entertainers have a voice as recognizable as Sykes’, who fans will remember from Black-ish, Curb Your Enthusiasm, and The New Adventures Of Old Christine along with countless stand-up specials. The usually rye, fast-talking comedian plays Deb, an expert mechanic who fosters over a dozen rescued pit bulls.

Metcalf enjoyed a long reign of television success during the ‘90s as Jackie on the hit sitcom Roseanne. She’s since returned to the small screen in the Roseanne spinoff, The Conners, but many viewers will recognize her for her Oscar-nominated work in 2017’s Ladybird. She played the mother of the titular Ladybird (Saoirse Ronan), instilling the performance with love and vulnerability. As V, however, Metcalf will take a more headstrong approach as the no-nonsense Deputy Director of the AIA.

Beatriz is best known for her role on Brooklyn 99 as Rosa Diaz. The hard-nosed detective is a far cry from her Q-Force character Mia, a partying “girl boss” who rules over the fictional state of Gyenorvya.

Gary Cole is one of those actors who’s seemingly in everything. You may remember him as Kent from Veep or Kurt from The Good Fight, but his voice may be more recognizable than his face. Cole’s dry vocal stylings have appeared in shows including Bob’s Burgers, Family Guy, Archer, and Big Mouth. In Q-Force, he takes on the role of Director Dink Chunley, the head of the AIA and a character who appears to be as straight as they come.

Rogers has appeared in shows including Shrill and Nora From Queens as well as animated series Our Cartoon President, where he voiced Pete Buttigieg. Notably, Rogers produced and hosted the short-lived Quibi series Gayme Show, on which two straight contestants battled head-to-head in physical, mental, and emotional trials to be crowned “Queen of the Straights.” On Q-Force, Rogers plays Twink, the team’s energetic and dramatic master of disguise and drag.

Harrison made history as the first trans actor to be cast in a Disney animated movie after landing the role of Tail Chief in Raya and the Last Dragon. She’s also found success across the comedy world, appearing in shows like Shrill, Ziwe, and I Think You Should Leave. Q-Force isn’t her only foray into animation: she voiced Martha on Netflix’s Tuca & Birdie. Hre, she plays a brilliant yet guarded hacker named Stat.

More like this
If 'Entergalactic' Season 2 Happens, You Could Get A New Kid Cudi Album
By Kadin Burnett
Twitter Is Pouring Out Some Zhampagne As ‘Schitt’s Creek’ Leaves Netflix
By Brad Witter
Jeffrey Dahmer’s Arresting Officer John Balcerzak Got His Job Back After Being Fired
By Grace Wehniainen
Here’s Where You Can Stream 'Schitt's Creek' After The Comedy Leaves Netflix
By Brad Witter
Get Even More From Bustle — Sign Up For The Newsletter