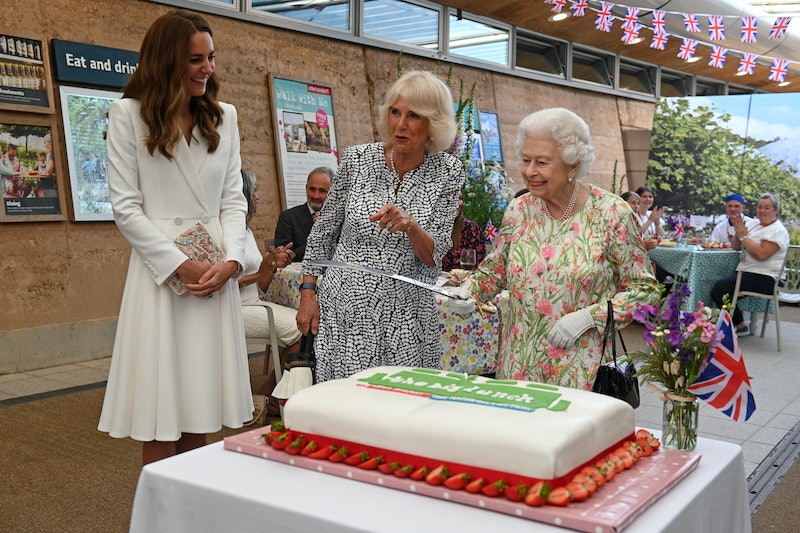 After nearly 70 years as England’s reigning monarch, Queen Elizabeth II is still finding ways to keep the job exciting. She made an ordinary ceremonial cake cutting more “unusual” on Friday, June 11, opting to make the first cut with a sword rather than a knife. Her antics entertained attendees at the event, including Kate, the Duchess of Cambridge and Camilla, the Duchess of Cornwall, and resulted in adorable photos.

The royals attended the event for The Eden Project’s Big Lunch initiative, and while they were there, the queen accepted a request to cut the cake. That led to her borrowing a ceremonial sword from Edward Bolitho, the Lord-Lieutenant of Cornwall, per The Telegraph. Though an aide tried to give her a more practical option, telling her, “There is a knife if you want it,” Queen Elizabeth declined. “I know there is, but this is something a bit more unusual,” she said.

The monarch’s response was met with laughter, as were her attempts to use the sword (upside-down) to slice the large cake. Camilla ended up stepping in to help her while Kate laughed. In the end, the sword worked, but they later swapped it out for a knife to finish the job.

The queen’s unique slicing strategy won over some of the people of Twitter. The royal family account’s tweets showing the process got a lot of comments, including multiple from those who loved what they saw. “The Queen is a great example of how to live each day. Her husband has died, she has endless problems but she cuts the cake like a pro, even if there is a jam jar in the way,” wrote one person. Another joked, “We’ve all been there, want a slice of cake.. can’t find the cake knife so grab the nearest sword.”

The queen has been busy with numerous events this week. Not only has she had a role in welcoming G7 leaders to the annual summit, she is also celebrating her official birthday. Though she turned 95 on April 21, the celebration of the British sovereign, the Trooping of the Colour, usually happens on the second Saturday in June. This year’s festivities were “a little different,” per the royal family, but she still was able to enjoy a birthday parade on June 12, complete with a “magnificent fly-past” and a 41-gun royal salute.

Another more somber affair took place earlier in the week. The royal family commemorated what would have been her late husband’s 100th birthday on June 10. Prince Philip died in April ahead of his centennial. In spite of that, their son Prince Edward shared that the queen is “actually doing remarkably well, per CNN, and that since “life has got considerably busier” lately, “weirdly that sort of fills any particular void.”

And if there’s the opportunity for a cake-cutting moment amid everything, so much the better.