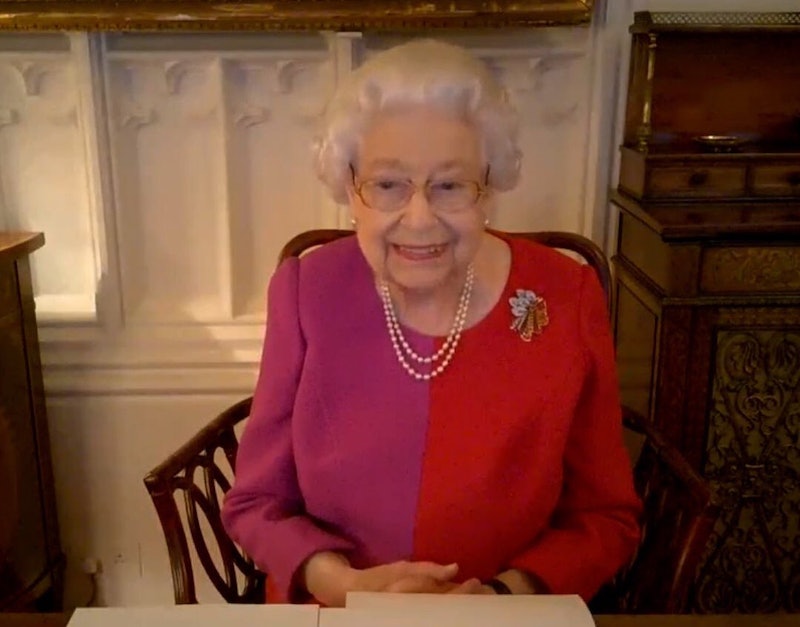 Like the rest of the UK, Queen Elizabeth has become pretty tech-savvy over lockdown. In her most recent video call, the Queen was delighted by a group of children from the Sistema Cyprus Symphony Orchestra, who performed a live concert for Her Majesty.

The kids played a piece of music they wrote especially for the Queen and Prince Philip's 73rd wedding anniversary, titled "Modus Cyprius," per Woman & Home. The Queen appeared to be enjoying their composition and thanked them with a grin and chuckle. "That's very nice isn't it? Well thank you for letting me hear that, it was very nice," she said.

This performance took place during a video call between HRH and three winners of the Commonwealth Points of Light Awards, which celebrates volunteers and people who are making a change in their community.

The Sistema Cyprus Symphony Orchestra founder Nikoletta Polydorou recently received her award from the Deputy British High Commissioner in Cyprus, Ian Whitting. Sistema Cyprus provides free musical instruments as well as lessons to more than 200 children, "many of whom have refugee or migrant backgrounds," the Commonwealth site reads, "helping them build confidence and communication skills with one another."

"Through music, Nikoletta and her team are playing a vital role in integrating vulnerable communities in Cyprus into wider society, as well as educating young people in the power of music to bring people together," Whitting said in a statement.

"I am deeply honoured to receive the Commonwealth Points of Light Award as a unique recognition of my work as a volunteer," Polydorou added. "'Sistema Cyprus' is not a programme, 'Sistema Cyprus' is a family where children and parents were part of every decision that was made."

Polydorou was joined by Len Peters and Ruy Santos, who also spoke to the Queen about their organisations. Peters received the first Points of Light award in February 2018 for his work in Trinidad and Tobago with Grande Riviere Nature Tour Guide Association, a "community-driven conservation organisation" that he founded in 1990, per the Evening Standard. Santos received the Points of Light award in July 2020 for Makobo, a collective working space he founded in 2009.

"Thank you all for taking part in this programme," the Queen said at the end of the call. "I'm delighted to have heard your stories and I think it's wonderful work you are all doing, volunteering so much. Thank you very much."