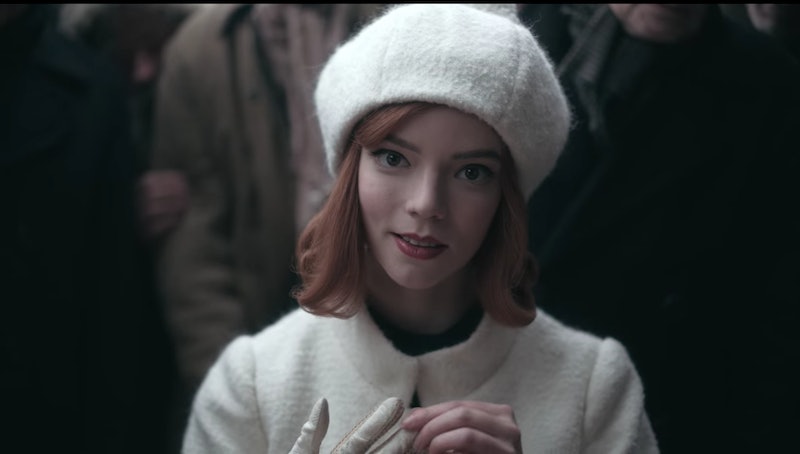 Will Beth Harmon return to Netflix? Anya Taylor-Joy said she would do a Season 2 of The Queen's Gambit in a February 2021 interview with Deadline but told the publication, “Because we never thought about it, there was no discussion about it.” However, that didn’t mean new episodes were out of the question, as Taylor-Joy added: “That said, never say ‘never’ in Hollywood.”

Unfortunately for fans who were trying to be as optimistic as Taylor-Joy, hopes of The Queen’s Gambit Season 2 were dashed at the 2021 Emmy Awards. During the ceremony, series creator Scott Frank told the press there definitely won’t be a Season 2 of The Queen’s Gambit. To soften the blow, executive producer William Horberg revealed the miniseries’ team would reunite for another project.

“I’m so sorry. I hate disappointing anyone, but no. I feel like we told the story we wanted to tell, and I worry — let me put it differently — I’m terrified that if we try to tell more, we would ruin what we’ve already told,” Scott said in the Emmys press room after accepting the award for Outstanding Limited or Anthology Series, per Deadline. “I’ll never say never, but I feel so good about what we did. I would hate to soil the memory.”

Have things changed in two years, though? Fans hoped so, when a tweet that simply read “The Queen’s Gambit 2” was sent from Taylor-Joy’s Twitter account Jan. 30. However, the actor clarified on her Instagram story that she’d been “hacked,” adding her “apologies for all inconveniences.”

The Queen's Gambit, which premiered in October 2020, follows chess prodigy Beth Harmon as she becomes a champion in the male-dominated Cold War-era competitive chess circuit. Beth, who experienced several tragedies in her early life, must also deal with substance use issues along the way. The limited series is based on the novel of the same title, and creators would need to go off-book to continue the show.

Netflix doesn't usually reveal viewership data, but the streaming platform boasted that The Queen's Gambit was the most-watched scripted limited series to date in November 2020, according to Variety. The platform revealed that 62 million user accounts tuned in to watch the show in the first 28 days.

Before Season 2 was declared null and void, Taylor-Joy had ideas about how to continue the series. “It would be very interesting to see how Beth would be as a mother, now that she’s sober and more cognizant of the demons that pull her down,” the actor told Deadline. The Emma star also told the publication that she had no worries about her ability to return to playing Beth on the show: “I said to myself, ‘If we were shooting tomorrow, I know exactly what I’m doing.’ I know how I want to do it; I understand this woman so well.”

Since the show premiered, Taylor-Joy’s schedule has been jam-packed. After earning a Golden Globe for her turn as Beth Harmon, she’s gone on to star in several films — including Last Night in Soho, The Northman, Amsterdam, and The Menu, and will portray Furiosa in the upcoming Mad Max: Fury Road prequel of the same name.

More like this
Netflix Shut Down 'Bridgerton' S3 Rumours About A “Very Dark” Storyline
By Bustle
'The Crown' Season 6 Has Suspended Filming "Out Of Respect" For The Queen's Death
By Bustle Staff
Ashton Kutcher Wants Danny Masterson “To Be Found Innocent” In Rape Retrial
By Jake Viswanath
Here’s Everything Coming To & Leaving Netflix In February
By Jake Viswanath
Get Even More From Bustle — Sign Up For The Newsletter
From hair trends to relationship advice, our daily newsletter has everything you need to sound like a person who’s on TikTok, even if you aren’t.