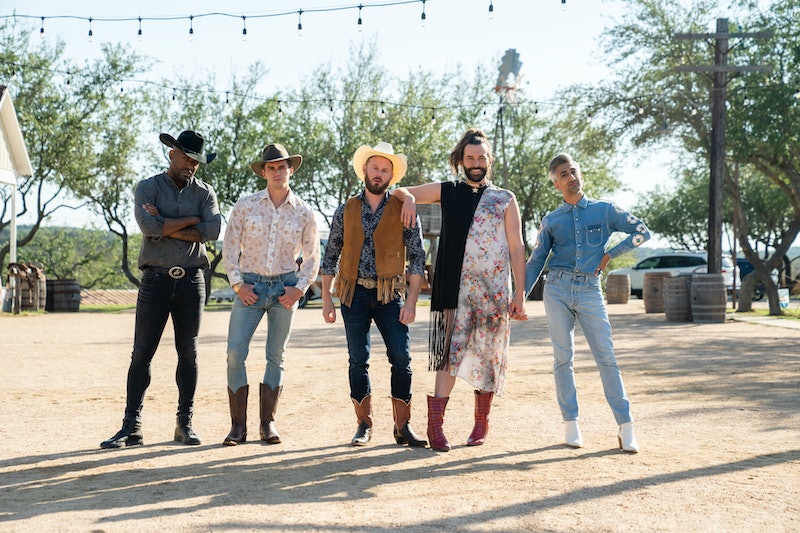 The Fab Five had just completed their first makeover for Queer Eye Season 6 when production was halted for more than a year. “We were here [in Austin, Texas] filming Season 6 and about five days into that, production got shut down because of COVID-19,” interior design pro Bobby Berk explained to OprahMag.com in April 2020. “We didn’t even get the first episode finished. The reveal had happened, our hero had seen the home. The only thing that hadn’t happened was our last scene where we get to watch what’s happened with them.”

When Bobby and his fellow Fab Five members — Antoni Porowski, Jonathan Van Ness, Karamo Brown, and Tan France — returned to Austin to resume filming in 2021, a lot had changed, and production had to bend to meet new challenges. Netflix has yet to renew Queer Eye for Season 7, but if the show continues, the changes made for the remainder of Season 6 will likely stay in place. “I do think for a while this will affect the way we interact with heroes,” Bobby said. “Once we come back there’s still gonna need to be some social distancing, so it’s gonna be hard because all five of us are very much huggers. The very first thing we do is we go and hug.”

During the break in filming, the political climate in Texas also grew increasingly volatile. “They needed us five queers,” Karamo told People in June, adding that he experienced racism and homophobia while filming Season 6. “I think that a lot of times these individuals have never been challenged by someone who is Black. And so you now have someone who's Black making you open up and talk about your feelings.”

That need certainly hasn’t gone away, and given Queer Eye’s ongoing popularity, the show likely won’t be going anywhere either. Here’s everything we know about a potential Queer Eye Season 7 so far.

Netflix renewed Queer Eye for Season 6 in March 2020, several months before Season 5’s summer premiere. Had it not been for the pandemic shutdown, Netflix likely would have released Season 6 in fall 2020. However, lockdown has thrown off the show’s usual production schedule, typically including two seasons per year plus interim specials (one in Australia and one in Japan). Though more than a year and a half passed between Seasons 5 and 6, a possible seventh season could put the schedule back on track with a late spring/early summer 2022 premiere, depending on when the Fab 5 are able to safely film.

Aside from Texas, Australia, and Japan, past Queer Eye filming locations have included Georgia, Kansas, Illinois, Missouri, and Philadelphia. There’s no reason to believe that Antoni, Bobby, Jonathan, Karamo, and Tan won’t continue their Fab 5 roles, but the show’s location and heroes will surely change.

In June, casting directors Ally Capriotti Grant and Pamela Vallarelli explained how Queer Eye finds its heroes to Backstage. “The ideal hero is the person who would never see this coming, or a person who would never nominate or submit themselves,” Vallarelli said, adding that they look for people who represent various parts of whatever city they’re in. “That’s the beauty of finding someone on the ground because they or their family probably would never think, ‘Let me write in and nominate them.’ It’s just not on their radar. They’ve never even heard of the show.’”

Grant SAID that they also look for people they “want to be around and spend time with and root for,” as well as those who “puts themselves last” on their list of priorities. “It’s finding different stories, but also that element of relatability. In Season 6, we definitely looked back at the stories that we’ve told and ask what are the stories that we had yet to tell? That really impacts who will be cast.”

Netflix released the Queer Eye Season 6 trailer just days before its premiere on Dec. 31. Because an upcoming season has yet to be announced, there is currently no Queer Eye Season 7 trailer. This post will be updated as more details become available.

More like this
Brittany Snow Files For Divorce From Tyler Stanaland After 'Selling The OC' Drama
By Grace Wehniainen and Radhika Menon
'Bling Empire: New York’ Star Tina Leung Has A Superhero Alter-Ego
By Alyssa Lapid
Everything To Know About 'Selling The OC' Season 2
By Brad Witter
Blake Abbie Was In A 'Boys Over Flowers' Reboot Before 'Bling Empire: New York'
By Alyssa Lapid
Get Even More From Bustle — Sign Up For The Newsletter
From hair trends to relationship advice, our daily newsletter has everything you need to sound like a person who’s on TikTok, even if you aren’t.