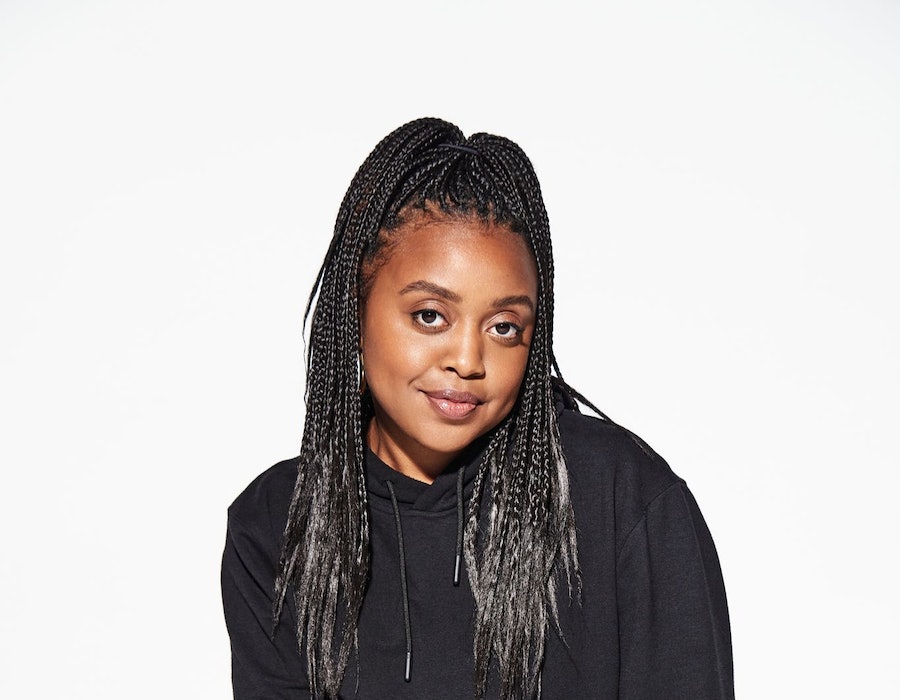 Quinta Brunson is a woman of the World Wide Web. After finding joy in the earliest viral content, the Philadelphia native became an Internet sensation herself, thanks to her hilarious “Girl Who’s Never Been on a Nice Date” YouTube series (her catchphrase, “he got money,” became a meme in its own right). Since then, Brunson has made a career out of being funny online, working her way up from BuzzFeed Video producer to writer and actor on HBO’s A Black Lady Sketch Show, starring alongside the likes of Robin Thede and Ashley Nicole Black. Now, she’s transposing her digital experience to the printed page, making her publishing debut with She Memes Well.

The personal essays in Brunson’s book “time up with the progression of the internet,” she tells Bustle, “from watching it when I was younger, when it was brand spanking new, when YouTube first came out, to later becoming a meme myself in the digital-sharing age... to my relationship with it now.” It’s about her life, but also about how a whole generation — now generations — of people have come of age online. As Brunson says, memes “have influenced all of us, how we think and laugh.”

Ultra-relatable to anyone who spends their days in the recesses of Twitter, She Memes Well is out now from Houghton Mifflin Harcourt. Below, Quinta Brunson talks to Bustle about the power of viral humor, “Instagram faces,” and what’s next.

You end the book with this really great line: “Be like a meme — always taking on new life.” What does that line mean to you?

Memes are evolving and being shared, and I think that’s a good thing, because evolution is not bad. We have to allow ourselves to evolve for the better and not reject change...

We’re in a weirdly progressive time, but there’s also so much pushback against that progression; it’s weird, because the internet is one of the most progressive places. I want people to embrace natural evolution more as we move forward, as we become more progressive as a society. We have to allow things to change and meld. Be a little bit less controlling — that goes for everything. We have to just let sh*t happen, I think.

Do you think that social media has made it harder for the average person to feel adequate? Has it damaged our collective self-esteem?

My honest answer is yes. I look at the filters we naturally use that start changing our features ever so slightly. I remember being bugged out about that when Snapchat started doing it, five or six years ago maybe. The Snapchat filters were so clearly... like, racist? They would always slim my nose out, manipulate my eyes, and it was just fitting a weird beauty standard. I was just talking to one of my girlfriends about this, about never being satisfied with our own faces in the mirror, because of what filters can do and what they show you.

I know. I use [filters] when I don’t have makeup on, but I have had enough time in my life to perceive myself as I was, because I had a childhood before the internet entered the picture. Now that the internet is with Gen Z and the following generations as they grow up, I just hope some regulation is done, because they won’t have the era of self-perception or realization [otherwise].

We’re starting to see powerful people held accountable for violence, whether that’s police brutality or sexual assault. Do you think we would have reached this moment without social media and the internet?

Absolutely not. That goes to the positive side of [social media], where people find community, find cause, start a conversation. I absolutely do not think there would have been a world where people like Harvey Weinstein and R. Kelly would have been dealt with if it weren’t for this. I do think that’s a positive thing, and it would not have happened without social media.

It’s such a double-edged sword. I go back and forth. Some days I f*cking hate Twitter, but without these platforms so many people would not be able to have a voice. So it’s 50-50.

You talk in She Memes Well about getting negative attention for your Bill Cosby tweet in 2017 — an assertion that Cosby deserved jail time for his crimes. (As you write, people were angry about a wide array of things: “comedy, me, each other, women, Black culture, grammar.”) Do you think the response would have been the same today?

I think [the tweet] still could have caused a stir, but I think at this time, we’ve moved more into our echo chambers. I don’t know if that’s a good or bad thing. It can be a protection, but at the same time, conversations are not being had on a grand scale. I don’t know if that’s possible to do on the internet, which leads to the importance of linking up [with people] in real life.

What makes someone good at the internet?

I also think it’s a natural flow of things. Some people are just good at [the internet] and some people just aren’t.