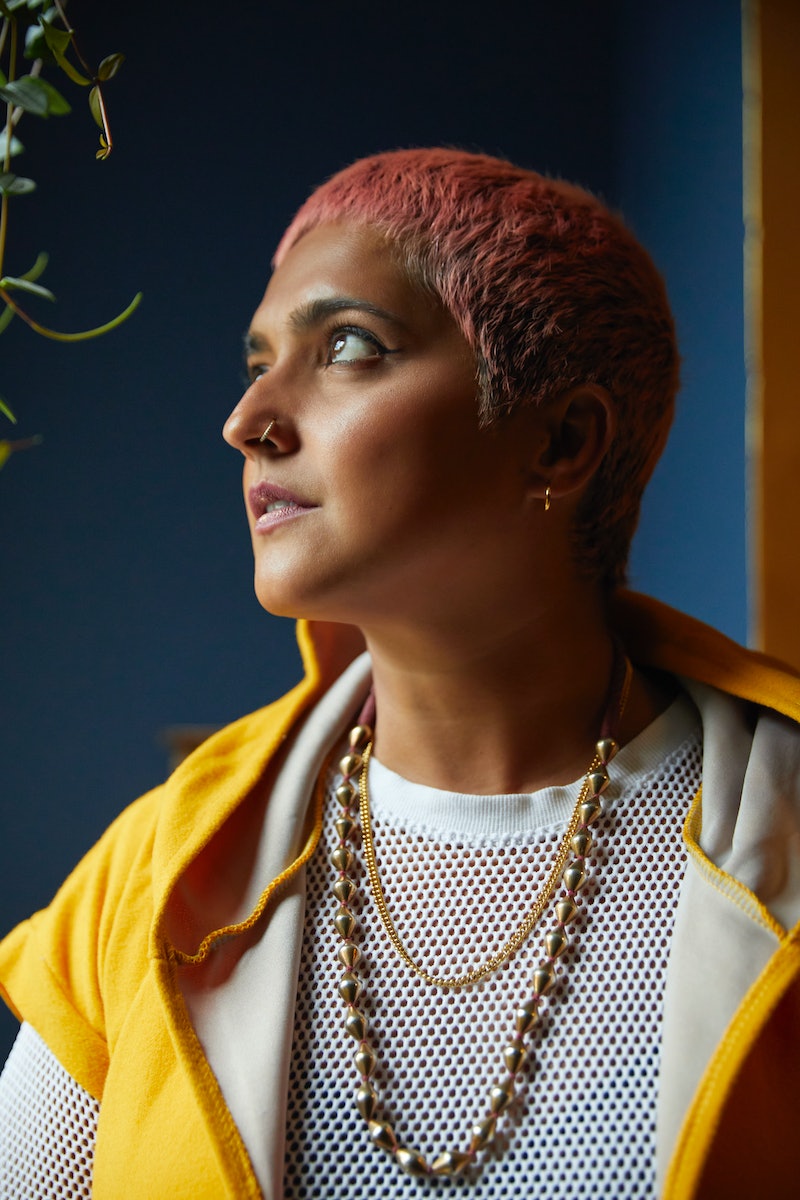 It’s an exciting, if not hectic, time for London-based musician, writer, and activist Reeta Loi. She’s currently putting the finishing touches to her debut novel Shop Kid, she’s got a track called Remedy coming out soon and she has just launched a GoFundMe page for Gaysians, the umbrella brand she founded to provide support for LGBT+ South Asians.

On top of all that, Loi has also been involved with a powerful new project created in collaboration with MASSIVE Cinema and The British Film Institute to celebrate the launch of the upcoming film Mogul Mowgli, written by Riz Ahmed (who also plays the film's lead character, Zed) and Bassam Tariq.

The project, titled Into Zed’s Head, is a digital experience showcasing the untold stories of South Asian creatives in the UK. In line with the film’s main themes – dual identity, authenticity, legacy, and trauma – the contributors have been invited to share their experiences of growing up as South Asians in the UK and explore how their cultural heritage has shaped their art.

Alongside Loi, the digital platform features a range of musicians, writers, and creators from the South Asian diaspora who are making waves in their respective fields. This includes illustrator and designer Jasmin Sehra, musician Anoushka Shankar, and actor and comedian Guz Khan, to name just a few.

I spoke with Loi about her involvement in the project, how she learnt to stop compartmentalising her identity, and the British Asian creatives who should be on everyone's radar.

Priyankaa Joshi: Tell us a bit about your involvement with Into Zed’s Head.

Reeta Loi: So I was asked to watch Riz’s epic new film and then, as a creative, explore some of the themes that came up for me in terms of my history and my art. For me, the themes it really brought up were identity and what it means to be diaspora, intergenerational trauma and our relationship with our art as British South Asians.

I feel really inspired by the project and, as an artist, to have an excuse to spend time exploring these kinds of themes is really, really rare. We struggle as British South Asians to access our art so I was really chuffed to be asked and was like, "Yeah, I’m in!"

"Through the project, people will get a deeper insight into our artistic processes away from spaces like Instagram."

PJ: What do you hope people will take away from the project?

RL: I hope people will be inspired and feel like they’re part of a community. Through the project, they’ll get a deeper insight into our artistic processes away from spaces like Instagram. Often we see these static images of success and it can feel inaccessible, so sharing our processes, challenges and struggles is really good for people to see. I think if I’d have seen more of that growing up, I might have thought, "Hey it’s okay to do this."

Twelve years ago, when I got signed and started touring, I didn’t see South Asian women like me making music so I was really trying to compartmentalise myself and fit into spaces. Now, I bring my whole self to my art and I really hope that will inspire people.

PJ: Mogul Mowgli explores the notion of dual identity. Can you tell us about your experience growing up in the UK and how you learnt to navigate your identity?

RL: When I was six, my family moved from Southall, which is a bustling Indian metropolis, to Winchester, where we were the first Indian family. So there’s little genderqueer me with my moustache going to school with all these white kids and trying to assimilate. Then, at home, I was adapting to this very Punjabi environment. When I look back now, I realise how much I was compartmentalising and how many parts of my identity have been marginalised. In fact, it was only today that I realised I’m never in a space that I’m not an 'other.'

"As I’ve got older and stopped compartmentalising my identity, I can feel the power in all of my intersections."

It would be easy for me to feel like I don’t know how to navigate life but as I’ve got older and stopped compartmentalising my identity, I can feel the power in all of my intersections. I love being Indian, I love being British, I love being queer, and I love being a woman. When you start to celebrate the parts of you that have been marginalised, you feel so much freer.

PJ: Do you feel hopeful that South Asian representation is improving in the UK?

RL: Hell yeah! I feel like, in the last four years, there’s been a massive shift as we’ve started to get access to information and use social media to connect and find our tribes around the world. I meet so many more diverse and representative people in queer culture and creative culture than ever before. It’s really exciting.

PJ: Do you have any thoughts on what more can be done to push the creative industries to a place greater inclusivity and representation?

RL: We need more people like us in decision-making roles and on the other side of the table. We know that if we don’t have board members and decision-makers on the business side of creative industries that represent us, we’re less likely to get that cut though. I also think, as South Asian creatives, we have to start seeing ourselves as a community and support each other. We’re stronger in numbers. So it’s about representation behind the scenes and people throwing down the ladder to bring others up, like Riz has done with this project.

"It's about representation behind the scenes and people throwing down the ladder to bring others up, like Riz has done with this project."

PJ: You recently said that now is a great time to be a person of colour. Why do you think that?

RL: I feel we’re living in a time when we don’t have to assimilate anymore. We can start looking at how to bring all the flavours of who we are and share that with the world, individually and collectively. We have to stop thinking we’re a minority and that we have to fit in. It’s time to say what we want, although we do have to be smart and strategic about it. I think it’s a very empowering time.

PJ: Who are the British South Asian creatives you think we need to know more about?

RL: I love Joy Crookes’ music – she’s one of our biggest talents and I’m very proud to say that she’s South Asian. Another brilliant artist is Nadine Shah, who not enough people know about. There’s also an incredible Bollywood dancer called Kaajel Patel. Then there’s Zia Ahmed, who’s a spoken word artist and playwright, and poet and writer Suhaiymah, known as The Brown Hijabi, is also fantastic. That’s just a handful! We have tonnes of talented people, we just have to platform more of them.

"Every time I see someone that represents a part of my identity or one of my intersections, it propels and motivates me."

PJ: Which South Asian creatives do you look to for inspiration?

RL: There are a lot of people who inspire me in different fields. Riz is certainly one of those people. I remember reading his Guardian article years ago and being blown away. It was around the time The Good Immigrant came out and I was like wow, this really feels like the start of something. Every time I see someone that represents a part of my identity or one of my intersections, it propels and motivates me.

More like this
Michaela Coel Has Some *Thoughts* About The Nepo Baby Discourse
By Maxine Harrison
Prince Andrew’s Infamous Newsnight Interview Is Being Made Into A Film
By Frances Stewart
Stephen Graham & Steve McQueen Are Working On A Wartime Drama
By Darshita Goyal
Paul Rudd’s Secret To Eternal Youth Is Something You Can Try At Home
By Darshita Goyal
Get Even More From Bustle — Sign Up For The Newsletter
From hair trends to relationship advice, our daily newsletter has everything you need to sound like a person who’s on TikTok, even if you aren’t.