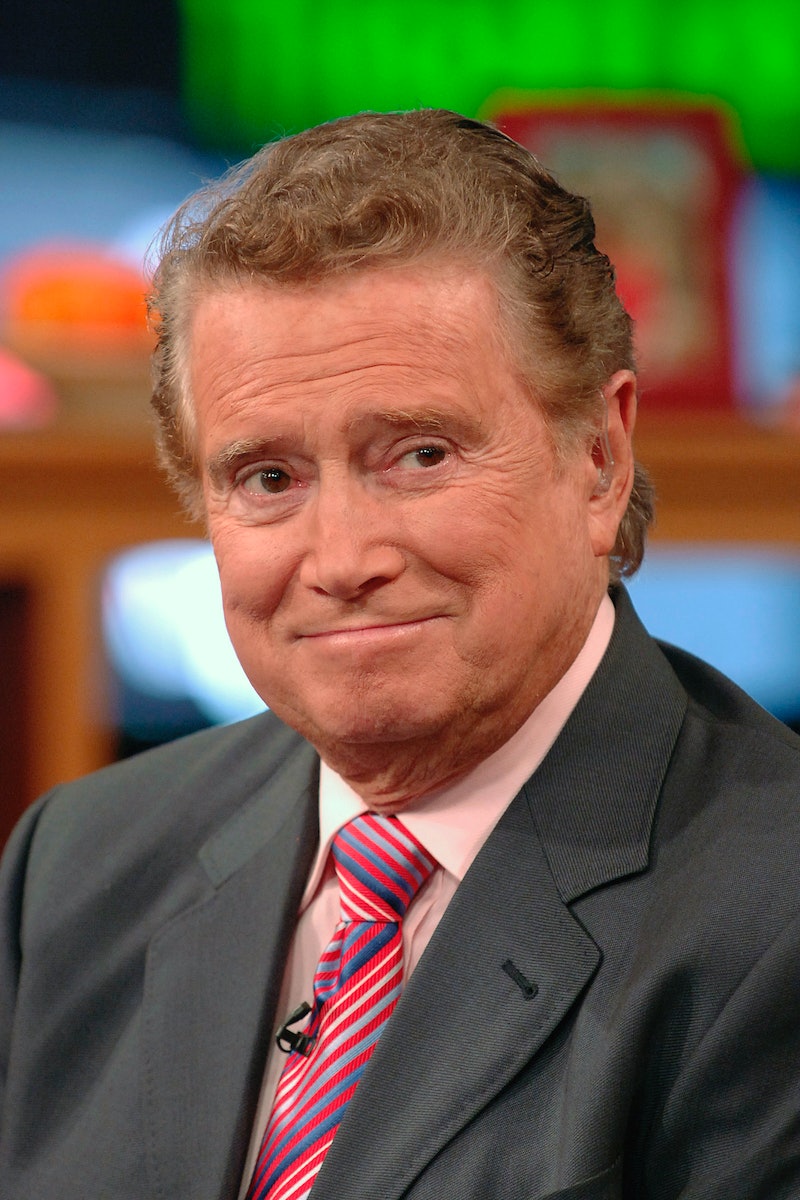 Famed daytime talk show and game show host Regis Philbin has died at the age of 88. The longtime host's family confirmed the news to People in a statement on Saturday, July 25 that read in part, "We are deeply saddened to share that our beloved Regis Philbin passed away last night of natural causes, one month shy of his 89th birthday."

The Philbin family's statement went on to thank the 88-year-old's many fans. "His family and friends are forever grateful for the time we got to spend with him – for his warmth, his legendary sense of humor, and his singular ability to make every day into something worth talking about," they said. "We thank his fans and admirers for their incredible support over his 60-year career and ask for privacy as we mourn his loss."

Best known for hosting Live! with Regis and Kelly (and Live! with Regis and Kathie Lee before that) and the U.S. version of Who Wants to Be a Millionaire, Philbin spent more time in front of TV cameras than anyone else in the industry according to The Guinness Book of World Records. In 2004, Guinness recognized him for spending more than 16,000 hours on TV — smashing the record previously held by Hugh Downs, according to The Hollywood Reporter. In addition to his hosting gigs, the Notre Dame alum also appeared in numerous TV shows and movies including How I Met Your Mother, 30 Rock, New Girl, Seinfeld, and Shrek.

The news of his passing has led to an outpouring of tributes from not only his loved ones and the many celebrities that he interviewed over his 60-year career, but also from fans eager to share their favorite memories of Philbin. Actor and writer Justin Root tweeted his thanks to Philbin for "hosting one of the greatest highlights of my life," alongside a series of clips from his appearance on Million Dollar Password with Betty White. Meanwhile, podcaster Thomas Mariani tweeted a clip from one of the host's many guest appearances on The David Letterman Show, reminding the internet of the time Philbin showed up dressed as Shrek.

After spending six decades on TV in one form or another, there are precious few celebrities that Philbin didn't interview over the years, and his impact on Hollywood can be seen in tributes from everyone from his former co-host Kelly Ripa to Bachelor host Chris Harrison. "We are beyond saddened to learn about the loss of Regis Philbin," Ripa wrote on Instagram. "He was the ultimate class act, bringing his laughter and joy into our homes everyday on Live for more than 23 years. We were beyond lucky to have him as a mentor in our careers and aspire everyday to fill his shoes on the show. We send our deepest love and condolences to his family and hope they can find some comfort in knowing he left the world a better place."

Philbin's legacy in the TV industry will continue to live on, not only through the lives he impacted, but also through his family. The late host is survived by his wife of 50 years Joy Philbin, and daughters J.J. Philbin and Joanna Philbin, as well as his daughter Amy Philbin, who he shared with his first wife. His daughter J.J. has followed in her father's footsteps by pursuing a career in TV as a writer on shows like New Girl and Single Parents, the latter of which she created.

More like this
Everything To Know About 'And Just Like That...' Season 2
By Jack Irvin and Grace Wehniainen
This 'One Tree Hill' Wardrobe Error Is Going Viral On TikTok
By Brad Witter
Ashton Kutcher Wants Danny Masterson “To Be Found Innocent” In Rape Retrial
By Jake Viswanath
'Abbott Elementary' Fans Probably Missed This 'Parent Trap' Easter Egg
By Sam Ramsden
Get Even More From Bustle — Sign Up For The Newsletter
From hair trends to relationship advice, our daily newsletter has everything you need to sound like a person who’s on TikTok, even if you aren’t.