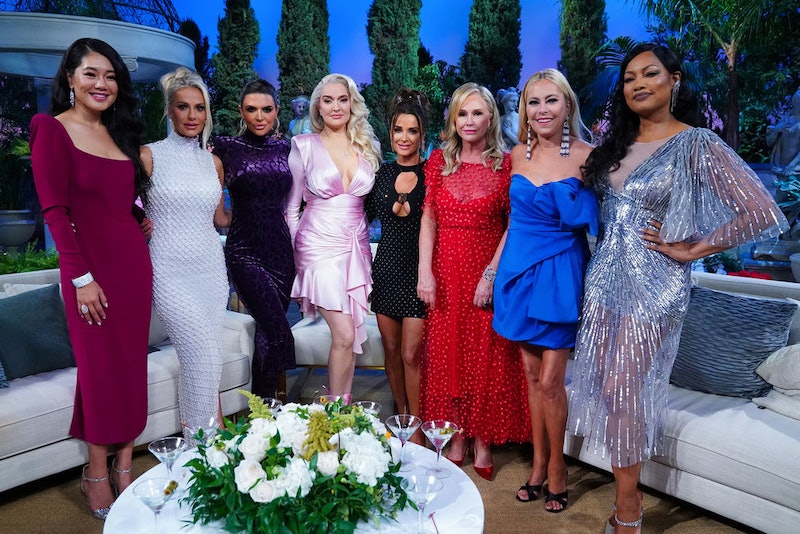 Following The Real Housewives of Beverly Hills’ drama-packed eleventh season, Bravo reportedly wasted no time jumping back into production to continue chronicling Erika Jayne’s ongoing legal battle and divorce from Tom Girardi. Part 1 of the unprecedented four-part reunion — during which host Andy Cohen grilled Erika over Tom’s alleged crimes and whether she played a role in them — scored a season-high viewership with more than 1.5 million people tuning in, making Season 12 a foregone conclusion (Erika has denied any involvement in the fraud and embezzlement claims brought against Tom).

Bravo has since released several details about the upcoming season — including the introduction of a new Housewife and “friend of.” Here’s what to know.

Will Erika Jayne Be On RHOBH Season 12?

Though Erika’s lawyers advised her not to film for RHOBH Season 11, she explained during the reunion that she stayed on the show because she has “nothing to hide.” She added that she’s “not a quitter” and “wanted to honor” her commitment to the series. “I wasn’t going to run away from what’s coming at me,” she said.

Bravo has confirmed that Erika will be back again for Season 12, with cameras continuing to document her case as it unfolds in real-time. However, a press release teases that Erika will be focused on finding a fresh start for herself — and when the other women grow concerned that she’s “gone too far in her quest to move forward, tensions boil over.”

Erika told Bustle in May 2020 that she plans to stay on RHOBH “until it’s not fun anymore.” That was before the Tom scandal broke, but it hasn’t seemed to deter her from starring on the show.

The Rest Of The RHOBH Season 12 Cast

Cameras were reportedly rolling at the Bat Mitzvah of Kyle’s 13-year-old daughter Portia, with Instagram photos showing Dorit, Sutton, Lisa, and Crystal all in attendance. Erika was reportedly invited but “could not make it,” per Us Weekly.

Garcelle, who previously said she was “on the fence” about returning for Season 12, wasn’t in photos but commented that Kyle’s video of Portia and Mauricio’s father-daughter dance was “so sweet and special.” Several of the women (including Garcelle) also attended Paris Hilton’s recent bridal shower and dressed in costume for Kyle’s Halloween Kills movie premiere on Oct. 12.

In addition to the returning cast, Season 12 will include two new faces. Diana Jenkins, a close friend of Crystal’s, will join the show as a Housewife, while Garcelle’s BFF Sheree Zampino will join as a “friend of.”

According to Bravo, Diana is a A Bosnian war refugee who married into “an astonishing banking fortune.” The network describes her as a “formidable match for anyone who attempts to cross her.” She recently experienced a traumatic miscarriage, and Season 12 sees her focusing on trying to have a new baby.

Sheree, meanwhile, is the ex-wife of Will Smith and one of Garcelle’s best friends. Bravo teases that she’s “unafraid to speak her mind” and “quickly forms strong opinions about her new friends.”

The RHOBH Season 12 trailer includes plenty of highs and lows. In addition to Erika’s quest to start over (“I’m having a lot of sex!” she proclaims) and Diana’s attempt to grow her family, Season 12 will see Dorit grapple with the terrifying robbery at her home in late 2021. Lisa Rinna will face the loss of her mother, while Garcelle begins to realize that the long hours she’s putting into her talk show and writing her memoir is affecting her relationship with her kids. Kyle will celebrate the engagement of her oldest daughter and get sucked into old family drama, and Sutton — who’s finally moved into her new home and ready to play host — will dip her toes back into dating. Of course, there will be plenty of conflict between the women, too. Crystal takes “a more honest approach to expressing her feelings to the ladies,” but “realizes that the secrets she has held onto may cost her some hard-earned friendships.” And one person’s lack of sympathy for Dorit after the robbery will send ripples through the group.

More like this
Everything To Know About 'RHONY' Season 14
By Jake Viswanath, Alyssa Lapid and Brad Witter
RHOP’s Robyn Dixon Explained Why Juan Paid For Another Woman's Hotel Room
By Brad Witter
Rachel Fuda Gave Birth Just Weeks Before 'RHONJ' Season 13
By Brad Witter
Everything To Know About 'The Real Housewives Ultimate Girls Trip' Season 4
By Jake Viswanath
Get Even More From Bustle — Sign Up For The Newsletter
From hair trends to relationship advice, our daily newsletter has everything you need to sound like a person who’s on TikTok, even if you aren’t.

This article was originally published on Oct. 27, 2021