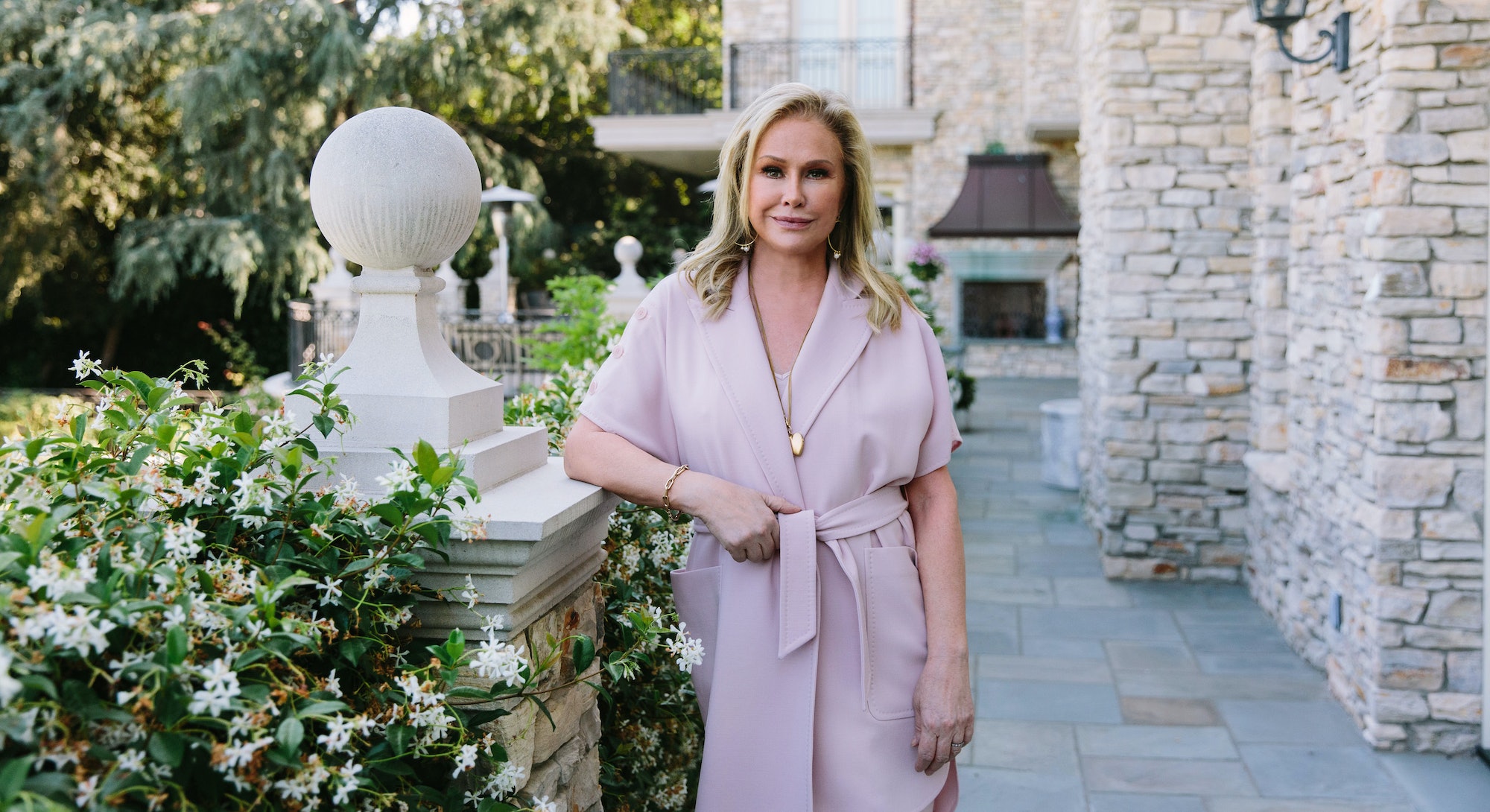 Stepping into Kathy Hilton’s palatial Bel Air home is like a fairy tale, especially on a blisteringly hot day like today. A blast of air conditioning welcomes you into the immense, black-and-white tiled foyer where Hilton is waiting with a very attractive offer: “Would you like a chocolate milkshake?” Hilton is already drinking one. “It’s like the milkshake at the Beverly Hills Hotel, down at the old-fashioned drug store counter. It tastes like that and it’s actually healthy.” Her doctor had told her she needed more protein, so she started drinking these daily. “I’m in love with it,” she says, sipping hers through a straw with a smile.

Kathy Hilton is kind of a goof. This has become clear since she joined her half-sisters, Kim and Kyle Richards, on this season of The Real Housewives of Beverly Hills, where she chugs Red Bull in the dark while trying to get to sleep (“I thought it was just, like, a soft drink,” she tells an incredulous Kyle). But she’s also cool in a way one might not expect. The mansion has some traditional touches, like a cabinet of blue and white porcelain figurines and an antique painting hanging over the stairs of two young girls holding hands, reminiscent of her daughters Paris and Nicky. But the first thing you see when you walk in is a row of Takashi Murakamis. In the main living room, the piece above the hearth is an Andy Warhol print of Mick Jagger (Hilton loves the Rolling Stones). The house was built in the ’30s and feels very Old Hollywood, but the interiors are pure Hilton: chic but laid-back, a little bit humorous, and never trying too hard. A picture of Hilton’s late friend Michael Jackson is on the wall behind her as we settle in the shady room that functions as her office. “Bubbles kissed me!” she giggles when I ask if she knew Jackson’s monkey.

On RHOBH, Hilton has slipped easily into the role of jester, bringing a Catherine O’Hara energy that counterbalances the show’s more serious arguments. Maybe it’s because as the eldest Richards sister, and as the mother of two famous sisters herself, she’s used to dealing with sororal relationships. “I am a funny person,” she says, adding that she’s “always” been a prankster. She doesn’t even think she’s been especially funny on the show yet. But her martini prank, where she pretended to chug martinis that were actually water with an olive in a martini glass, was a season highlight. “I knew it would be hysterical, but then again I took the chance. What if they got mad at me? That worried me a little bit.”

While her half-sisters made the Housewives franchise famous, Hilton never liked seeing her family’s personal drama played for entertainment on the small screen. It wasn’t until last July that Kyle asked her to consider it. “Kyle and I had issues for a long time, [but] we started getting in a better place,” she says. “It was always maybe, never yes, [then] I finally thought you know what, what do I have to lose? I know I’m not a fighter unless I get pushed, and I’m not going to cuss or make a ridiculous fool out of myself.”

Hilton’s antics playing the fool — “Who is Hunky Dory?” she asked Sutton Stracke in Episode 8, apparently eager to put a face to the name — have made her a fast fan favorite. “Hilton breathes both humor and absurdity into a cast that has often erred on the side of taking themselves far too seriously,” says Lara Marie Schoenhals, author and host of Sexy Unique Podcast. “She navigates the image-conscious world of RHOBH on her own terms with absolute ease, and when she does come around you get the sense that she’s genuinely fun to hang out with.”

Perhaps it helps that Hilton knows how she comes off and isn’t worried about getting a bad edit or becoming a villain. “I’m very comfortable with myself. I like people, and I think people generally like me,” she says. “I’m interested in people. I’m thoughtful and I’m sensitive to people. I’m really easy. Easy breezy.”

Kathleen Elizabeth Hilton was born in Manhattan. Her mother, Kathleen, known as Big Kathy, and stepfather Kenneth Richards moved the family to Beverly Hills when little Kathy was a young teen. While Kim and Kyle found success as child actors, Hilton was not interested in being a star. She did a little acting at first, “But I didn’t really like it that much. I wanted to do my own thing, like go out and have fun and have sleepovers and not have to worry about ‘Oh you can’t get a suntan over the weekend because it won’t match up [on screen].’” She wanted to be a kid, in other words.

What of her infamous love of “playing dentist” that Kyle mentioned on the show? “Well, I played dentist. But now I want to clarify, they weren’t real tools. We all had our little doctor kits and I put the little stethoscope... I mean I was just a character, and I would sit them on the toilet with the little fuzzy covers. I would take one of those hand towels and put little hair clips, and I’d have a little thing all set up with a scope, and little concoctions. And Kim and Kyle would help me as little assistants. Kids would come over, we would play dentist. And then we’d play store, we’d play house. I was not just a dentist.”

She met her husband, Rick Hilton, at a party in Los Angeles when they were teenagers. “I thought he was so cute,” she recalls. But they both dated other people as well. Rick was a bit of a playboy, and Hilton liked the challenge. When Rick went off to college, he and Kathy would see each other for dates when he was in town. Her mother thought Rick was too confident at first, but Kathy says, “He’s bold and brazen, he’s a Leo!” Eventually her mom, an Aries, came to respect his boldness. They got together for real when Kathy turned 18 and moved to New York. He proposed in Tahoe, while they were in bed together watching The Flintstones.

Hilton thinks of herself as a New Yorker, but when she and her husband moved back there with their young daughters, it wasn’t without its challenges. “They went from being dressed like twins with gloves, and little charm bracelets, and little hats,” she says. “And then we moved to New York. I’ll never forget we went to Toys ‘R’ Us down on Park Avenue in the 30s. And we heard some noise and we thought somebody was shooting guns. Rick’s like, ‘I knew we shouldn’t have come back here. This city is getting dangerous.’” Then there’s the time legendary street style photographer Bill Cunningham tried to take their photograph on 5th Avenue between Bergdorf’s and Tiffany’s. “This man gets off his bike with the blue sweater,” she says. “We did not know who he was. We were so scared that everyone started running.”

In spite of all this, she tried to give her own children a normal family life, with trips to Central Park instead of the Crillon debutante ball in Paris, which Nicky and Paris were invited to attend but declined (“I’m like, I don’t blame you,” she says of their decision not to attend. “Where the other mothers... a lot of them were clamoring.”). She takes a call from Nicky during our chat in which she asks where she should stay while she’s in New York — “The Crosby? I would love it? It’s not too loud and obnoxious?” — before asking how far it is from Watch What Happens Live where she’s due to appear. Behind her, there’s a picture of Paris with Karl Lagerfeld that Hilton tells unsuspecting guests is Paris and her ex-boyfriend. “I do that to people that can’t see that well far away. I’ll go, ‘Thank God Paris finally met someone age-appropriate.’” She’s a big fan of Paris’ real boyfriend, Carter Milliken Reum. The two got engaged on a private island earlier this year.

Hilton’s sparkle dims only when we discuss her daughter’s revelation in her recent documentary that she was abused at a boarding school in Provo, Utah. Did Paris tell her about the documentary in advance? “No, but she’s always doing something, so it’s hard for me to keep up.” Did she tell her about her experience at Provo in advance? “No,” she says, quietly. “I don’t think at that point that she even knew the question [about her schooling] would be asked.” Once Hilton did know about her daughter’s experience, she says, “I kept thinking to myself, Why wouldn’t she say something? Why would she not say something? I also got into such a depression. I didn’t want to talk to Paris about it too much until I had talked to a therapist.” She’s since heard from close friends whose children also suffered abuse there. “But these are very personal secrets,” she says.

As of now, she has not watched the film — “Let’s just put it this way: I’ve seen the little trailer things, and I would not watch that documentary” — but she is proud of her daughter for speaking up. “She’s already passed laws and helped people.” Paris is more like Kathy than people know, she says. “I don’t think she knows she’s funny. I really don’t. She’s goofy, I mean I also see a side that no one else sees.” She says they amuse each other on planes by making funny faces.

So what’s next for Kathy Hilton? She hasn’t decided yet whether she’ll come back for a second season of Housewives, and right now she’s more interested in her concept for a prank show. “I would love to be an Uber driver, and sell treats in the front seat. I’d like to have a thermos of coffee, gifts in the trunk, snacks, food, LA Dodgers hats, things that they could shop. And I would love for them to tell me where to turn. And then I’m just going to go the wrong way and drive them crazy. And then ask them if they would like a coffee or a treat, and then say to them, ‘That will be 35 cents for the coffee.’ And we have gifts. Where are you going? You’re going down to the beach, you need sunblock? Towels? A beach hat? And have all these things, but then give these very minimal prices. And then explain to them that we’re going to pull over, because we have to kind of settle this up, because this is not part of the Uber. Twenty-five cents, 10 cents for the doughnut. Wouldn’t it be funny?”