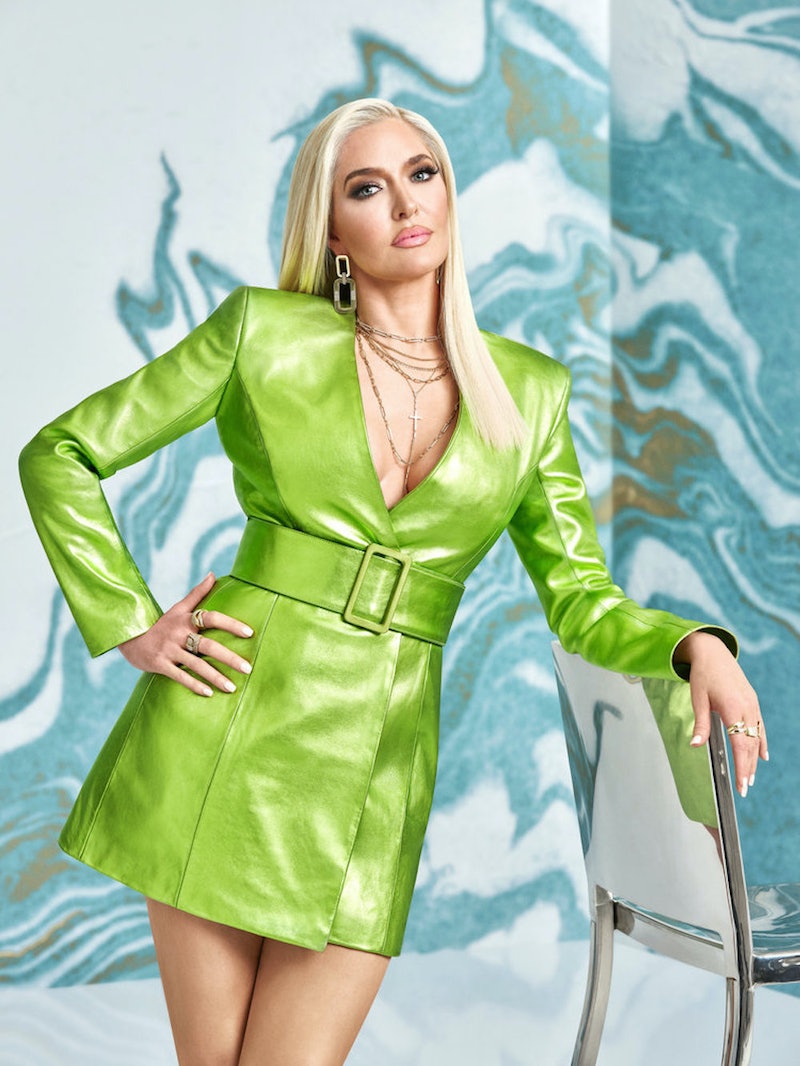 After razzle-dazzling a Broadway audience as Roxie Hart in Chicago in January, Real Housewives of Beverly Hills star Erika Jayne got a curtain call surprise that left her overcome with emotion. The "XXPEN$IVE" singer's RHOBH costars Lisa Rinna, Kyle Richards, Teddi Mellencamp, Dorit Kemsley, and Sutton Stracke had been waiting in the wings with bouquets of red roses. Noticeably absent, however, was Denise Richards, whom fans learned in the RHOBH Season 10 premiere had "stopped shooting with the group" a month earlier.

That conflict will likely be a blip on the radar by the time the reported affair between Denise and Brandi Glanville stirs up more drama among the group. According to Erika, Brandi backed up her side of the story with receipts, but that doesn't mean she necessarily jumped right into anyone's corner. "I'm not team anyone other than Team Erika," she says. "I was shown some things, and based upon what I was shown, I made my decision."

As seen in the RHOBH Season 10 trailer, Erika did draw a line in the sand once Denise's husband Aaron Phypers jumped into the fray, however. ("Come see about me, I don't give a f*ck," she tells him in one scene.) "Aaron spoke to us as a group in a way that I just didn't think was necessary, so when he asked me 'do you really want to go there?' it was like, yeah, I'm not backing down from my position," she adds.

When all is said and done, however, Erika says all it would take for her and Denise to rekindle their friendship is a "simple conversation" — though she doesn't expect that to happen until the RHOBH Season 10 reunion. "Look, all the things that happened between Denise and I are perfectly capable of being resolved," she explains. "Nothing that major happened between us. I think these kinds of disagreements are normal on reality TV shows. That's what happens, and here we are."

That drama aside, Erika promises there's plenty of "fun stuff" to come this season as well: "Minus the Denise communication stuff, the group as a whole moved on, and we had a lot of fun together. There's fashion, there's food, there's fun, there's tears, there's laughter, good times, bad times, blowouts, crises, the whole thing. You're gonna enjoy it."

More like this
RHOP’s Robyn Dixon Explained Why Juan Paid For Another Woman's Hotel Room
By Brad Witter
Everything To Know About 'RHONY' Season 14
By Jake Viswanath, Alyssa Lapid and Brad Witter
Rachel Fuda Gave Birth Just Weeks Before 'RHONJ' Season 13
By Brad Witter
Erika Jayne's Estranged Husband Tom Girardi Has Been Indicted On Fraud Charges
By Jake Viswanath
Get Even More From Bustle — Sign Up For The Newsletter
From hair trends to relationship advice, our daily newsletter has everything you need to sound like a person who’s on TikTok, even if you aren’t.