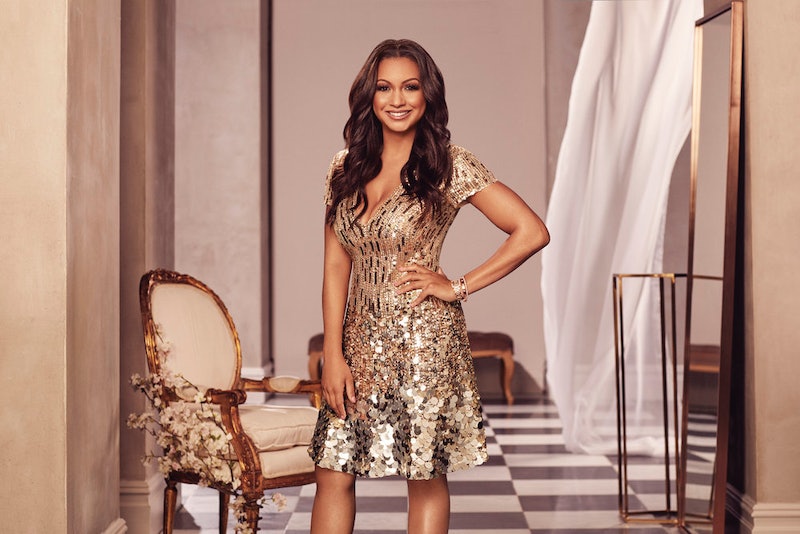 In the Real Housewives of New York City’s Season 13 premiere, Eboni K. Williams introduces herself as the “definition of a multi-hyphenate,” which is putting it mildly. She practiced law for seven years before transitioning into a broadcast journalism career on networks including CBS and Fox News. She also wrote the best-selling 2017 book Pretty Powerful: Appearance, Substance and Success and hosts REVOLT Black News as well as her own podcast, Holding Court with Eboni K. Williams. Now, she’s stepping into yet another new role: becoming RHONY’s first Black housewife.

Before filming for the show, Eboni sought out the advice of Garcelle Beauvais, who became the first Black cast member of The Real Housewives of Beverly Hills in 2020 and whom she’d worked with while co-hosting The Real. “She was like, ‘You got this, girl. Be yourself. We’re obviously on two different franchises with two very different kinds of cast mates, but I really know that you’re going to be able to hold your own,’” Eboni tells Bustle.

Below, Eboni teases what’s ahead on her first RHONY season, including navigating tough conversations about race, tension with Luann de Lesseps, and her unlikely friendship with Ramona Singer.

How would your friends describe your personality?

Potent is the word I’ve heard them use a lot recently. What you see is what you get. Consistent, extremely loyal, very direct. You know those corny Cosmo quizzes we used to take in high school? I am the one in the friend group who tells you what you need to hear, not necessarily what you want to hear. But I also tend to show up with the most love.

Yeah, but in the way that any person representing marginalized people has the responsibility of representing not just themselves in an individual capacity but the greater perception of their people and their value systems. After 13 years, we’re representing a Black woman’s experience in New York City for the very first time. That’s an honor and a privilege and a responsibility to make sure that I do not just my community proud, but — as adequately as I know how — the beauty and the brilliance and also the complications of being a Black woman in New York.

How do you balance bringing your much-needed perspective with the fact that it’s also not your job to educate your co-stars about race?

I’ve been aware for a long time that white supremacy and systems of Black subordination were not created by Black people. Therefore, it actually cannot be our job. We’re not in a position to destroy and dismantle those systems. That will ultimately be up to the creators of those systems, which have been and continue to be maintained by white America. When people try to make it my responsibility or the responsibility of Black Americans to “teach me,” girl, no. You need to teach yourself. What I don’t have is the time to sit around all damn day teaching y’all because I have work that pays bills. That job doesn’t pay.

In the season premiere, Sonja comments that she’s trying to be politically correct, so her Koi fish are every color. You played it off in the moment, but said in your confessional that it felt like a lame attempt to connect to the racial diversity of the moment, even though you gave her points for trying. Did awkward conversations like that persist throughout filming?

That was honestly the tip of the iceberg, and I expected it. I think it was actually a really good thing in the sense that it is inevitable that if we are going to get better as a society in terms of understanding and co-existing across racial and cultural distinctions, you can’t gloss over it. I think that’s a misstep that a lot of people make when it comes to race in America. What you see this season is the ladies and I going through it. Is it hard? Yes. Is it uncomfortable for them? Yes. Even for me? Yes. I have a degree in Black studies, but it’s still hard.

What responses did you get from the other women?

I think what Sonja Morgan got the earliest was that I have such a silly, ridiculous side to me that is full of laughter and fun. I couldn’t get to that place with [the other women] to be able to relax until I was confident that they were all supremely clear on where I stood on the issue of liberating my people and on Blackness in America. After that, girl, we can have the best kiki of your life. But we can’t get to the kiki until we get through. Sonja was really clear on that and actually really helpful in terms of trying to translate that message for the rest of the group. And by group, I mean Ramona and Luann.

You and Luann were acquainted before the show. How did your relationship evolve throughout the season?

We go through it. Lu is a resilient woman. She’s gone through a lot with her marriage and divorce, with her arrest, with sobriety, and I have a lot of respect for Luann as a result of that resilience and what she’s been able to accomplish. I think all relationships are based on respect, and I think it took Luann a minute to develop a baseline of respect for who I am. I’d like to think we got there throughout the course of the season.

Was your relationship with Ramona as tense as the trailer teased?

Ramona is the person I think people anticipated me having the most conflict with, but it really didn’t turn out that way. We go at it at various points, mainly because Ramona is a runner from conflict, and I can be very direct. I’ve got the memory of an elephant, so if you do or say something that doesn’t sit well with me, I’m going to be side-eyeing you until we talk about it. I had to be really clear on where she stood with her value system around Black people in America, and you’re going to see that play out in a really big way pretty early on in the season. Once we got through those challenges, Ramona and I had the best of times together. We actually share very similar fashion sense, which is really peculiar, and we have the exact same body measurements and shared some clothes. We have a very unique, crazy relationship.

In the premiere episode, you mention that you’re dating someone. How much will we see that relationship play out on camera?

I cannot give it all away. What I will tell you is I’m very transparent the whole time through. I hold no cards back, and I really put my heart on my sleeve in a way I’ve never done in my whole career. I think that was the biggest challenge for me. I’ve been fiercely private about my personal life my entire public career. You will not see a trace of anybody on my Instagram or social media or anything. I’ve always wanted to lead with the work and be taken seriously as an attorney and a journalist and all the things. And that’s the opposite of Housewives. You have to lead with your heart and your spirit and all the emotions. It’s so scary for me, but I think it was a really big part of my journey.

Were you able to slow down your “golden ambitions to dominate the world,” as you put it, in order to focus on starting a family?

I’m still working on it. It’s a hard train to slow down. I’m very much of a generation of young women who were told to go to school and get a great career and dominate. Nowhere along the road did anybody say, “Oh, by the way, take a beat and fall in love, build a successful marriage, and start a family.” I think I convinced myself that I didn’t need a husband — especially after my first divorce, which was 10 years ago. It was what I call a starter marriage: in, out, done within a year. It was like OK, been there, done that, all men slow me down, not interested. I definitely don’t need kids, they cost too much, and they eat into your shoe budget. Then I found myself about two years ago realizing that I would love a love story, and I want a second chance at that. I want to be a good wife, and I want to put someone else first, and I want to be a mom and I want to have a legacy. I want those things, and I’m scared to death that I won’t have them. But I know I won’t have them if I don’t try to get them.

Are you single right now?

You’ve said you joined Fox News to be a disruptor. How did that experience prepare you for RHONY?

There’s a lot of correlation. I don’t think I joined the 13th season of RHONY as the first Black Housewife to be comfortable. I also came to be disruptive, but in the most positive way, just like I did at Fox News. That was the challenge: to push and be pushed as well. I’m not somebody who likes complacency or complicit behavior.