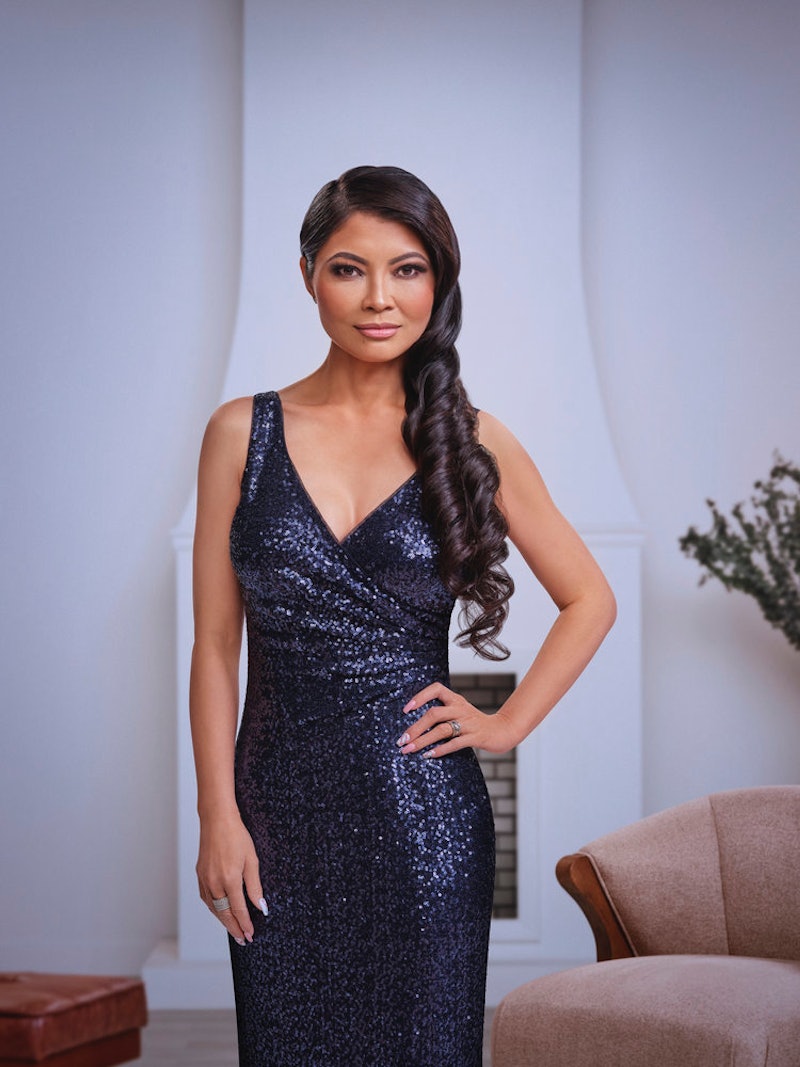 The Real Housewives of Salt Lake City star Jennie Nguyen had a harrowing journey to the United States. After growing up in Vietnam, she and her family escaped by boat when she was 7 years old. “During our journey, we were captured by the Thai pirates, and we were placed in a Thai refugee camp,” she explained in a sneak peak of the RHOSLC Season 2 premiere. “About three years into the camp, we were sponsored by a Christian church and that's how we ended up in Long Beach, California. And so that’s how we came to America.”

Introduced to the Housewives by her longtime friend Lisa Barlow, Jennie is not afraid to ask the tough questions and has no problem jumping right into the drama, according to her Bravo bio. Here’s everything else to know about the newest RHOSLC star.

Described by the network as a successful businesswoman, Jennie owned several medical spas, but recently sold them in order to become a stay-at-home mom of three. Her eldest son, 15-year-old Atlas, is best friends with Lisa’s 16-year-old son Jack. She also has a 12-year-old son named Triton and a 9-year-old daughter named Karlyn, who already published a children’s book, The Mysterious Forest.

Jennie herself is 45, but lowered her official age by two years upon arriving in the U.S. so she could attend kindergarten.

Jennie is married to chiropractor Dr. Duy Tran, who founded his own Murray, Utah practice, HealthQuest Chiropractic, in 1992. According to the company’s website, Dr. Tran “has been keeping world-class and Olympic athletes, medical providers, celebrities, and working-class people aligned and going strong for the past 28 years.” He’s also worked as a health advisor on the local Good Things Utah morning show, served on the Board of Directors and as the Chairman of Ambassadors for the Murray Chamber of Commerce, and taught as a professor at the University of Utah.

The RHOSLC Season 2 trailer shows Duy pressuring Jennie to have more kids — joking that he’ll find a sister wife if need be. “I’m pissed,” Jennie jumps up and yells. Expect that storyline to play out throughout the season.

Up until late last year, the self-described foodie’s Instagram feed consisted almost exclusively of culinary-themed photos. More recently, she’s used her social media platforms to promote her “Love Consciously & Live Healthy!” motto by posting motivational quotes, uploading videos of her cooking on YouTube, and sharing her Beauty Hacks with Jennie and Life Hacks with Jennie series, which include tips about how to achieve flawless skin, properly use a salt and pepper shaker, and avoid getting splinters from wooden chopsticks.

In February, Jennie shared a TikTok video in which she spoke out against anti-Asian hate. “Since the start of the pandemic, violence against Asian-Americans has been on the rise,” she captioned the video on Instagram. “That’s not acceptable, and changing it is up to us. Choose Love Over Hate.”

Jennie is also the owner of an ️impressive car collection and can handle an assault weapon, In March, she shared photos of herself taking her M4 rifle to a gun range, describing it as “relaxation” time.

Jennie’s Relationships With The Cast

As Lisa describes on RHOSLC, she and Jennie have been friends for over 10 years. They were both pregnant together, and their sons are friends who attended the same private school. “She tapped me on the shoulder when we were having a Thanksgiving feast at the school. She’s like, ‘You are Atlas’ mom and that’s Jack’s best friend,’” Jennie explains in a confessional scene. “And I was like, ‘Oh, awesome!’ and we turn around and we bump bellies because we were like out to here.”

On Instagram, Jennie has promoted Barlow’s Vida Tequila brand (“My favorite tequila EVER!”) and Fresh Wolf products. “Just received these amazing products from my favorite house wife of Salt Lake City, Lisa Barlow,” she captioned a December post. Several months later, she posted throwback photos of her, Lisa, and their husbands, writing, “True friends stand the test of time!”

The RHOSLC first look also shows Jen Shah affectionately calling Jennie “a little firecracker,” and in one scene the Housewives newbie seems to be intervening in Jen’s ongoing feud with Meredith Marks — “throwing down” and dropping F-bombs, as Heather Gay comically observes.