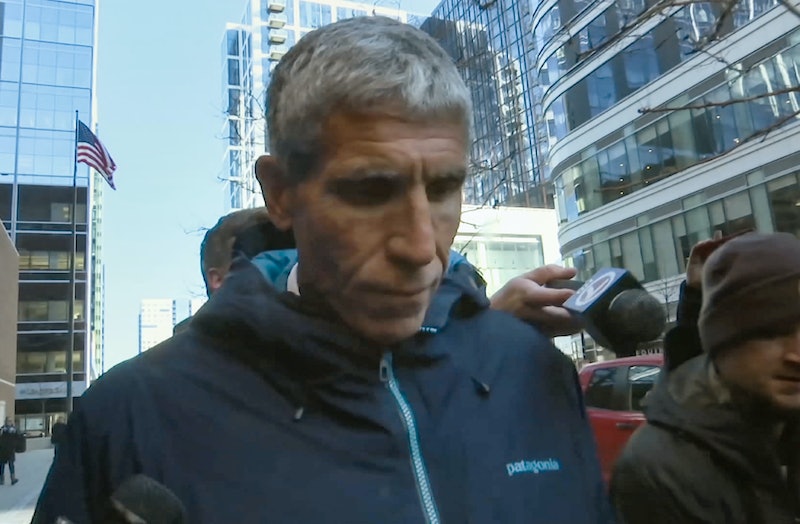 A dramatic new Netflix documentary, Operation Varsity Blues: The College Admissions Scandal, dives into the widespread fraud uncovered in 2018. Dozens of wealthy parents were found to have cheated to get their children into colleges and universities, and at the center of the scandal was the man who started it all, William “Rick” Singer. But he didn’t just leap into cheating the college admissions system one day. At first, Rick Singer and his now ex-wife, Alison, worked together at a college prep company he founded called Future Stars, according to USA Today; it was their main source of income while raising their son. But after their divorce, things spiraled out of control for Singer.

In early 2019, Singer pleaded guilty to multiple criminal charges, including fraud, money laundering, racketeering, and obstruction of justice, per the Los Angeles Times. Prosecutors said that from 2011 until 2018, when the scandal was uncovered by the FBI, Singer collected $25 million in tax-deductible donations to his nonprofit “charity” Key Worldwide Foundation. He then used the money to bribe people involved in the college admissions process to get wealthy children into elite schools. Some of his most notable clients included actors Felicity Huffman and Lori Loughlin, both of whom have since served time for paying to fraudulently help their children get into school. Singer is still awaiting sentencing.

While USA Today reports that the full timeline of Singer’s crimes remains unclear, prosecutors used evidence from as early as 2011, the same year Singer’s wife, Alison, filed for divorce. She cited “irreconcilable differences” as the reason for their split. The outlet reported that the two had married in 1989, when Singer was an assistant basketball coach for Sacramento State University. After he was let go from the position in 1992, he and his wife collaborated on a business.

By 1994, he was running Future Stars to provide students with private college counseling, per the Sacramento Bee. Then, in 1996, they welcomed their son, whose name has not been made public. USA Today also reported that Singer made $366,000 annually from Future Stars, while Allison made $2,400 annually as an adviser to the business. As part of the couple’s divorce settlement, Singer helped provide for his then-teenage son. He agreed to $3,000 in child support per month, funding his son’s tutoring and summer programs, and paid $80,000 for his college education.

Singer’s son eventually went to college in “the Eastern District of Missouri,” which is as specific as court filings get about the young man, per the Boston Herald. (Among the many schools Singer’s fraud scheme included, none was in Missouri.) The outlet reported that after undergrad, Singer’s son planned to pursue a Master of Arts degree at the same campus. In early 2019, the Boston Globe reported that Singer was allowed by a judge to visit his son at school while waiting for his sentencing. Court documents said that Singer hoped to “visit with his son [on] a fairly regular basis.”

There are no reports of what Alison went on to do after divorcing Singer. Both she and her son, who is about 25 now, seem content to stay out of the negative limelight that now follows Singer.

More like this
Here’s Everything Coming To & Leaving Netflix In February
By Jake Viswanath
Rachel Nickell’s Son Wants The Police To Take Accountability Over Errors
By El Hunt
The Dog & His Handler In 'Gunther’s Millions' Are Worth, Well, Millions
By Gretchen Smail
You Might Want To Rewatch This Key 'On My Block' Scene To Understand 'Freeridge'
By Grace Wehniainen
Get Even More From Bustle — Sign Up For The Newsletter
From hair trends to relationship advice, our daily newsletter has everything you need to sound like a person who’s on TikTok, even if you aren’t.