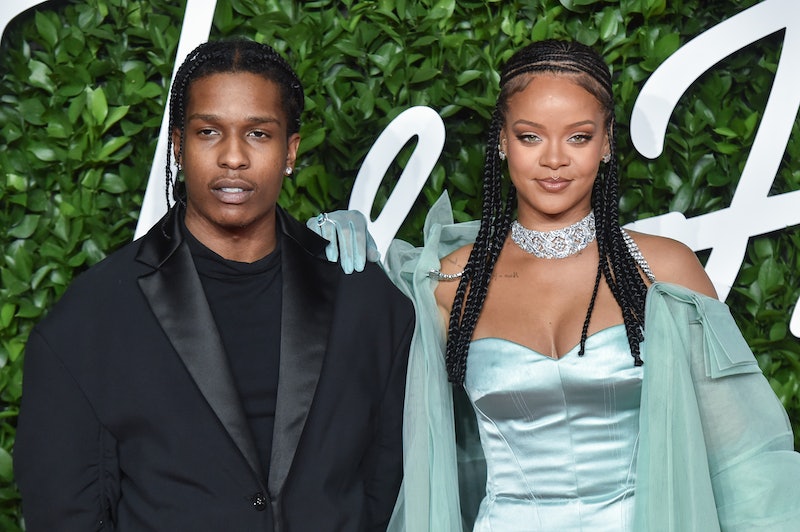 Not only is Fenty Skin clearing the world's acne and minimizing people's pores, but it also seemingly improved Rihanna's love life — albeit indirectly. Rihanna is reportedly dating A$AP Rocky after months of romance rumors. A source confirmed the news to People after Page Six spotted the rapper and Fenty Beauty maven having dinner with friends in New York City on Saturday, Nov. 28.

Romance rumors have been swirling between the two since it was reported that Rihanna split from her billionaire boyfriend Hassan Jameel in January 2020. "Their lives were too different and it was hard to maintain a relationship," a source told People at the time. The next month, she was seen with A$AP Rocky in New York, and The Sun claimed that they were casually seeing each other. However, the reports were denied by E!, who said that the "Kiss It Better" singer wasn't dating anyone. "She wants to be single and isn't going to jump into something," a source told the outlet. "She's hanging out with ASAP Rocky, but she is not dating him. They have a long history and she's just having fun."

Indeed, the couple does go back quite a few years. In 2012, when Rihanna was releasing music, the rapper was featured on a remix of her 2012 hit "Cockiness (Love It)" before going on to be the opening act on the U.S. dates of her 2013 Diamonds World Tour. Later that year, she appeared in his "Fashion Killa" music video, where the two engaged in some flirty PDA. The pair stayed friendly after, attending Virgil Abloh's debut Louis Vuitton menswear show in 2018 and posing on the red carpet together at the 2019 British Fashion Awards.

More recently, Rihanna featured A$AP Rocky in her first Fenty Skin campaign in July 2020, and they even did interviews together to promote the launch of her new line. In a video for Vogue, Rihanna joked that her skin type was "just as complicated as men are." "Y'all always try to say women are complicated... it's y'all!," she told Rocky. When she turned the tables on him, the rapper described his own skin as "handsome."

In a video for GQ, A$AP Rocky said the hardest part about working with the Fenty Skin founder was trying to stay professional and not goof off around her. "This sh*t is comedy," he said. "The hardest part is not having too much fun. You just forget that it's still work at the end of the day."