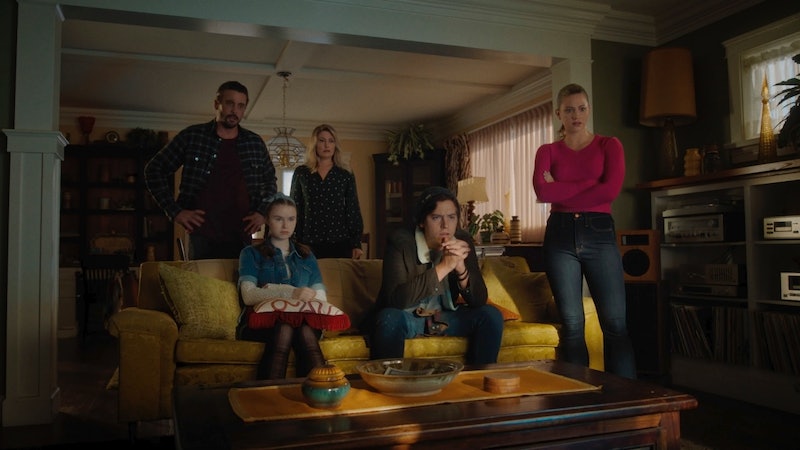 Spoilers ahead for Riverdale Season 5, Episode 2. As Riverdale rushes to wrap up the loose ends left by its shortened fourth season, the show has finally revealed the identity of "the Auteur" making creepy videos of Archie and the gang. Just as some fans suspected, it was Jellybean who was responsible for the tapes. Her rationale (as relayed to FP by Jughead) was that she didn’t want Jughead to leave home just as they were starting to reconnect.

“She figured the best way to keep me in town was a mystery,” Jughead explains at the end of the Jan. 27 episode. After Jellybean and her old G&G friend Ricky reconnected, he showed her some of the truly weird (read: snuff) videos available at their local video store. The two began making voyeur videos of people's houses, then roped in their group of friends, and eventually escalated to filming re-creations of Riverdale’s most notorious crimes.

The clues were there all along. Jellybean was privy to the details of the crimes both through her relationship with Jughead and Betty and via Blue Velvet Video (where she apparently just rented the video of Jason Blossom dying. Very normal!). In last week's episode, Betty asked Jellybean if she still had fake blood — something that surely came in handy for creating fake snuff films. She and Jughead also just so happened to run into Jellybean at the Auteur's film screening. And given how often Jellybean is shooed away by the adults or just completely off-screen, she had plenty of time to pull together some fairly competent video productions of fake crimes to entice her brother with.

Even still, the whole thing is pretty dark — though it's pretty swiftly mostly moved on from after FP forgives her. “I don’t think she understands the enormity and the darkness of what she did,” Jughead says.

Of course, Jellybean didn't actually murder anyone, as Betty and Jughead thought the Auteur was doing. That was Charles, their half-brother and FBI agent who’s been helping them investigate the videos.

In the Jan. 27 episode, Jughead and Betty find his wiretaps and compel him to confess to murdering Brett, Joan, and David. Like Dexter before him, Charles claims to have just been killing people to keep “degenerates” who hurt his family off the streets. Besides, Brett was going to spill the details on his secret relationship with Chic, so the two killed him.

With both the Auteur and the latest Riverdale serial killer unmasked, the path is clear for Riverdale to cruise on into a peaceful high school graduation next week. Just kidding — this is Riverdale; we all know Veronica’s promises to leave high school with “no big drama" won't come to fruition.