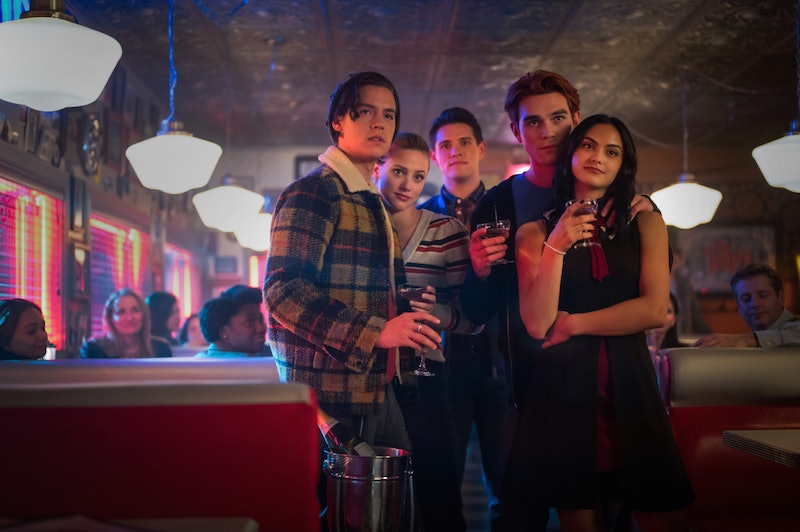 After just two weeks of filming, Riverdale has been forced to shut down production in Vancouver due to a backlog of COVID-19 tests. The testing delays have also impacted Supergirl, Charmed, Nancy Drew, and DC Legends of Tomorrow, according to The Hollywood Reporter. Other CW shows, Batwoman and The Flash have also reportedly been affected, a source told Variety.

"This is a situation we are continuing to monitor hour by hour and day by day. Safety is of the utmost importance," one studio exec told THR. A local Vancouver production executive explained that they've been relying on a 48-hour turnaround for tests, and have been in touch with the lab. "We’ve been assured they will soon be able to meet the demands of the industry," they said.

It's unclear when filming will resume, but until then, there are some new Season 5 details that will hopefully tide you over. On Sept. 30, it was announced that Drew Ray Tanner, aka Fangs, has been promoted to a series regular for the fifth season. "We're all thrilled he's joining us for season five as a series regular, living with on-again, off-again boyfriend Kevin Keller and Serpent Queen Toni Topaz," showrunner Roberto Aguirre-Sacasa told E! News. "Also happy to announce that we'll see more of Drew SINGING!" Seeing as Riverdale will make a seven-year time jump in Season 5, Fangs and Kevin living together makes sense. It's also interesting that Toni is living with Kevin and Fangs, but there is no mention of Cheryl. Could this be a hint that Choni doesn't make it past graduation?

In addition to Tanner, The Resident's Erinn Westbrook is joining the main cast of Riverdale in Season 5 as Pop Tate's granddaughter, Tabitha Tate, Deadline reported on Sept. 29. Tabitha is described as "ambitious," "entrepreneurial," and is looking to take over Pop's Chock'lit Shoppe so she can hopefully franchise it.

The addition of Tanner and Westbrook as series regulars follows Aguirre-Sacasa's declaration he would "do better to honor" the series' "actors and characters of color." His vow came after Riverdale star Vanessa Morgan (Toni Topaz) said in May the show sidelined its Black characters. Lili Reinhart, who plays Betty Cooper in the show, also commented on the matter in an August interview with The Los Angeles Times. "I mean, the show historically has been pretty white," Reinhart said. "Roberto is very conscious of it now to make sure that that doesn’t happen again and Vanessa doesn’t feel that she’s put in that position again." Currently, Riverdale's fifth season is slated to premiere sometime in January 2021.

More like this
Nicola Coughlan Shared A Lady Whistledown Excerpt From ‘Bridgerton’ Season 3
By Grace Wehniainen, Alyssa Lapid and Sam Ramsden
Alicent's Green Dress In 'House Of The Dragon' May Be An Act Of War
By Kadin Burnett
'The Rings Of Power' Episode 4 May Put A Face To Season 1’s New Villain
By Kadin Burnett
The New Bachelor Will Be Announced Next Week & Here Are The Top Contenders
By Grace Wehniainen
Get Even More From Bustle — Sign Up For The Newsletter