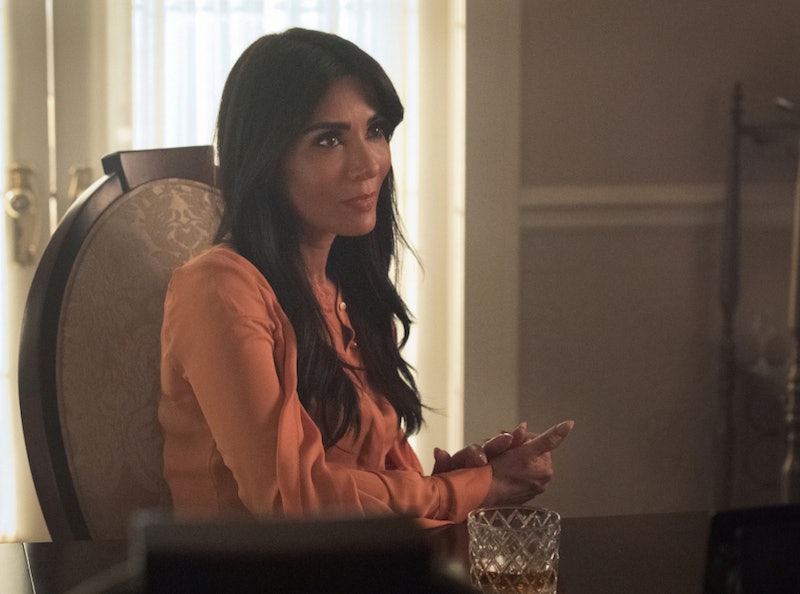 Expect Hermione Lodge’s final bow to be powerful. Riverdale actor Marisol Nichols opened up about Hermione’s final arc, revealing that she had some major ideas as to how her character should finish off the show. Both Nichols and her co-star Skeet Ulrich will leave the series by the end of Season 5, as reported back in February; and, according to Nichols, there was one particular Hermione plotline that she wanted to fix before leaving the series — one that showrunner Roberto Aguirre-Sacasa took into account.

"One of the things that was really important for me, if I was going to come back and wrap things up or do some more episodes, was that Hermione stick up for herself," Marisol told Entertainment Tonight in a virtual interview on Wednesday, Oct. 21. "It was really bothering me that she was in, for all intents and purposes, kind of in an abusive relationship." She added of Hermione’s relationship with ex-husband Hiram Lodge (Mark Consuelos), “She changed who she was to be with Hiram and, not that she's innocent, but it bothered me."

"It bothered me just as a woman," Nichols continued. "I wanted to see her have some strength and some power and stand on her own two feet and not be stupid — for lack of a better word." The actor then revealed that Aguirre-Sacasa "honored that and I'm very happy about what I'm doing so far."

While Ulrich has revealed that it was his choice to leave the series (he said he "got bored creatively" in a blunt Instagram Live session), Nichols suggested that the same could not be said for her departure. "How do I put this? That's a good question," Nichols told ET when asked about her decision to leave. "It wasn't necessarily a choice." She added, "It's just kind of what happens."

Nichols also confirmed that the series will begin production on its time jump (seven years into the future, to be precise) this week. It comes after Season 4 came to an early end in May due to COVID-19. At the time, Aguirre-Sacasa revealed that Season 5 would resume with prom and graduation, and eventually “leapfrog over [those] four years” of college. "When we come back in season 5, we'll have a very big mystery to unravel and a lot of relationship stuff to sort out," Aguirre-Sacasa teased in May. "I think we want to drop you in the middle of something crazy."

More like this
A New 'And Just Like That' Table Read Pic Confirms A Key Character's Return
By Jack Irvin and Grace Wehniainen
'The Lord of the Rings: The Rings of Power' Revisits Iconic Spots From 'The Hobbit'
By Darshita Goyal
Netflix Reveals First Look At Wednesday In The 'Addams Family' Spinoff Series
By Bustle Editors
Nicola Coughlan Shared A Lady Whistledown Excerpt From ‘Bridgerton’ Season 3
By Grace Wehniainen, Alyssa Lapid and Sam Ramsden
Get Even More From Bustle — Sign Up For The Newsletter