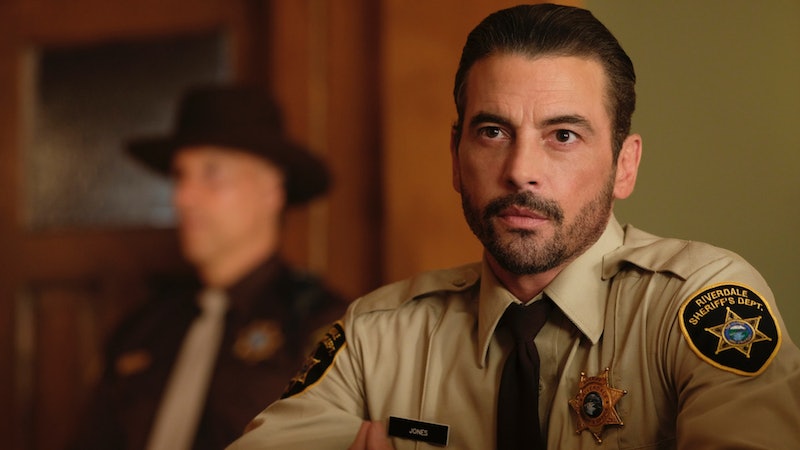 Some fans were shocked to learn in February that F.P. Jones was hanging up his sheriff badge for good on The CW series. And now Skeet Ulrich is revealing the real reason why he's leaving Riverdale. According to TVLine, Ulrich admitted during a recent Instagram Live, "I'm leaving Riverdale because I got bored creatively. That's the most honest answer."

Ulrich doesn't play a main character on Riverdale. His character, F.P., is a significant supporting role, and no doubt a valued part of the Riverdale family, but, it's not hard to see how he could want more. The drama of the show mainly revolves around the younger cast, including Ulrich's on-screen son, Jughead Jones, played by Cole Sprouse. So to learn that Ulrich is exiting due to creative differences isn't surprising.

Ulrich's Riverdale exit after Season 4 was first announced on Feb. 23. "I’m proud to have been part of such a talented group of people, in front of the camera and behind," he told TV Line in a statement. "But I've decided that it’s time for me to move on to explore other creative opportunities." Despite getting "bored creatively," Ulrich's Riverdale experience is one he'll always cherish. "I may be leaving Riverdale but my experience over the last four years will never leave my heart," he wrote in a Feb. 23 Instagram.

In addition to Ulrich, Hermione Lodge actor Marisol Nichols is also exiting Riverdale. Despite their departures, showrunner Roberto Aguirre-Sacasa told TVLine in May that they will both return for the first three episodes of Season 5, which will pick up where the shortened Season 4 (due to COVID-19) left off. Fans will also get to see prom and graduation.

Fans don't know how F.P. and Hermione will be written out of the show, though the planned Season 5 time jump could be an opportunity. What we do know, however, is that they will not be victims of the next Riverdale serial killer. "The truth of it is, and this isn’t a spoiler, but neither Hermione nor F.P. are being killed," Aguirre-Sacasa also told TVLine. "So my hope is that they are a part of Riverdale in a real way as long as there’s a Riverdale.”

More like this
'The Queen’s Gambit' Season 2 Tweet Wasn’t From Anya Taylor-Joy
By Mary Kate McGrath, Jack Irvin and Grace Wehniainen
Here’s Everything Coming To & Leaving Netflix In February
By Jake Viswanath
Netflix Shut Down 'Bridgerton' S3 Rumours About A “Very Dark” Storyline
By Bustle
David Schwimmer & Gemma Collins Join 'Celeb Bake Off' & Twitter Can't Cope
By Sam Ramsden
Get Even More From Bustle — Sign Up For The Newsletter
From hair trends to relationship advice, our daily newsletter has everything you need to sound like a person who’s on TikTok, even if you aren’t.