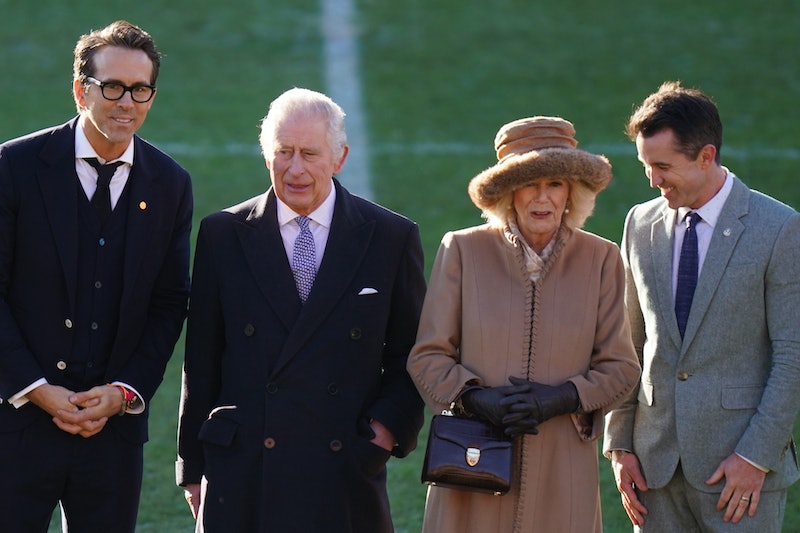 It’s a good thing that Camilla, queen consort reportedly doesn’t mind The Crown, because after she and King Charles III met Rob McElhenney on Dec. 9, the It’s Always Sunny in Philadelphia star couldn’t help but reference the hit Netflix drama series. McElhenney and Ryan Reynolds met the royals in their role as co-owners of the football club Wrexham AFC. Following the meetup, both actors showed off photos on social media, with McElhenney captioning an Instagram post, “Season 6 of The Crown is gonna be [fire].”

Separately, his wife, It’s Always Sunny star Kaitlin Olson, posted another photo from the royal visit and joked, “Take it easy, Camilla.” Comedian Jenny Johnson jumped in, too, commenting on her post, “The next season of The Crown is gonna be juicy!” And then there was Reynolds, who added, “I tried to pry them apart but I was quickly neutralized by security.”

Many of their fans appreciated the jokes, but The Crown can be a sore subject for some Brits. Ahead of Season 5 — which features some of the more infamous parts of Charles and Camilla’s relationship — Dame Judi Dench wrote a letter to the UK’s Times that called for a disclaimer to be added to clarify it is a “fictionalised drama.” She also claimed the show “seems willing to blur the lines between historical accuracy and crude sensationalism.”

Reynolds avoided the possible controversy by centering his posts on Welcome to Wrexham, the Hulu documentary series that chronicles his journey with McElhenney as newbie football club owners. On Instagram and Twitter, he shared a photo of himself and Charles and benignly wrote, “Welcome to Wrexham Season 2: Charles in Charge.” (Many people did, however, worry that the Deadpool star appeared to be touching the king, which would be a no-no.)

The first season of the docuseries followed the two co-owners on their unlikely quest to get their team promoted from the National League to the next level above, the English Football League Two, with the ultimate goal of reaching the Premier League. Though they had no experience as team owners and, frankly, little knowledge of the sport (it’s really time to learn the offsides rule, guys), they did make good strides. They also raised the profile of the town the team calls home, Wrexham, Wales, as evidenced by their visit from the King of England (and former Prince of Wales). We’ll see how they progress in the upcoming Welcome to Wrexham Season 2.

More like this
Helena Bonham Carter Doesn't Think 'The Crown' “Should Carry On"
By Sam Ramsden
Everything To Know About The 'Daisy Jones & The Six' TV Series
By Maxine Harrison and Brad Witter
Parminder Nagra Definitely Relates To Her 'Maternal' Character
By Maxine Harrison
Twitter Is Burning As Phoebe Dynevor Reveals Daphne’s 'Bridgerton' Exit
By Sophie McEvoy
Get Even More From Bustle — Sign Up For The Newsletter
From hair trends to relationship advice, our daily newsletter has everything you need to sound like a person who’s on TikTok, even if you aren’t.