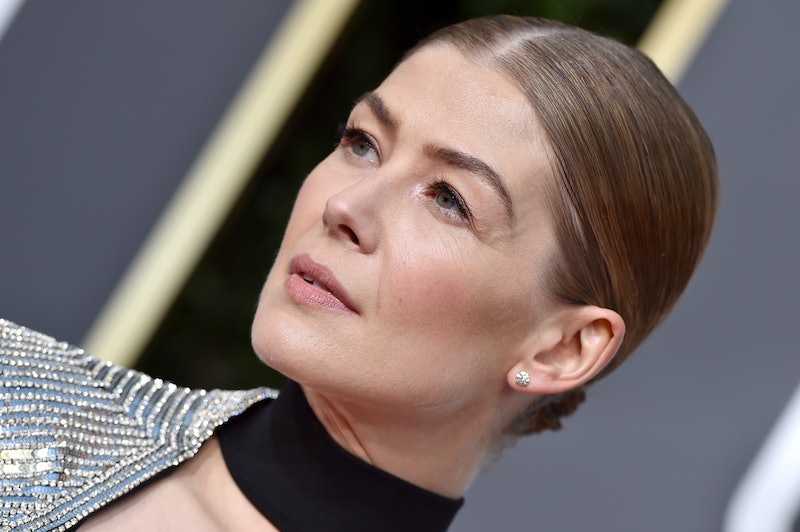 Celebrities are no stranger to airbrushed images however British actor Rosamund Pike has hit out at "body tuning" photographs, claiming they are causing people to lose their "grip" on what their bodies really look like.

The 42-year-old actor, who is currently starring in hit Netflix film I Care A Lot, called out the industry's photoshop habits in a recent interview with Kelly Clarkson.

Pike claims her body been repeatedly altered in past press photos with everything from her eye colour to her cleavage being changed.

"For the poster for Johnny English, my breasts were augmented," she explained. "In the poster for the character shot, I've got a really impressive chest. Which I don't have."

Pike starred alongside Rowan Atkinson in the popular spy film back in 2011 and played Kate Sumner, a behavioural psychologist at MI7.

In the photo in question, she's seen wearing a fitted red dress and her eyes were made to appear browner, but her body was also tweaked.

"I still don't quite know why. Those are the obvious times, right? When you do notice, 'Oh, I've got brown eyes,' or, 'I've got massive breasts,'" she said.

Pike eventually had the image removed but says images of celebrities are so regularly changed that it's easy to lose what "you really look like."

"[T]here's probably countless times where our image is doctored and we don't notice it," she said, "because I think we're all losing our grip on what we really look like."

Rosamund Pike is currently starring as ice queen Marla Grayson in dark thriller comedy I Care A Lot. In the acclaimed film, Pike's character's power-suited, sharp-bobbed image is one to be both feared and revered — just try and photoshop Grayson, I dare you.

More like this
Everything To Know About The 'Daisy Jones & The Six' TV Series
By Maxine Harrison and Brad Witter
Michaela Coel Has Some *Thoughts* About The Nepo Baby Discourse
By Maxine Harrison
Turns Out George Clooney Is A Huge Fan Of This Classic British Game Show
By El Hunt
Alan Carr's 'Changing Ends' Is A Witty Sitcom Based On His Own Life
By Darshita Goyal
Get The Very Best Of Bustle/UK
Sign up for Bustle UK's twice-weekly newsletter, featuring the latest must-watch TV, moving personal stories, and expert advice on the hottest viral buys.