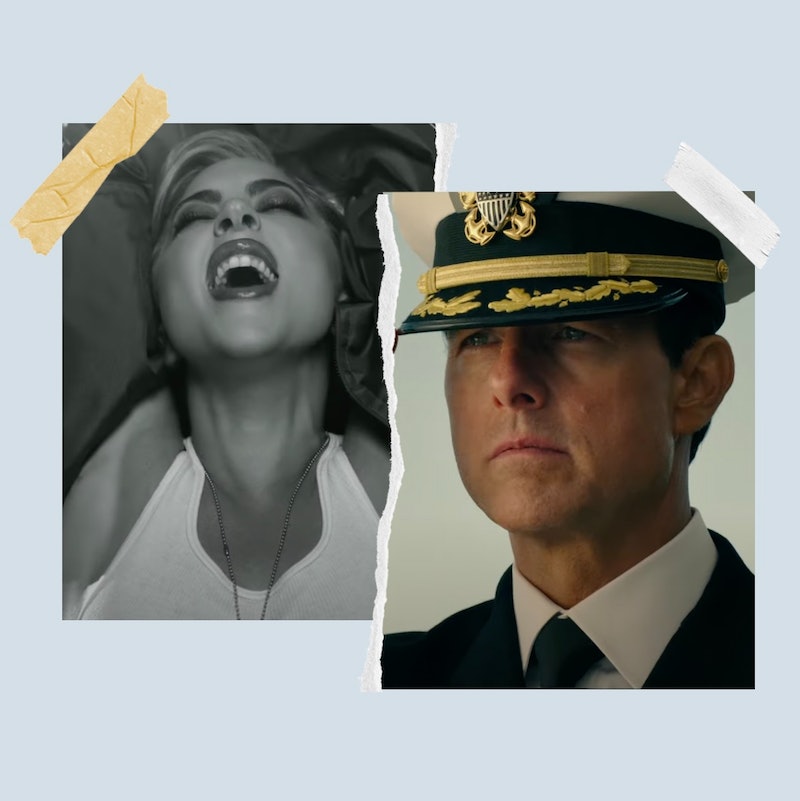 Tom Cruise is in full promotional mode as he gears up for his new movie Top Gun: Maverick, which flies into theaters on May 27. After arriving via helicopter at the film’s world premiere in San Diego this week, which took place on an aircraft carrier, the action star revealed how it was working with Lady Gaga on the movie’s music. The 13-time Grammy winner wrote the film’s soaring ballad “Hold My Hand,” and she released the music video for it on May 6.

“[Gaga] sent the song over … it was perfect,” Cruise told Extra. “I called her and I said, ‘You don’t understand. Your story, this story, how it comes together, it became the heartbeat of the score’.”

Cruise also talked about visiting Gaga in person at her Enigma residency. “I went to Vegas to thank her. We were working on the music at that point, and then I was going to come back and see her jazz show, and then the pandemic hit,” he said. “The next live show I was able to see was her jazz show. It was two years [later in May 2022]. It was a moment of celebration for us that finally people get to hear her music, and our film. It’s our film, together. ... And it builds up. The story of how her score is laid in to just build to that moment, I feel grateful to her for that.”

Gaga wrote “Hold My Hand” specifically for Top Gun: Maverick, though she didn’t reveal that she was involved until April 27 when she announced the single on Twitter, saying, “When I wrote this song ... I didn’t even realize the multiple layers it spanned across the film’s heart, my own psyche, and the nature of the world we’ve been living in. I’ve been working on it for years, perfecting it, trying to make it ours.” Gaga was involved in creating all the music for Top Gun: Maverick. A look at the soundtrack album, which is slated to drop May 27, shows she is credited on nine of the 12 tracks. Credited alongside Gaga are composers Hans Zimmer and Harold Faltermeyer.

Just days before the Top Gun: Maverick premiere, Gaga posted photos with Cruise at her Vegas residency Jazz + Piano. She captioned the snaps, which featured her planting a kiss on his cheek, “Thank you for coming to the show last night. I love you my friend @tomcruise.”

Gaga has a history of writing songs for movies. She was nominated for her first Academy Award in 2015 for “Til It Happens to You.” Co-written and produced by Diane Warren, the track was featured in the documentary The Hunting Ground, and it earned the pair an Oscar nod for Best Original Song. Three years later, Gaga was a double nominee, as she was up for Best Actress for her performance in A Star Is Born, while one cut from the film’s soundtrack, “Shallow,” competed for Best Original Song. Gaga and her collaborators Mark Ronson, Anthony Rossomando, and Andrew Wyatt all collected the latter prize.

After performing “Shallow” at the Academy Awards with duet partner and A Star Is Born co-star Bradley Cooper, the single shot to No. 1 on Billboard’s Hot 100, giving her another chart-topper and turning Cooper into a pop star nearly overnight. The song went on to earn them several Grammy nominations, and they shared the win for Best Pop Duo/Group Performance.

More like this
Lisa Marie Presley Reviewed Baz Luhrmann’s ‘Elvis’ Movie On Twitter
By Grace Wehniainen
Is Megan Fox Pregnant? MGK Gave A Shout-Out To Their “Unborn Child” Onstage
By Hugh McIntyre
Watch The Dramatic First Trailer For Netflix's Jennifer Lopez Documentary
By Alyssa Lapid
'Dirty Dancing's Jennifer Grey Wants Harry Styles To Be The Sequel’s Love Interest
By Grace Wehniainen
Get Even More From Bustle — Sign Up For The Newsletter